Located in Northwestern Hunan Province, China, about 320km (199 miles) away from the capital city of Hunan - Changsha, Zhangjiajie is China’s one of the top popular tourist destinations, attracting numerous tourists there each year. Wulingyuan Scenic Area of there, which includes Zhangjiajie National Forest Park, Tianzi Mountain, Yuanjiajie and Yangjiajie, was listed as UNESCO World Heritage Site in 1992. Once you are there, you will definitely marvel at the grotesque peaks, deep valleys, towering trees, flourishing forests, beautiful waters and marvelous caves seen in James Cameron's Avatar. 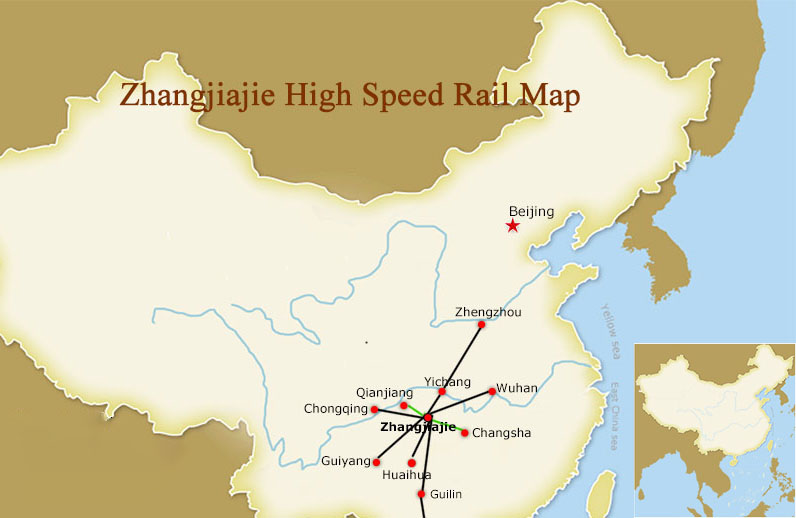 Changsha is not only the capital of Hunan Province, but also the largest and most important transportation rail hub in Hunan. There are already high speed trains available between Changsha and Zhangjiajie as the opening of Changsha Zhangjiajie Intercity High Speed Railway on December 26, 2019. Now the high speed train takes only around 3 hours. You can choose from more than 20 daily high speed bullet trains from 06:30 in early morning to 21:00 in the evening.

Our Advice: Considering time and money cost, train facilities and services, we strongly suggest you experience the newly-opened high speed train between Changsha and Zhangjiajie. 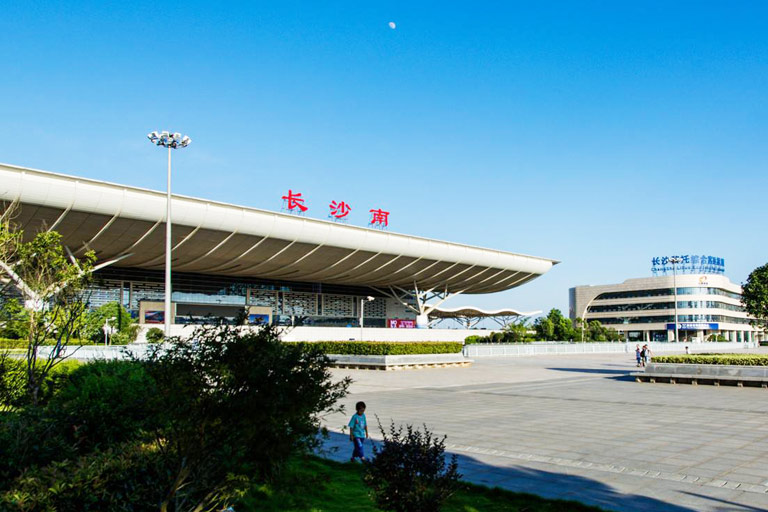 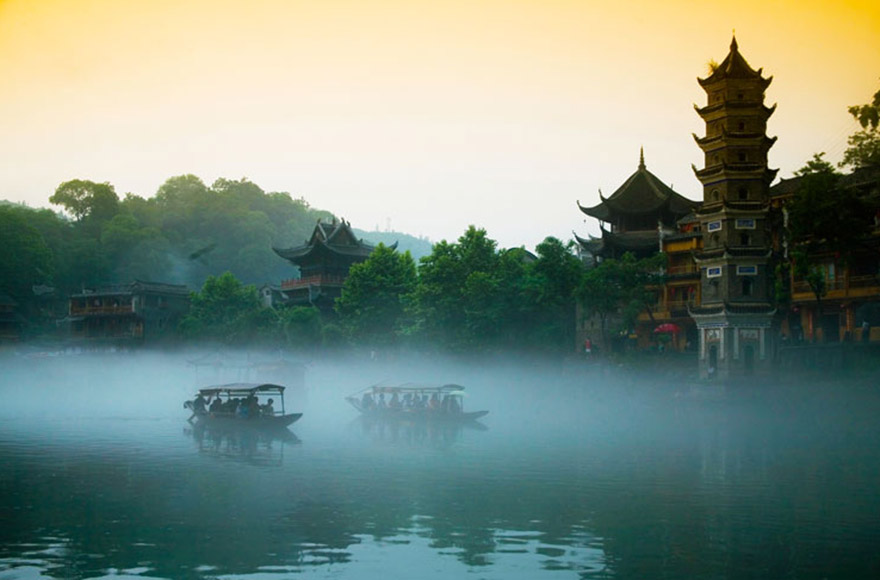 Boating on the Tuojiang River of Fenghuang

Except Beijing, Shanghai is also a top gateway city for foreign travelers to explore China. Known as the most energetic center of China, Shanghai enjoys huge transportation network, both high speed train and air to all across China. And the city itself is a perfect tourist destination to witness modern and traditional architecture, skyline and night view. However, there are no high speed train running from Shanghai to Zhangjiajie yet.

Normal Trains: If you want to travel to Zhangjiajie from Shanghai by normal train, you can chose from 3 daily trains (K Trains), which all are overnight trains departing at afternoon from Shanghai South Railway Station and arriving in Zhangjiajie in the next evening. The normal train needs about 19 to 22.5 hours in total. Soft Sleeper Berth is most recommended since you will have a quite long journey on board. 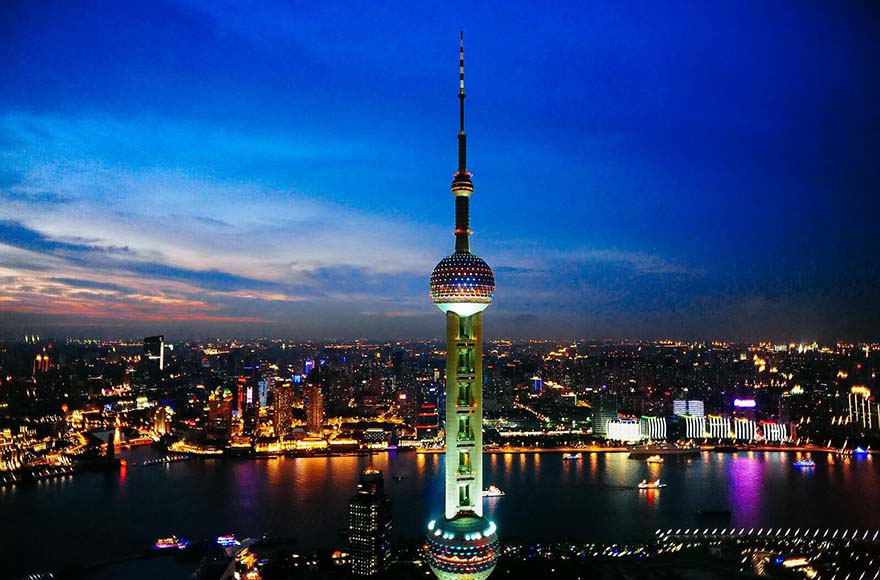 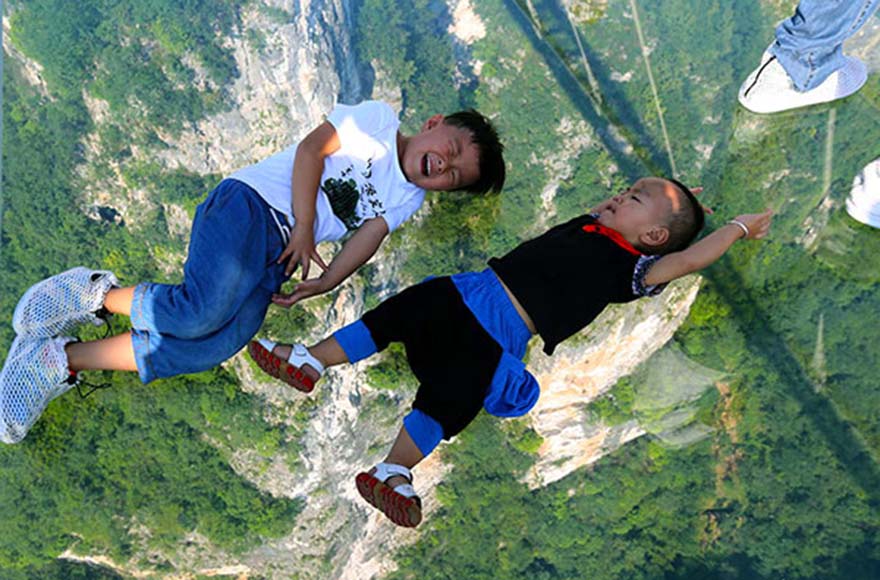 Yichang is located less than 300km (186 miles) away from Zhangjiajie. It always served as the starting or ending point of Yangtze River Cruise. The Yichang Zhangjiajie High Speed Railway will start construction soon. Therefore, in the future, it only takes about 1 to 2 hours to get to Zhangjiajie to view the natural masterpieces after the Yangtze River Cruise tour. 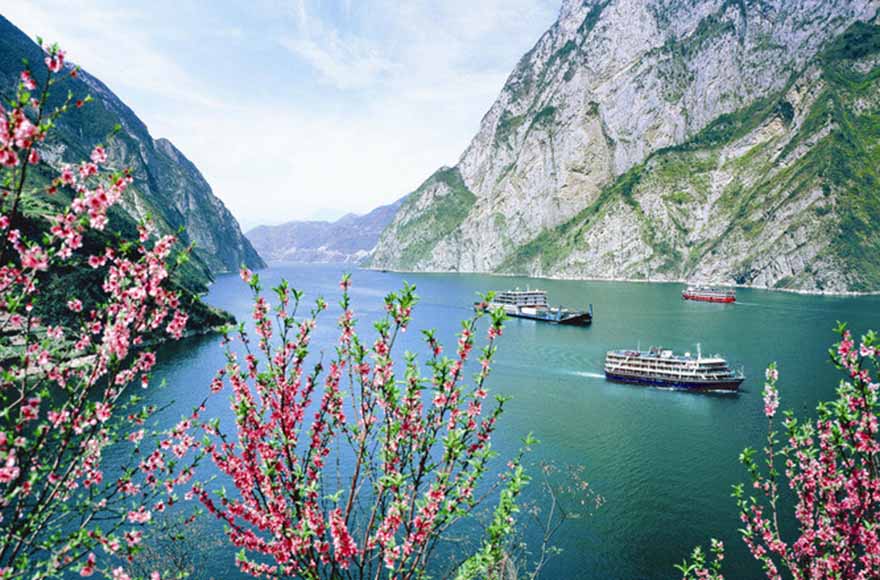 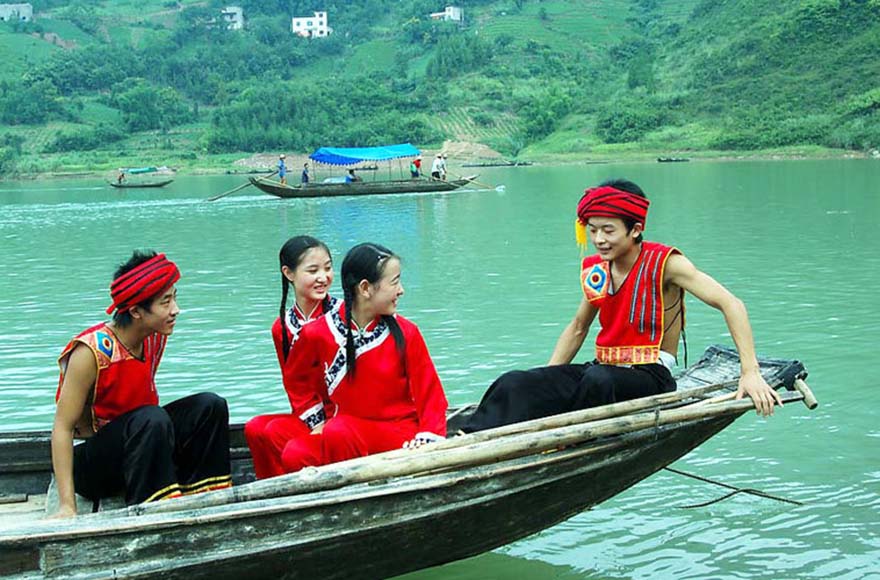 Most tourists would like to take Beijing as the first stop for a China tour, because it has frequent international flights and convenient rail link to domestic tourist destinations, and world famous Great Walls, Forbidden City and plenty traditional Chinese treasures. But, so far, high speed trains from Beijing to Zhangjiajie is not available, except a few ordinary-speed trains.

Normal Trains: Beijing sends 3 daily K-trains traveling to Zhangjiajie each day. All the trains arrive at Zhangjiajie on the second day, for the whole journey takes at least 23 hours. But thanks to the long-time journey, you can have a deep communication with the beautiful sightseeing outside the windows, traverse from Norther China to central area. Better get a Soft Sleepers to lie down comfortably during the journey. 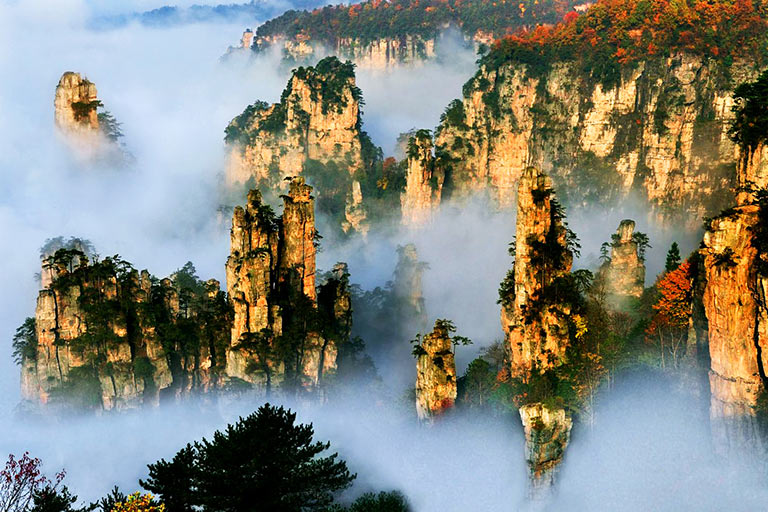 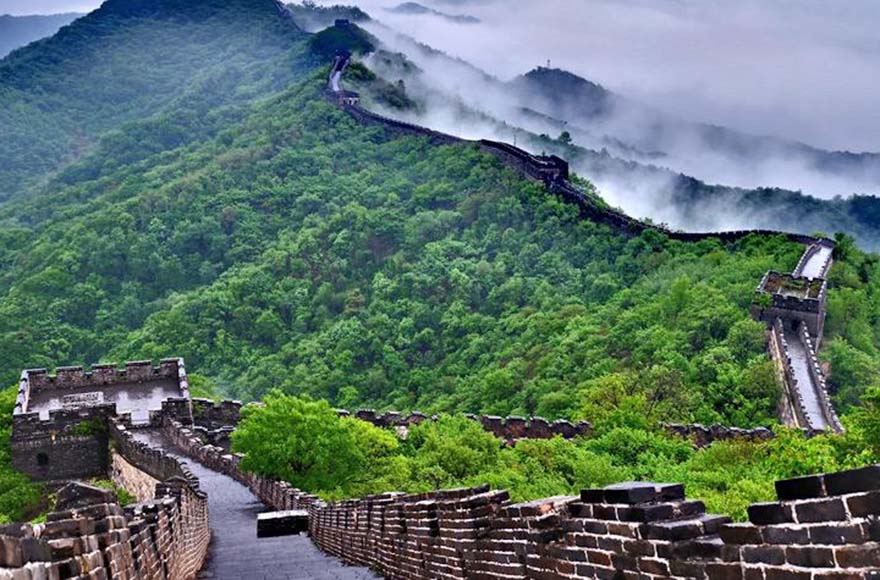 Guangzhou is a booming city in the south part of China. Compared with Zhangjiajie, the picturesque place to view the Charm of nature, Guangzhou is a perfect place to explore the rapid development of China, understand “China Speed”. A Zhangjiajie Guangzhou tour can give you a chance to feel about the two different charms in one single trip.

Normal Trains: Each day, Guangzhou delivers about 5 normal trains to Zhangjiajie, including one arriving on the same day and the rest are overnight ordinary-speed trains. The whole journey is around 12 to 14.5 hours. A Soft Sleeper Berth is strongly suggested than Hard Sleeper and Hard Seat since you will stay one night on the train. 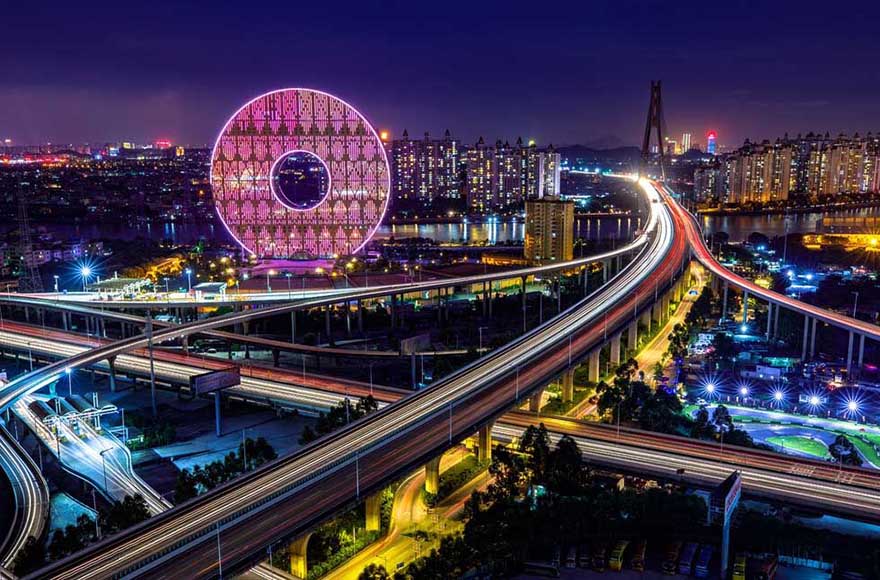 Chongqing, the 8D punk city, is about 7.5 hours away from Zhangjiajie, the avatar world, by car. However, since July 2021, you can now ride a bullet train to travel between the two cities, which cuts the travel time to less than 4 hours. What good news for those who want to travel Zhangjiajie, Chongqing and Yangtze River together! Those bullet trains run from Chongqing North Railway Station to Zhangjiajie West Railway Station. Every day, there are 4 bullet trains available, including one departing from Chengdu and making stopover in Chongqing.

Normal Trains: There are also about 2 normal K trains available. The train ride is about 6.5 hours from Chongqing North Railway Station to Zhangjiajie West Railway Station.

According to the offical High Speed Railway network plan, Zhangjiajie will build more high speed rails to link Zhangjiajie with popular destinations within Hunan Province, like Fenghuang Ancient Town, etc., and with places nearby Hunan, including Yichang and so on. Future high speed railways even will be built between Zhangjiajie and great ancient capital - Xian, the Kung Fu City - Zhengzhou, the idyllic Guilin...

Read more about Trains to Zhangjiajie! 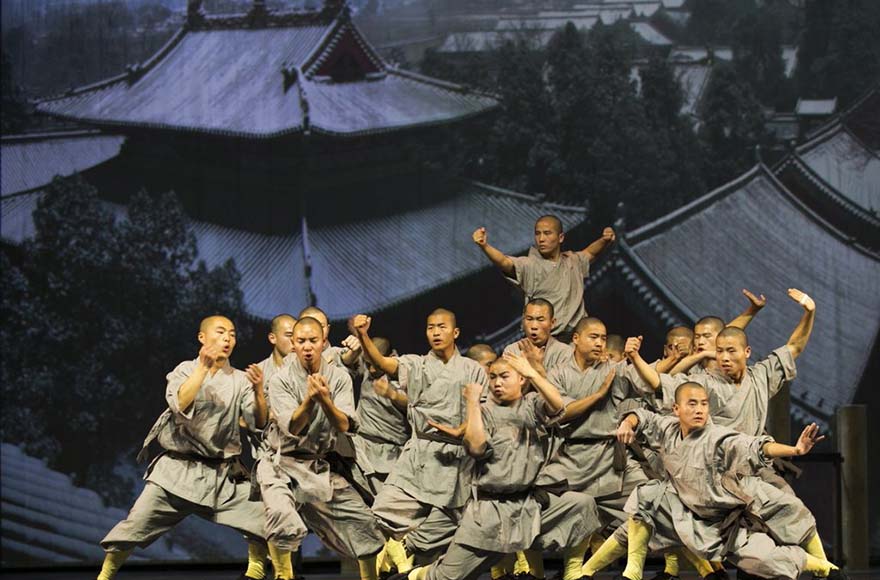 Transportation: Zhangjiajie West Railway Station is a recently-built high speed train station, which is located about 9km north of Zhangjiajie Hehua Airport, 5km to downtown and 18km to Zhangjiajie National Forest Park. You can transfer to downtown and take city bus (about 1 hour), or directly take a taxi (about 0.5 hour) to Wulingyuan Scenic Area.