About Temple of Heaven

The Temple of Heaven is the best place in Beijing to explore the traditional royal sacrificial culture of ancient China. At the same time, it is a pleasant place for leisure stay of walking or sightseeing, also for exploration of local culture.

The Temple of Heaven (天坛) is one of the most brilliant ancient architectures in China. It is also an outstanding masterpiece of classic imperial buildings throughout Chinese history. The site was firstly built in 1420 by Yongle Emperor (永乐皇帝), then expanded by the subsequent emperors of both Ming and Qing Dynasty, and had served as the holy place for emperors to pay homage to Heaven and to pray for a year of rich harvest.

Compared with all other sacrificial sites in the world, the Temple of Heaven is the largest not only in the size and scale, but also the forms and traditions. In 1998, the UNESCO listed the Temple of Heaven in the World Heritage Sites List with description as “a masterpiece of architecture and landscape design which simply and graphically illustrates a cosmogony of great importance for the evolution of one of the world’s great civilizations...”

Where is the Temple of Heaven

The Temple of Heaven is located in the central area of Beijing City which is also the attraction-gathering region. The famous Forbidden City (Palace Museum) and Tiananmen Square are conveniently situated at the northwest of Temple of Heave within short walking distance.

The visit of Temple of Heaven takes about 1~2 hours, so it is usually recommended to tour with other sites in Beijing city, such as the Tiananmen Square, Forbidden City, Summer Palace or Hutongs as a full day tour package which has covered convenient and private transfer to and around the Temple of Heaven.

Subway and public buses are also available for independent travelers. You can take subway Line 5, and exist at Tiantan Dongmen Station which is only several minutes’ walking away from the East Gate of Temple of Heaven. Many buses pass by the park, including 120, 17, 2, 35, 36, 504, 53, etc. History of Temple of Heaven

In 1644, Qing Dynasty was founded. Qing also followed the tradition of sacrifice of Ming Dynasty, and set the Temple of Heaven as the place for sacrifice. During the reign of Emperor Qianlong (乾隆, 1736~1795), a large-scale restoration and expansion was made. The old palaces, pavilions, stages, towers, path were renovated. Many new buildings launched, including the famous Echo Wall. Qianlong also ordered to plant thousands of trees around the temples. Temple of Heaven in Qing Dynasty

The Temple of Heaven is featured in precise structure, peculiar design and magnificent decoration. Covering more than 267 hectares (660 acres), the Temple of Heaven is the general reference of Huanqiu Altar (圜丘) and Qigu Altar(祈谷) which locate separately at an axle path from south to north – Danbi Bridge (丹陛桥). The most important building of Huanqiu Altar is Huangqiongyu Pavillion (皇穹宇). Qigu Altar has Qinian Pavilion (祈年殿), Huangqian Pavilion (皇乾殿) and Qinian Gate (祈年门), etc.

Ancient Chinese mythology believed the Heaven is circle and the Earth is square, which is fully embodied in the design of Temple Heaven. Two long-sketching cordons of wall surrounded the temple complex. The southern outer wall was built like a taller semi-circular representing Heaven. While the northern wall is shorter, rectangular, stands for the Earth. Both the Huanqiu Altar and Qigu Altar are round, and stand on two square yards.

The brilliant artisans of Qing Dynasty built supernatural sites - Echo Wall, Three-Sound Stone, and Conversation Stone according to the science of acoustics. Layout of Temple of Heaven

Important buildings in the park

Qinian Hall (Hall of Prayer for Good Harvests) is most magnificent building in the Temple of Heaven. It is a wooden triple-gable circular pavilion which is 38 meters high with a three-level marble stone base. The ancient emperors prayed for good harvests here. There are 28 pillars propping up the hall. The inner 4 pillars are large, and stand for four seasons. The middle 12 pillars represent the twelve months. The outer 12 pillars indicate 12 periods of a day.

Huangqiongyu Hall (The Imperial Vault of Heaven) is smaller with only one circular gable and one level of marble stone base compared with Qinian Hall. It is the place to enshrine the worshiping tablets of Gods. Inside the hall are pillars and vault decorated by beautiful paintings and carvings. Outside is a circular wall – Echo Wall which can transmit sounds over long distances.

Huanqiu Altar (The Circular Mound Altar) is an empty circular platform with three levels of marble stones. Vivid dragons were carved on the stones to stand for the emperors. The number nine stands for power as well as the emperors in ancient China. You will surprisedly find the balusters and steps are either the sacred number nine or its multiples. In the ancient time, the emperors burn the offerings for Heaven in a stove on the platform. 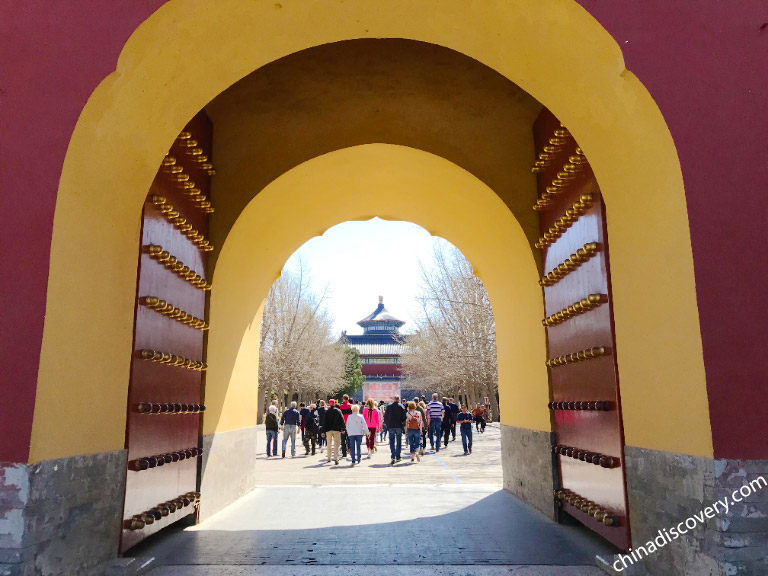 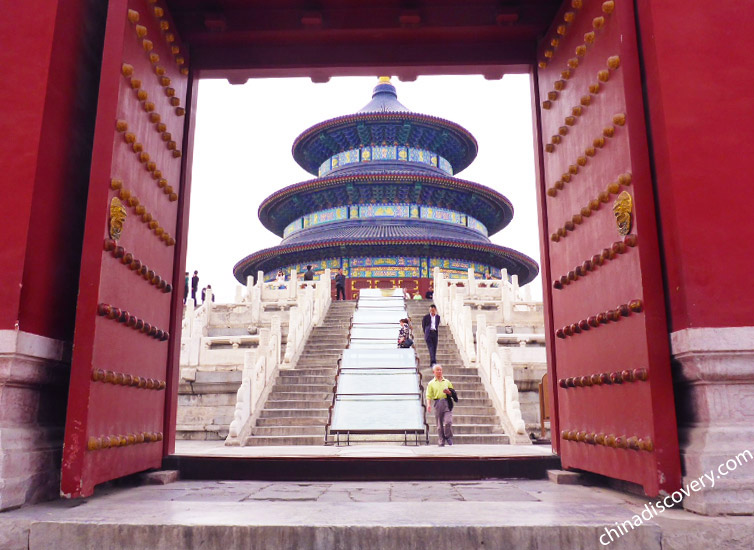 The Temple of Heaven is divided into two parts – public park area and tourist area. The public area now serves as an entertaining and morning exercise place for locals, and is open from early morning to later night. People living near usually like to take exercise or take part in folk activities in the park, such as running, cycling, playing Tai Chi. You can spare some time to stroll leisurely in the park to get involved in the interested activities, or just experience the peaceful atmosphere of local people’s living. 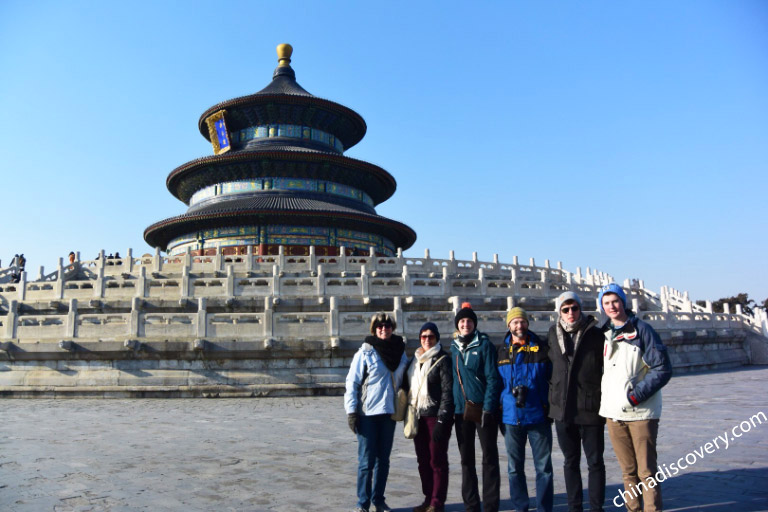 Local Acitivities in Temple of Heaven

There are four gates for entering and exiting the Temple of Heaven. For a smooth and pleasant visiting, travelers are suggested to start the exploration from the South Gate. Entering the gate, you will first visit the Huanqiu Altar and its surrounding, such as the Echo Wall, Kitchen for Sacrifice, etc. Then walk through the solemn path of Danbi Bridge, and get to the Qinian Hall. Explore the surrounding sites, and then continue your trip to the west of Qigu Altar to see the Flower Garden where the emperor stayed during sacrificial ceremonies. On the south of the garden is the Palace of Abstinence. After the sightseeing, leave the site from the West Gate. Sacrificial Culture of Temple of Heaven

In the ancient China, the emperors attached great importance on the sacrifice to the Heaven because they are believed to be the son of Heaven. They ruled the county on behalf of Heaven.

To show their respect and gratefulness to the Heaven, the emperors of Ming and Qing Dynasties moved from Forbidden City to encamp in the Temple of Heaven with their retunes twice a year. The emperor would pray to Heaven for good harvests on the altar. Grand ceremony must be held perfectly, because the smallest mistake would bring bad luck for the whole nation in the next years. 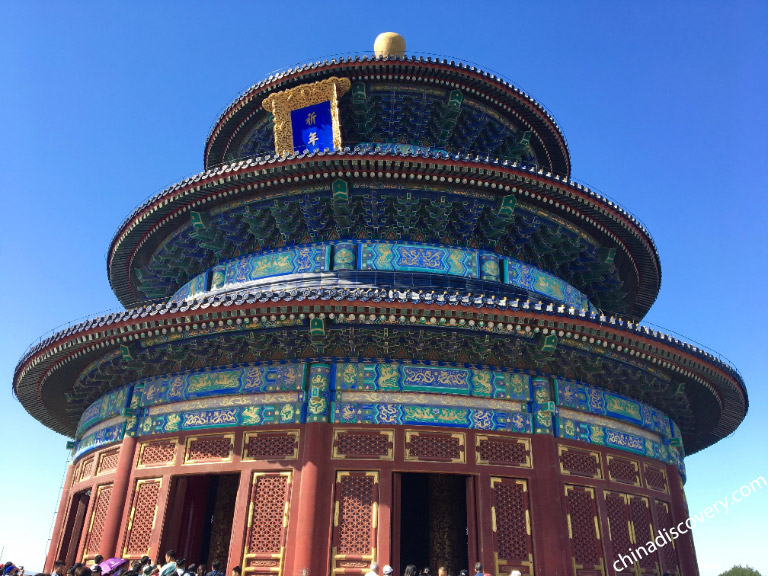 Sacrificial Ceremony in Temple of Heaven

March to May and September to November is the best time to visit the Temple of Heaven. But actually the Temple of Heaven is suitable for travel all year around. You can see the blooming lilac during the middle April. In summer days, the whole park is decorated by flourishing green trees. The cool autumn is the best season when the sky is clear and blue. Winter is cold, but you can get rid of the crowds, and focus on exploring the fabulous architectures.

Notes: Note: the price include both the entrance fee and tickets for sites for Qigu Altar and Huanqiu Altar(￥20), Sacrificial Music Hall and Fast Palace (￥10).

Independent travelers can rent the self-service audio guide device at the four gates of Temple of Heaven (Chinese, Cantonese, English, French, German, Spanish, Japanese, and Korean). You can also hire a personal tour guide in the park to get more detailed explanation.