Summer Palace is now a public park, but used to be the private garden for Royal families of Qing Dynasty to decamp during the hot summer days. It has assembled almost the best design, skill and classic features of traditional gardening architecture of ancient China.

Located on the western outskirts, Summer Place (颐和园) is one of the most popular attractions in Beijing. Just as its name implies, the palace is the place of emperors and his families of Qing Dynasty for summer retreat. Not only the landscape, but also the designs of Summer Palace are the best masterpieces among all the ancient gardens. Constructed around the Longevity Hill and Kunming Lake, Summer Palace is a vast complex of gardens, palaces, lakes and hills.

On December 2nd, 1998, UNESCO announced the Summer Palace as a World Heritage Site with the declaration “a masterpiece of Chinese landscape garden design”. The natural landscape of hills and open water is combined with artificial features such as pavilions, halls, palaces, temples and bridges to form a “harmonious ensemble of outstanding aesthetic value”.

Where is Summer Palace

The Summer Palace is usually covered in a full day’s visiting of Beijing tour package with other famous sites, such as Forbidden City, Temple of Heaven. The package includes convenient and private transfer, which is helpful and more enjoyable for you to focus on sightseeing.

If you prefer independent travel, you can take the subway Line 4 to the northern gate or eastern gate of Summer Palace. There are also many public buses available for you to transfer to or off the Summer Palace, such as 209, 330, 331, 332, 346, etc. 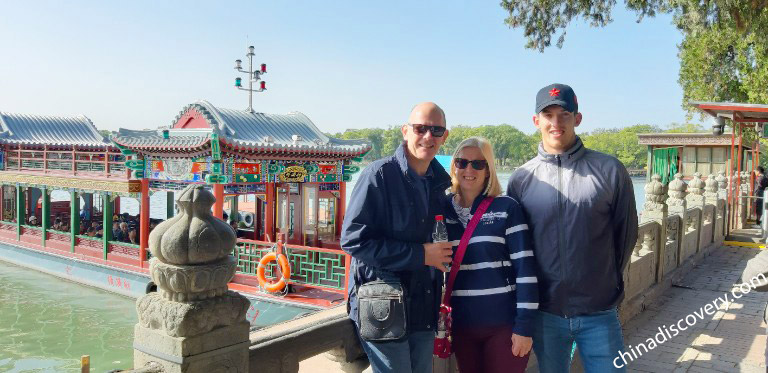 To irrigate royal gardens in western region outside the Forbidden City, the emperor Qianlong (乾隆) o ordered to expand the West Lake in 1750, and renamed the lake as Kunming Lake. The excavated earth from the expansion was moved to pile the Jar Hill which later was renamed as Longevity Hill (长寿山). In 1764, Qianlong gave the order again to construct a real garden around the Kunming Lake with the blueprint of the famous West Lake in Hangzhou. The garden, firstly named "Qingyiyuan" (清漪園; "Gardens of Clear Ripples""), was themed by an ancient Chinese mythology about three holy mountains in the East Sea. So the artisans built three islands in the lake to represent the three mountains - Nanhu Island, Tuancheng Island and Zaojiantang Island. Many constructions in the palace imitated the designs of other famous sites around China, including Yueyang Tower (岳阳楼) in Hunan, Yellow Crane Tower (黄鹤楼) in Hubei, shopping streets in Suzhou and Yangzhou.

In 1860, the end of the Second Opium War, allied army of British and French destructed large parts of Qingyiyuan Palace. During 1884~1895, the empress Dowager Cixi (慈溪太后) rebuilt the palace and gave the present Chinese name "Yiheyuan" (颐和园). In 1900, the army of the Eight-Nation Alliance invaded Beijing again, and destroyed the Summer Palace. Many artifacts stored in the palace were looted. Two years later, the palace was restored again under the order of empress Cixi. Since then, the Summer Palace has been preserved well, and served as a public park till today. 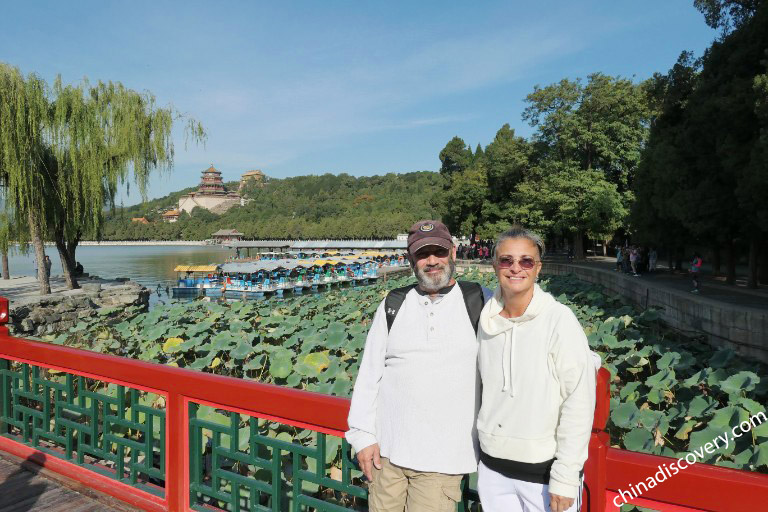 Attractions & Things to do in Summer Palace

The Summer Palace can functionally be divided into three zones. The first, represented by the solemn Renshou Palace, is the administrative zone where the empress Cixi and emperor Guangxu deal with the daily affairs and hold diplomatic activities. The second, represented by Leshou Palace, Yulan Palace and Yiyun Palace, is the living zone of Cixi, Guangxu and his princesses. The third zone is the largest as well as the most important part playing the role as entertaining, gardening and sightseeing, surrounded the Longevity Hill, including the highlighting sites Foxiang Pavilion, Paiyun Pavilion, 17-Arch Bridge, etc.

Attractions you can’t miss out

Renshou Palace - Hall of Benevolence and Longevity (仁寿殿): Situated at the left side of the entrance of eastern gate. It used to be the place where court sessions were held during the reign of Qianlong Emperor and Guangxu Emperor (光绪皇帝).

Leshou Palace - Hall of Joy and Longevity (乐寿堂). Facing the Kunming Lake, back against the Longevity Hill, Leshou Palace was the palace where empress Cixi lived.

Longevity Hill - this 58-meter high hill is the seat of some most important buildings of Summer Palace located on the front and back hills, including Paiyun Pavilion (排云殿), Foxiang Pavilion (佛香阁) and some Tibetan Buddhist temples.

Kunming Lake (昆明湖) - it is the body lake, and covers more than 3/4 the entire size of Summer Palace. Three small islands sit in the lake standing for three holy mountains in ancient mythology legend. Many buildings, such as bridge, dikes, imitated the features of those of West Lake in Hangzhou.

Foxiang Pavilion - this 41-meter high pavilion is a Buddhist temple for royal families to worship to the Buddha in Qing Dynasty. It has 8 stories, was propped up by 8 huge wooden pillars. The design and decoration inside is fabulous.

Long Corridor (长廊) - it lies at the southern foot of Longevity Hill facing the Kunming Lake. The corridor is regarded as the longest of its kind in the world with a total length of 728 meters. More than 14,000 paintings of famous places and known story from legends, folktales, novels, and so on, hang on the corridor.

Suzhou Street (苏州街) - the emperor Qianlong were keen on the prosperity of Jiangnan (Suzhou, Hangzhou, etc.), so he built the imitated shopping street resembling Shantang Street in Suzhou. Eunuch and maids in the royal palace acted as retailers when the emperors shop on the street.

17-Arch Bridge (十七孔桥) - 8 meters wide and 150 meters long, the bridge is the largest and longest bridge in the Summer Palace with 17 different types of arches. It incorporates features of the Precious Belt Bridge in Suzhou and the Lugou Bridge in Beijing.

Boating is very popular among travelers especially families with kids. The Kunming Lake covers vastly allowing you to enjoy the fascinating landscape with slow pace on the boat. But it is not available during winter because the lake usually is frozen. 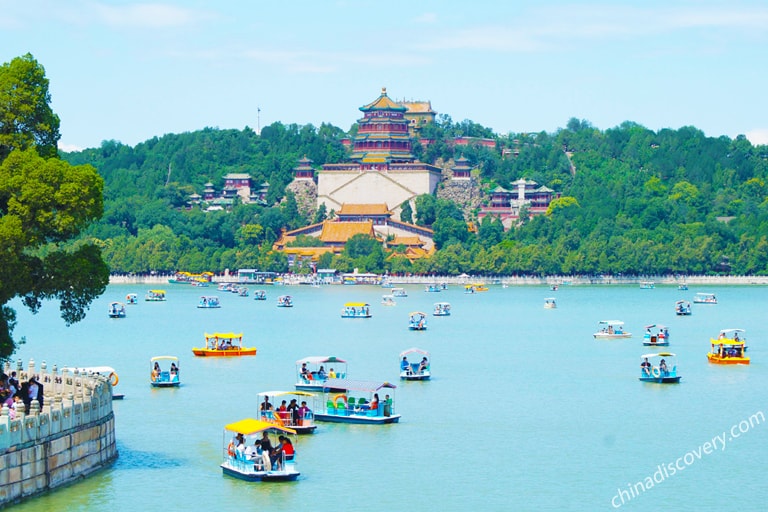 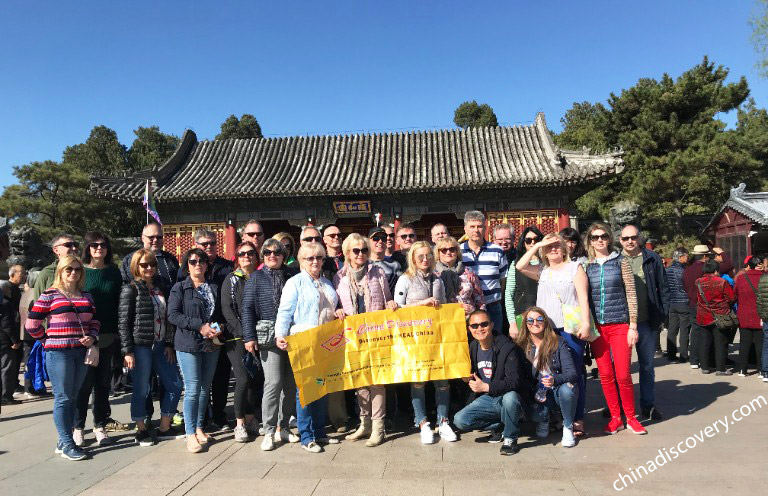 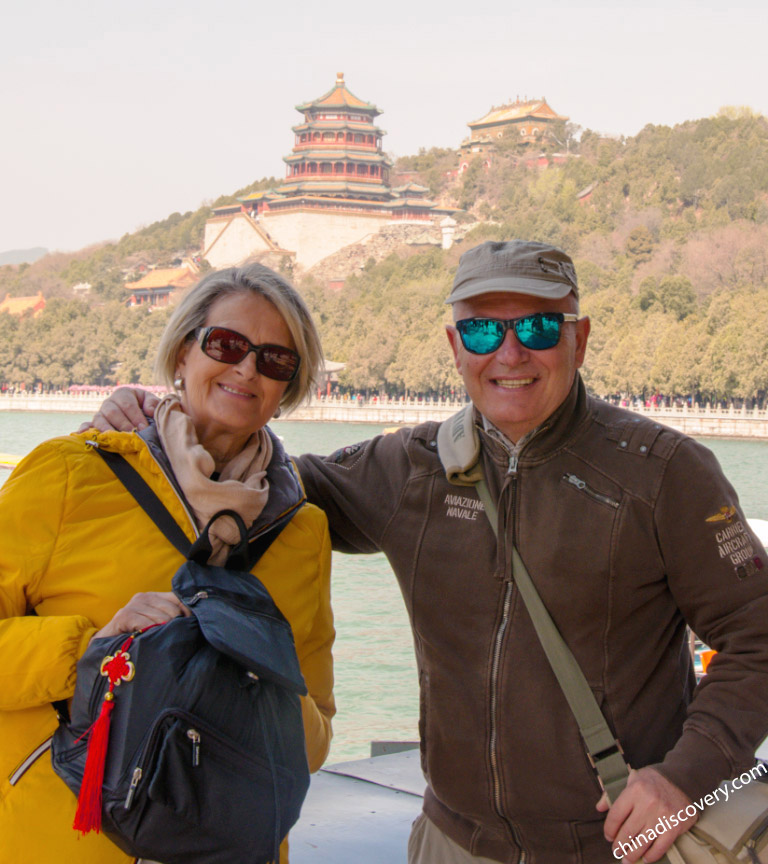 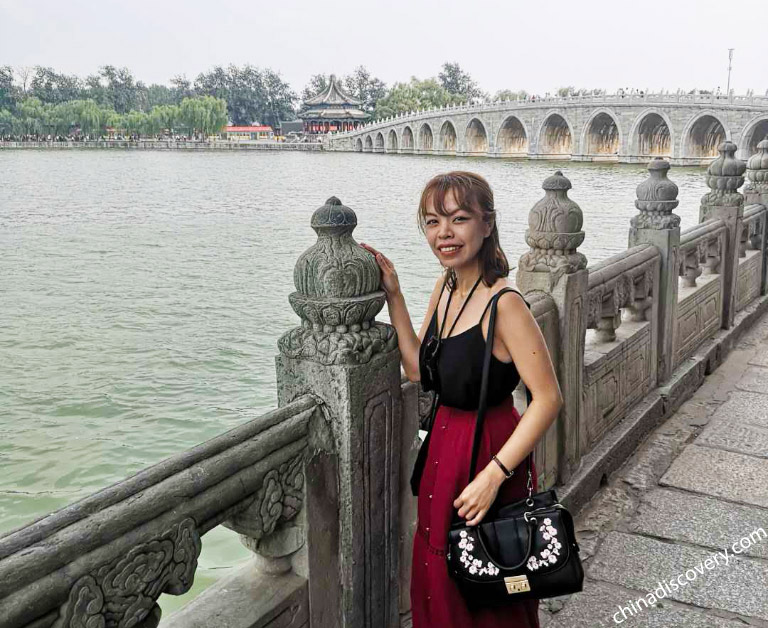 There are three entrances – Eastern Gate, Northern Gate and New Palace Gate. Travelers usually enter into the park from the Eastern Gate, then sightsee sites around, such as Renshou Palace, Wenchang Temple, etc. Then stroll around to the living zone of Royal families of Qing Empire. Don’t miss the Yulan Palace, Leshou Palace and Yiyun Palace. Then go to explore the famous Long Corridor. Next is to visit some important architecture on the Longevity Hill, such as Paiyun Pavilion, Foxiang Pavilion, etc. Lastly, take a boat to the Nanhu Island to see the 17-Arch Bridge, and exist from New Palace Gate. The entire sightseeing takes about 3 hours to go through.

If time allows, you can extend your visit to the western dam region which is featured in different type of bridges. The back hill of Longevity Hill also offers many interesting sites, such as the Suzhou Street, Xiequ Garden (Garden of Harmonious Pleasures), etc. If you are interested in Tibetan Buddhism, don’t miss the Four Great Regions which resembles the Samye Monastery in Tibet.

Nearby places to go

Summer Palace region is also famous for having two most famous universities in China – Tsinghua and Peking both of which have long history and outstanding reputation throughout China. Addition to the youth and vigour, Tsinghua and Peking Universities are also a pleasant place for exploring some ancient historical sites and peaceful nature. 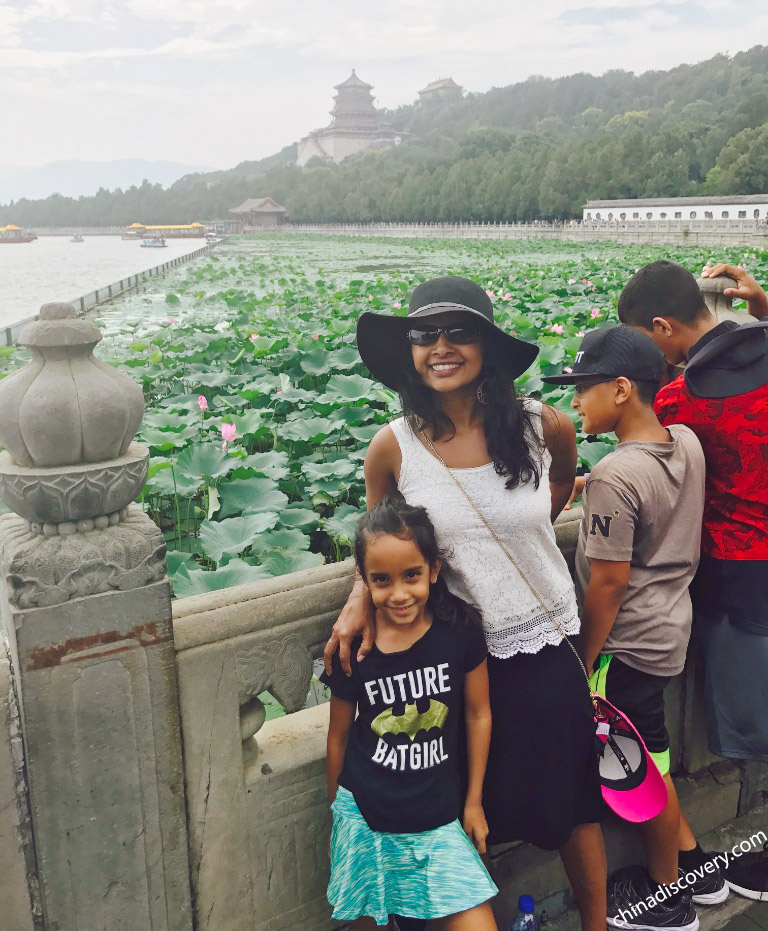 September and October are best months to visit Summer Palace. The autumn here is cool, neither too cold nor too hot. Spring is pleasant. Summer is usually hot and rainy, but a good season to enjoy the prosperous nature as well as the best time for boating on the Kunming Lake. If you want to see some spectacular views of Summer Palace, winter is the time when the snow covers the pavilions, towers, bridges – peaceful and pure.

There are also places for dinning and shopping, including 3 Chinese restaurants, several artwork shops. Barrier-free washroom and path are available.