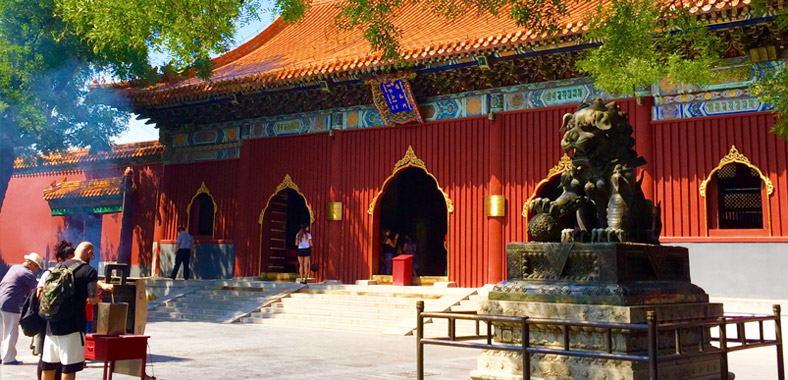 Lama Temple, also called Yonghe Temple or Yonghe Lamasery, is a national key Buddhist temple in the Han nationality area. The buildings are a combination of Han and Tibetan styles. Here you can learn more about Tibetan Buddhism while appreciating the excellent architectures, impressive Buddha statues, and scriptures in 4 languages.

Lama temple was built in A.D. 1694, the 33rd year during the reign of Emperor Kangxi in the Qing Dynasty (A.D 1644 - 1911). It was originally the residence of Prince Yong (the fourth son of Emperor Kangxi) and half of it was converted to a lamasery after Prince Yong ascended the throne. In A.D. 1735 when Emperor Yongzheng passed away, his coffin was placed in the temple. The next Emperor Qianlong ordered to change the turquoise tiles of the main halls in Lama Temple to yellow tiles. This has greatly enhanced its status because yellow is the color exclusive to emperors at that time. In A.D. 1744, Yonghe Temple was transformed into a formal Tibetan Buddhist temple and became the center of lama administration of the Qing government. It was open to the public in 1981, and in 1983, it was designated by the State Council of China as the national key Buddhist temple in the Han nationality area.

From the Forbidden City: about 5km, 25 minutes’ drive

From the Temple of Heaven: about 7km, 40 minutes’ drive

From the Summer Palace: about 19km, 45 minutes’ drive Lama Temple covers an area of 6.6 hectares with 661 rooms, of which 238 are Buddhist halls. Previous a prince residence and later a lama temple, it has a unique architectural style integrating the architectural art of the Han, Manchu and Mongolian nationalities. Lama Temple is basically a symmetrical complex facing south with five main halls and 7 courtyards in the middle axis and various side halls on both sides.

The five magnificent main halls with their side halls, Buddhist sculptures, stone carvings, and tablets in different languages are the highlights of Lama Temple. The halls below are introduced in a location order from south to north.

Gate Hall of Harmony and Peace used to be the entrance of Yonghe Temple, then later was reconstructed as Hall of Heavenly Kings (天王殿). A vivid bronze lion is guarding the gate. In the middle of the hall, you will see the statue of Maitreya with a smiling face sitting on a golden-lacquered carved with dragons. Behind the Maitreya is the armed Skanda, a protector of Buddhist monasteries. On the two sides of the hall, there are statues of Four Heavenly Kings (four gods in Buddhism that guard the north, west, east, and south of the world) stepping on monsters, showing their duty in suppressing evil spirits and protecting the world. In the north of Yonghe Gate Hall stands the Imperial Stele Pavilion. There is a stone tablet called The Discourse of Lama written by Emperor Qianlong and inscribed in Manchu, Han, Mongolian, and Tibetan languages. 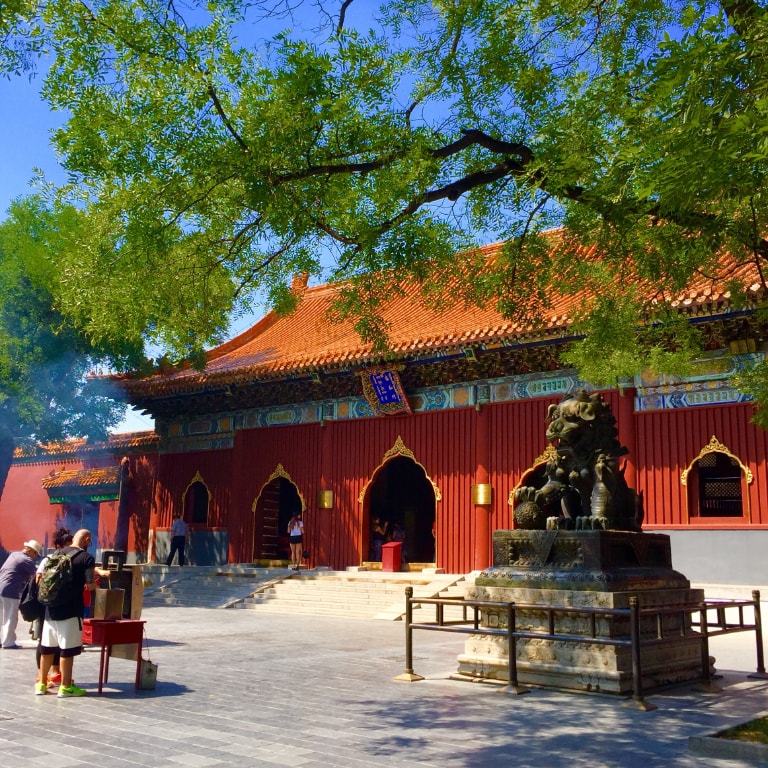 Gate Hall of Harmony and Peace

Hall of Harmony and Peace, formerly known as Yin'an Hall, used to be the place where Prince Yong met officials. After being converted to Lama Temple, it was equivalent to the Great Buddha's Hall of general monasteries. In the due north of the hall are 3 bronze Buddha as high as 2m. They are: Shakyamuni Buddha (the Buddha of the Present) in the middle, Dipamkara Buddha (the Buddha of the Past) on the left, and Maitreya Buddha (the Buddha of the future) on the right. These 3 Buddha indicate that Buddhism has a long history and life span from the ancient past to the infinite future. Avalokitesvara (the goddess of mercy) is worshipped in the northeast and a standing statue of Maitreya is in the northwest. In the courtyard in front of Yonghegong Hall, there is a 1.5m tall bronze Sumeru. It is a famous mountain in ancient Indian mythology and is said to be the center of the world. In Buddhism, Sumeru is the highest mountain and also where Sakyamuni preaches. When Prince Yong lived in Yonghe Temple, Hall of Everlasting Protection was his study and bedroom. Then it became a place to enshrine the late emperors of the Qing Dynasty. Yongyou Hall seems like consisting of five rooms looking from the outside, but actually each one of the five is combined with two rooms. So there are 10 rooms in total. In the center of the hall, there are three 2.35m tall sandalwood statues, which are the Buddha of Immeasurable Life (Amitabha) in the middle, Bhaisajya Guru (Medicine Buddha) on the left and Simhanada Buddha (a kind of powerful and noble Buddha) on the right. 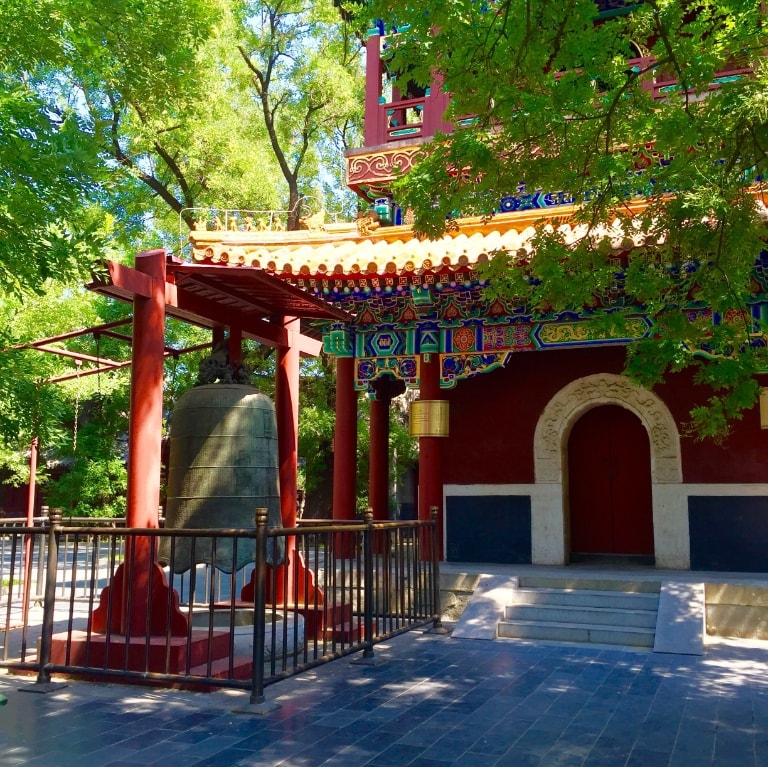 Hall of the Wheel of the Law (Falun Hall 法轮殿)

Hall of the Wheel of the Law is the quintessence of Han and Tibetan cultures. In the middle of the hall, a smiling 6.1-meter-high bronze Buddha sits on a huge lotus-shaped terrace. It is Tsongkhapa, the founder of the Yellow Hat (Gelug) sect of Tibetan Buddhism. Built in 1924, it took 200,000 silver kuping taels (worth about $5 million US Dollars in 2015) and two years to finish the work. Behind the statue is the Mountain of 500 Arhats, which is known as one of the three greatest woodcarvings in Lama Temple. It is nearly 5 meters high, 3.5 meters long and 30 centimeters thick. The whole mountain body is carved from rosewood, on which are 500 arhats made of gold, silver, copper, iron and tin in different postures. 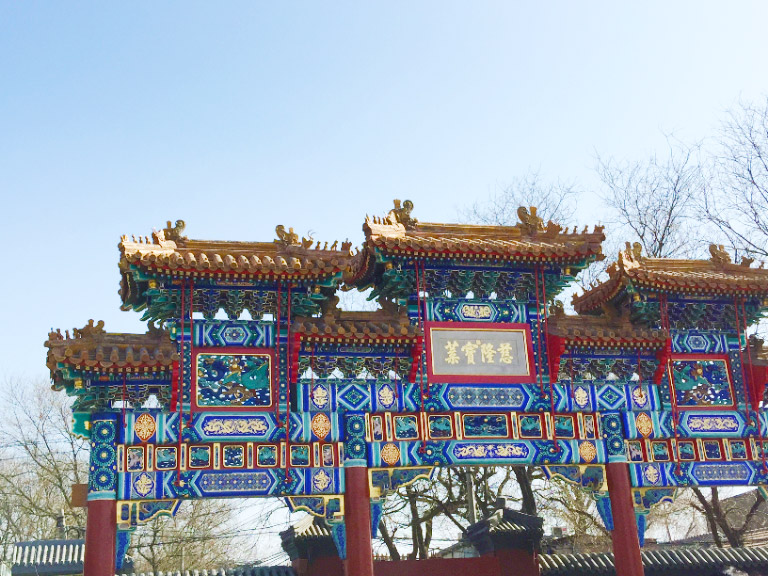 Glazed Pagoda on the Top of Falun Hall

Out of Falun Hall is the Pavilion of Ten Thousand Happiness, which is 25 meters high and has three storeies. Yongkang Pavilion and Yansui Pavilion are on its two sides connected by overhead corridors. In the hall, a giant Maitreya Buddha stands upright. It is carved by a whole 26m precious white sandalwood tree which is a tribute gift from the 7th Dalai Lama. The Buddha is 8 meters wide and 18 meters high (the other 8m of the tree is underground). It is said that Emperor Qianlong spent 80,000 silver kuping taels (worth about $2 million US Dollars in 2015) in carving the Buddha. It is also one of the three greatest woodcarvings in Lama Temple. The other one is in the Zhaofo Building in front of Wanfuge Pavilion. It is a Buddha niche made of stale-proof Nanmu (a kind of valuable Chinese wood) and carved with 99 lifelike dragons in an openwork technique.

Lama Temple remains a significant role in Tibetan Buddhism. Every year, there will be several Buddhist activities to celebrate the New Year, pay tribute to Buddha, and commemorate important figures such as Panchen Lama and Tsongkhapa. Among them, the Spring Festival Ceremony Dharma Assembly and Great Wish Invocation Dharma Assembly are the grandest.

In China, the first day of the first rural month (usually in late January or early February) marks the beginning of a new year. On this day in the Qing Dynasty, Lama Temple would send 36 monks to chant sutras at Zhongzheng Hall in the Forbidden City. Nowadays, at two o'clock in the morning, the monks will get up and get to the main hall to recite the Yamantaka Sutra and the Palden Lhamo Sutra until dawn. Then accompanied by the deep bell tone, they cross the yards to Falun Hall and chant sutras to pray for peace and prosperity of the country and people. On this day, Lama Temple will be teemed with people coming here to pay respect for Buddha. They will light the incense, walk along the temple, and pray before the Buddha piously.

Great Wish Invocation Dharma Assembly is an important festival of the Gelug sect (adhere to monastic disciplines). In A.D. 1409, the renowned Tsongkhapa held this Dharma Assembly at Jokhang Temple in Lhasa in memory of Sakyamuni. Since then, it was held every year and became a common practice. In the late years of the Qing Dynasty Kangxi Period (A.D. 1662 - 1722), this activity was introduced to Beijing and got support from the imperial court. As a royal monastery, the Lama Temple began to hold this assembly every year. The Great Wish Invocation Dharma Assembly lasts from the 23rd day of the first lunar month to the first day of the second lunar month, usually falls in some period from mid-February to mid-March. On the 29th day of the first lunar month and the last day of the festival, there will be religious dances to drive out the evil spirits. Religious Dances with Masks on

How to Get to Lama Temple

Located in the downtown area, Lama Temple is easily accessible both by subway and by bus.

Subway: Take Line 2 or Line 5 and get off at Yonghegong Station (雍和宫站)

As the route for public transportation is not fixed, please remember to double check before going there. If you want to save some time and avoid the transfer troubles, you can consider the tour packages provided by China Discovery. They will cover all the tickets, meals, accommodation, and transportation in your tour so that you can have a worry-free trip with a comfortable vehicle, skilled driver, and professional guide.>>Contact us now

There is still some distance between Lama Temple and other tourist sites like Tian’anmen Square, Forbidden City, Temple of Heaven, etc. If you still have some spare time after visiting the Lama Temple, the nearby Confucius Temple is a recommended place to go.

Confucius Temple is only 200m to the west of Lama Temple, so you can easily walk there. Confucius (551 – 479 B.C.) is considered as the greatest philosopher and educator in China’s history. As the name indicates, Confucius Temple is a place where Confucius was worshipped in the Yuan (A.D. 1271 - 1368), Ming (A.D. 1368 - 1644) and Qing Dynasties (A.D. 1644 - 1911). The temple covers an area of 22,000 square meters with the main buildings distributed along the central axis. Here you can learn a lot about this saint and his theories, and there is a group of stone tablets carved with 51,624 names, birthplaces and ranks of Jinshi (a title granted to the advanced scholars) in the three dynasties. How to Plan a Beijing Lama Temple Trip

It only needs about 2 hours or less to look around the Lama Temple and it can be easily reached. So you can arrange it either in the morning or in the afternoon according to your own schedule, for example, you can go there after you visit Tian’anmen Square and Forbidden City. Lama Temple is only one attraction in Beijing. To enrich your Beijing tour, you can add another day to the Summer Palace and the Temple of Heaven. If you have more days, you can go for an in-depth Great Wall hiking or photography tour, and explore more hidden attractions in Beijing city.

If you have any other questions or ideas, please feel free to contact us. We are specialized in customized tours according to your own interests, budgets, and traveling time. Our professional travel consultants are always ready to help! 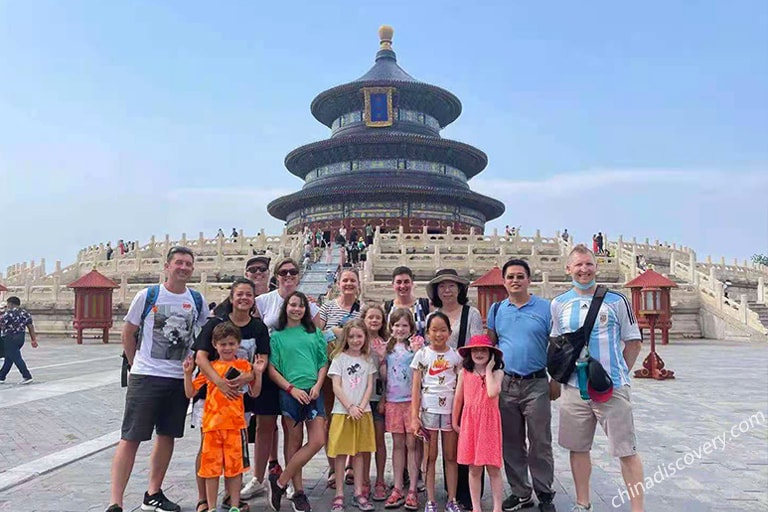 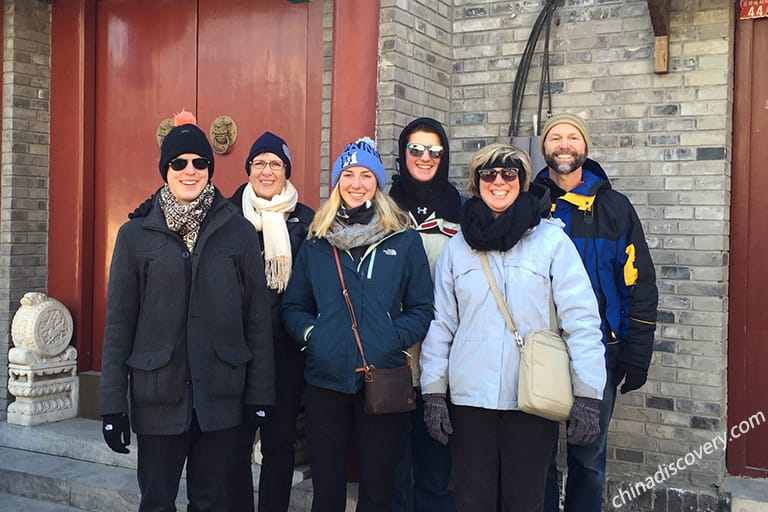 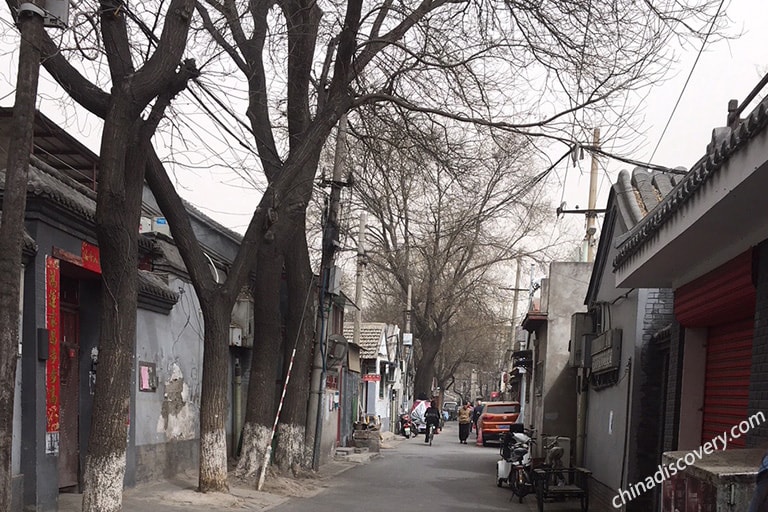