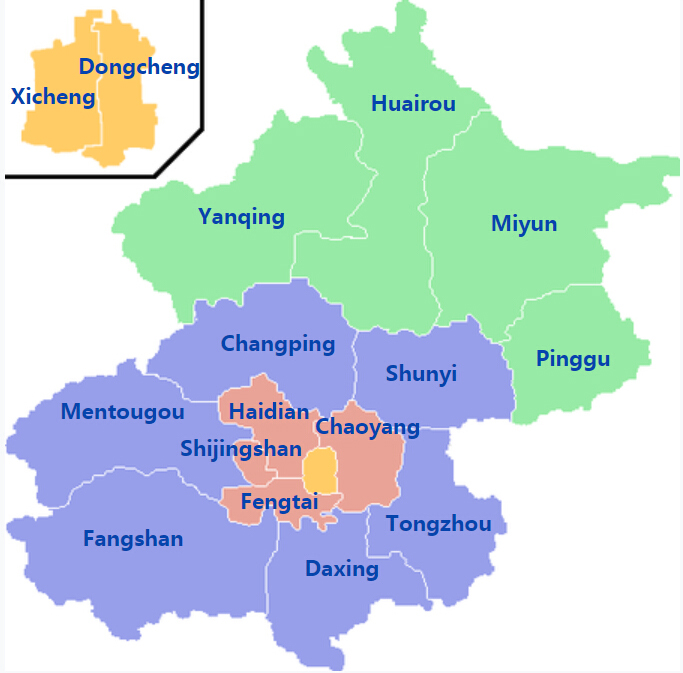 Beijing has 16 districts in total. The downtown area of Beijing includes Dongcheng, Xicheng, Chaoyang, Fengtai, Shijingshan, and Haidian. They are also where the main attractions locate. But the famous Great Wall lies in the remoter districts such as Changping, Huairou, Yanqing, and Miyun.

Xicheng District (50.7km²) is located in the west of the central area of Beijing, just next to Dongcheng District. It borders Haidian and Fengtai. There are many scenic spots in Xicheng District, such as Great Hall of the People, Jingshan Park, Beihai Park, Yuetan Park, Taoranting Park, Beijing Grand View Garden, etc. If you are interested in Chinese painting and calligraphy, you can spend some time at Liulichang Culture Street, an ancient street market lined with stores for books, paintings, and antiques. 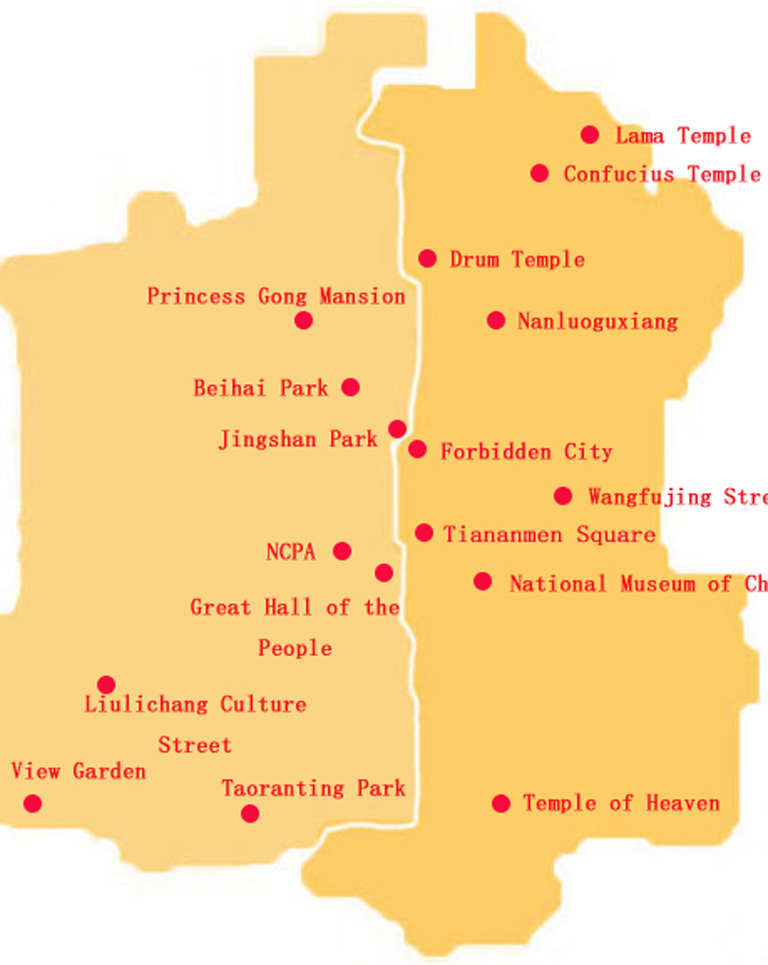 Chaoyang District lies in the east of Beijing. With an area of 470.8km², it is the largest district in downtown Beijing. Chaoyang District is probably the most suitable place to see a modern Beijing. The renowned CBD, a large number of foreign embassies, the fashion life landmark Sanlitun, and upscale residential quarters have made Chaoyang a hot spot for celebrities to get together. It is also an important industrial base (including textile, electronics, chemical, machinery manufacturing, automobile manufacturing and other industrial bases) in Beijing.

Shijingshan district is in the west part of Beijing, only 15km from Tiananmen Square. Though small in area (84.38km²), it is the district with the most abundant forest resources, the highest green coverage rate and the highest per capita public green space in Beijing. 23% of Shijingshan area is covered by mountains and the urban green coverage rate has reached 47.09%. Chinese people always have a special feeling for mountains because they believe they are closer to the immortal world. So Shijingshan has long been an important historical and cultural town in Western Beijing.

Haidian District is located in the west and northwest of Beijing urban area, covering an area of 430.8 square kilometers. Haidian District is a place many Chinese students yearn for because it is home to several top-ranking universities such as Peking University, Tsinghua University, Renmin University of China, Beijing Normal University, etc. You can have a tour around the universities to feel the vitality of the youth. There are also some famous places of interest like the Summer Palace, Old Summer Palace (Yuanming Yuan), and Fragrant Hills Park.

Changping District locates in the northwest of Beijing and spans a vast area of 1352km². It has a history of more than 2,000 years since being set up as a county in the Western Han Dynasty (202 B.C. – A.D. 8). The Ming Tombs and Juyongguan Great Wall in this district have been listed on the World Heritage List, and Xiaotangshan is a famous hot spring town. It will be quite refreshing to take a hot spring bath after hiking the Great Wall.

Yanqing District (1993.75km²) is located in the northwestern part of Beijing, adjacent to Huairou District in the East and Changping District in the south. It is known as the "Summer Capital" of Beijing because it is usually much cooler than Beijing downtown in summer. Badaling Great Wall in this district has attracted thousands of tourists there every year.

Miyun District is located in the northeastern part of Beijing, on the border of where the Yanshan Mountains and the North China Plain meet. It is a major gateway to Inner Mongolia and Northeast China, which shows the importance of Miyun in the history of China. So it is not surprising to know that there is another section of the Great Wall, Simatai Great Wall. If you are not in a hurry, you can spend a night at the nearby Gubei Water Town and appreciate the night scenery of the Great Wall.

Generally speak, 2 - 4 days are sufficient to explore the best highlights of Beijing. You can visit Tiananmen Square, now the largest city plaza in the world, Forbidden City, one of the world’s five most important palaces, and Summer Palace, the largest and best-preserved royal garden in China on the first day. Then spend another day hiking the famous Mutianyu Great Wall and having a walk at the Sacred Way on your way back to central Beijing. The third day is free for you to have some leisure time at the Temple of Heaven or hop on a rickshaw to experience the typical Beijing Hutongs.

If you have more days, you can go for an in-depth Great Wall hiking or photography tour, and explore more hidden attractions in the city, or even travel a little further to other cities in China such as Xi'an and Shanghai. If you have other ideas or questions about Beijing Tour, please feel free to contact us. We are also specialized in tailor-made tours that fit you best according to your own interests, requirement, traveling time, etc.