Currently, you can transfer from the airport to Forbidden City by China Discovery’s private transfer, taxi, subway or shuttle buses.

By Private Transfer of China Discovery – Most Recommended

We at China Discovery provide customized Beijing city tour packages which include tour services as well as airport pick up and other necessary transfers to your hotels and attractions. Whenever you arrive at the airport, our hospitable tour guide and driver will wait for you at the arrival hall, and welcome you with a sign having your names, then escort you to visit Forbidden City or other attractions immediately, or take you to check in your hotel before the tour with an air-conditioning and non-smoking vehicle. After the tour, they will also drop you off at the airport or train station on time. Traveling with our Beijing tour package, all you need to do is to focus on enjoy the fun of exploring Beijing, the greatest city full of cultural and historical wonders.

The Airport Express Train is the fastest way to get to central Beijing area. It is a one-way loop with stops at Terminal 3(3号航站楼), Terminal 2(2号航站楼), Sanyuanqiao Station (三元桥) and Dongzhimen Station(东直门), without station at Forbidden City or Tian’anmen Square. You can take the Express to get to Sanyuanqiao first, then change to subway Line 10, and change to subway Line 1 at Guomao Station. Get off Line 1 at Tian’anmen East Station, walk about 1km(10mins) northward, you will find the gate of Forbidden City. 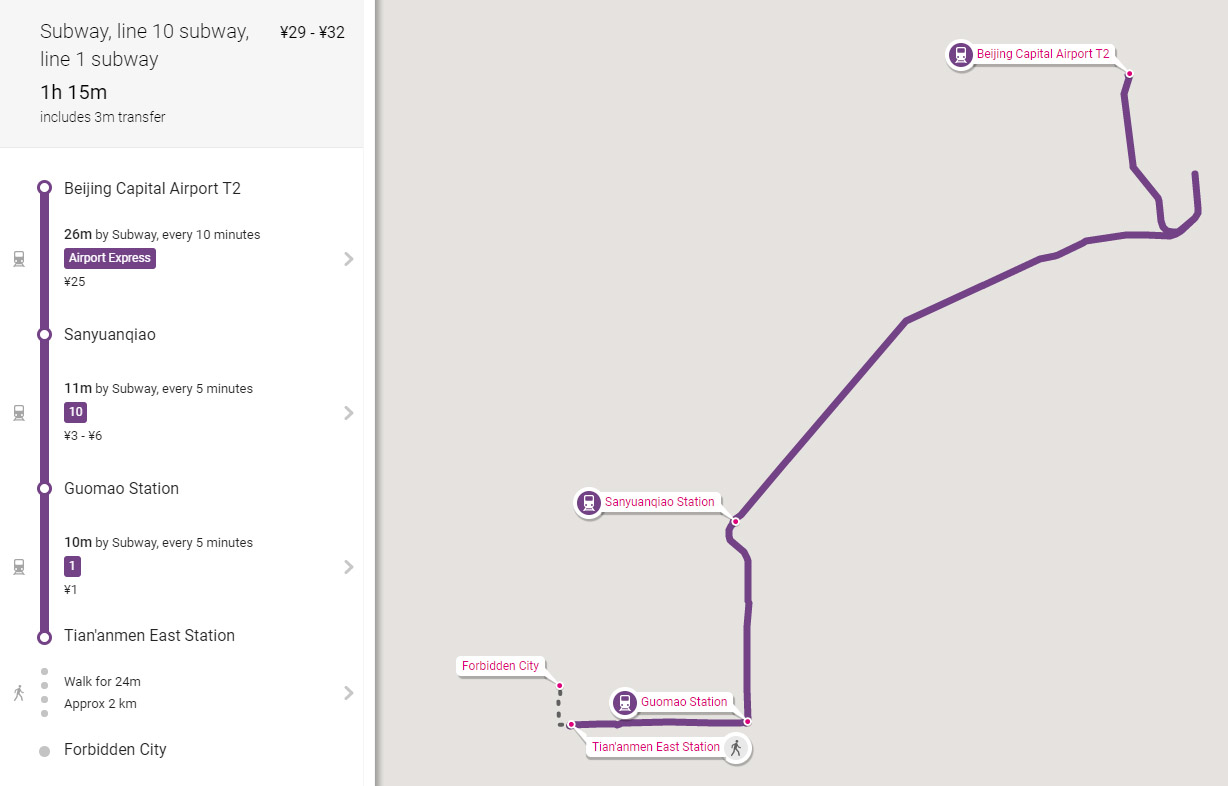 Transfer to Forbidden City from Beijing International Airport by Subway

There are over 20 shuttle bus lines connecting Beijing Capital International Airport, among which the Line 10 can transport you directly to Wanfujing where you only need to walk about 20mins to get to the gate of Forbidden City. It is the cheapest option, but taking longer time compared with subway and taxi. 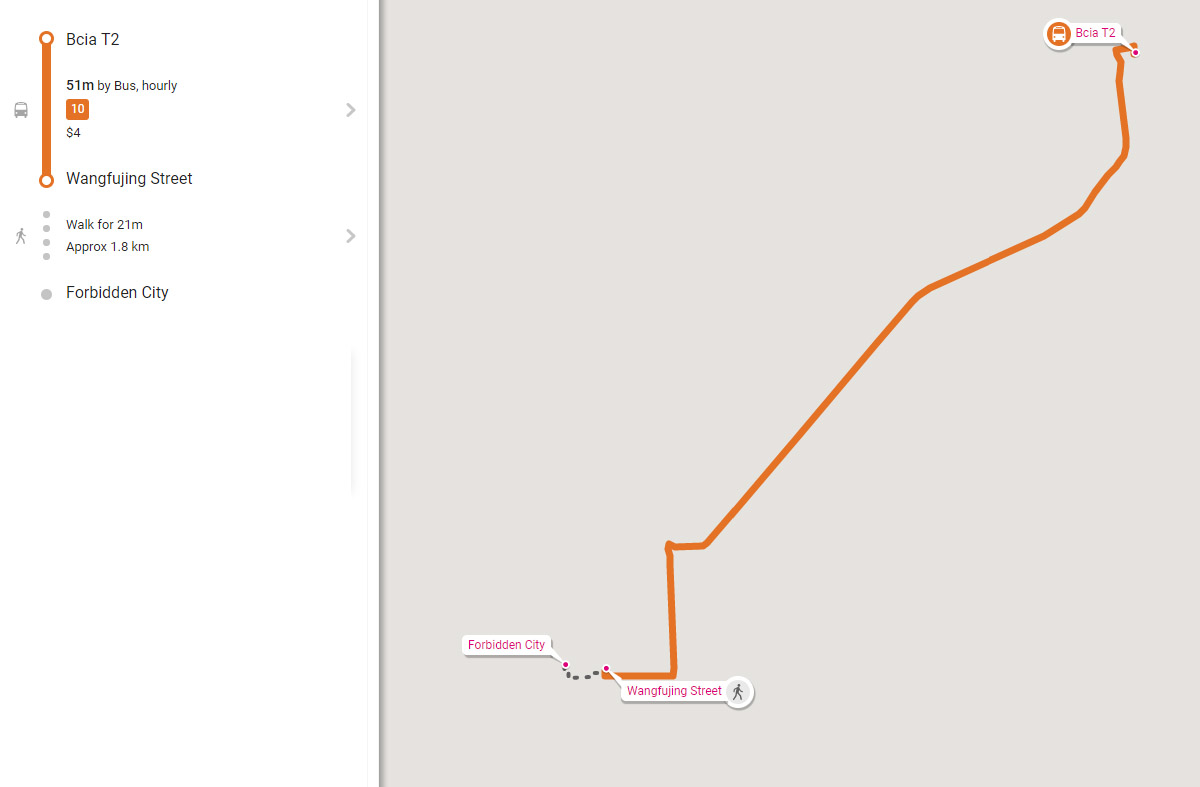 There are frequent shuttle buses (Beijing Railway Station Line) running from Beijing Daxing Airport to Beijing Railaway Station with a stop in Congwenmen Station (崇文门站), which is only 2 kilometers (15 minutes’ walk) to Tian’anmen Square. The whole trip takes around 1 hour 50 minutes.

Time Needed: about 1 hour and 50 minutes

If you want to save time, or want to get rid of hassle and crowds of catching the Express train or Taking a taxi is the most efficient way to get to Forbidden City. It takes usually about 20~30mins from Beijing Capital Airport or 1hr from Beijing Daxing Airport to get to Forbidden City when the traffics on the road are not heavy. But chances are big that you may come across traffic jams more or less, which may prolong the driving duration to over 1 hour sometimes. During some rush hours, you are advised to take subways instead of taxi, such as 8:00~9:30am, 11:30~13:00, 18:00~20:00.

Important Notice: Always take a legal taxi because there are many illegal private cars or limo driver may try to promote their transfer to you but cost you usually double the prices charged by the legit taxis. The license plates of all legal taxis in Beijing start with 京B. 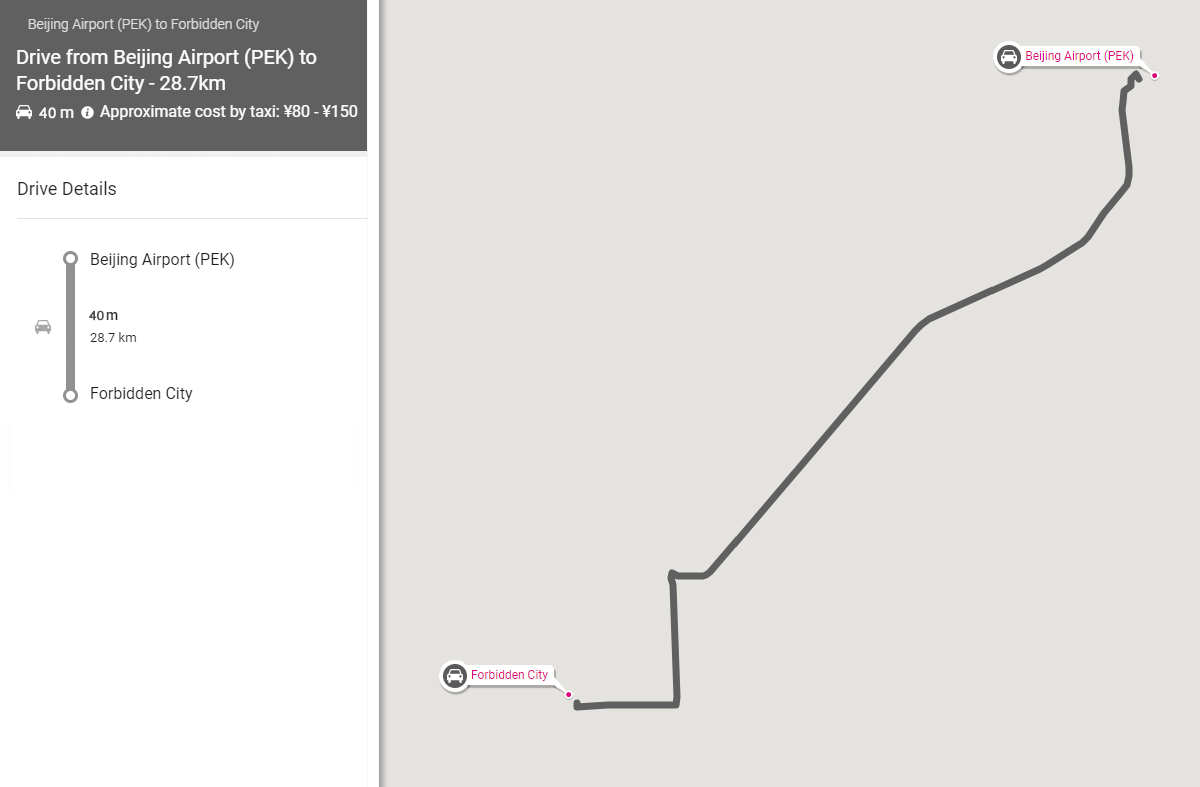 Transfer to Forbidden City from Beijing International Airport by Taxi