How to Transfer from Beijing Capital International Airport to Beijing Downtown 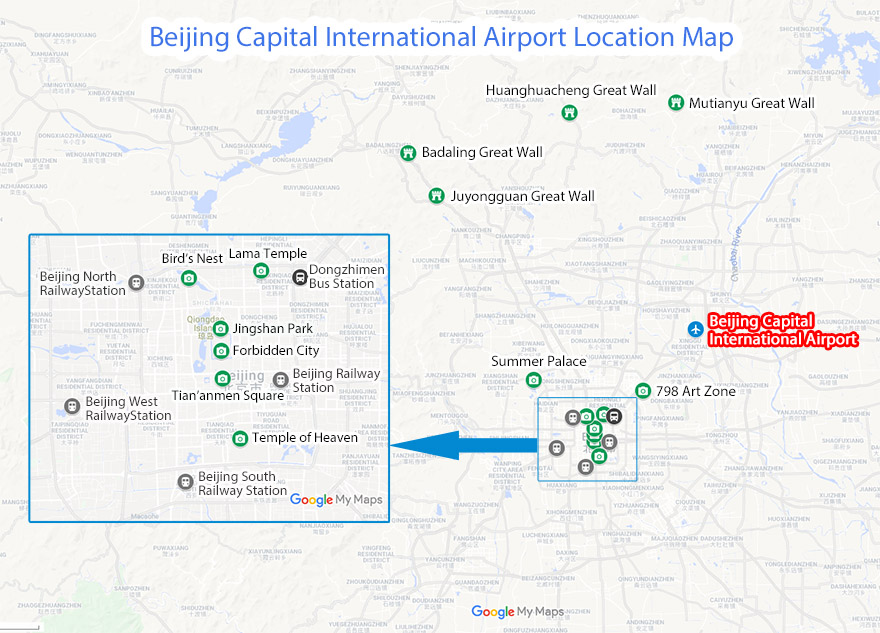 Where is Beijing Capital International Airport

Located in the northeast of Beijing, Beijing Capital Airport is 25.35 km away from Tiananmen Square, the center of Beijing, and it takes at least 100 CNY to the downtown by taxi. As one of the largest and busiest international airport in the world, it serves numerous international/regional flights which connect China with almost every continent of the world. There are also lots of domestic flights from/to every provincial capital city and other major cities in China. There are three Terminals, namely the Terminal 1, Terminal 2, and Terminal 3. Terminal 1 is for domestic flights of China Southern Airlines Company only; Terminal 2 serves for China Eastern Airlines, China Southern Airlines, Xiamen Airlines, Shenzhen Airlines, Hainan Airlines (international flights) foreign airlines of SkyTeam, etc.; and Terminal 3 is usually for China Air, Sichuan Airlines, Shanghai Airlines, Shenzhen Airlines, and foreign airlines of Star Alliance and One World Alliance…

By Private Transfer of China Discovery – Most Recommended

We at China Discovery provide confortable and efficient private airport pick up service for our clients usually a part of Beijing tour package. No matter when your flight arrives, and which terminal your flight lands, our friendly tour guide and driver will hold a sigh with your name and welcome you at the arrival hall with, then escort you to your hotel or any location you want to visit with an air-conditioning and non-smoking vehicle. They will also always put your safety and comfort at first during every minute of the transfer. After the tour, they will also drop you off at the airport on time.

The Airport Express Train is the fastest way to get to central Beijing area. It is a one-way loop with stops at Terminal 3(3号航站楼), Terminal 2(2号航站楼), Sanyuanqiao Station (三元桥) and Dongzhimen Station(东直门). Note the Terminal 1 is not linked to the Airport Express. Every 10 minutes, there is a train departing from T3, and arriving at T2 after 10mins, Sanyuanxiao after 25mins and Dongzhimen after 30mins. Pleaste notice that the Airport Express trains don’t run all day. The earliest train departs at 6:20 from T3 (B2 of Parking Garage No. 2), and 6:35 from T2(F2 of Parking Garage No. 3). The last train departs from T3 at 22:50, and 23:10 from T2. If you miss the last train, you can take shuttle bus or taxi to the downtown area of Beijing.

The one-way ticket is ¥25 (about $4). You can purchase paper ticket at the manual ticket office or the ticket vending machines by cash. You should keep the paper ticket all the time because it will be reclaimed when you exist from the train station. Currently there are more than 15 bus lines connecting Beijing Capital international Airport with the major districts of Beijing. Their departing hours are varied by routes, usually during 7am~12am. For middle night flight arrivals, you can take the Night Bus Express to Downtown which operates from 9pm to 4am, and departs once it has at least 6 passengers collected. The price of one-way tickets of Airport Shuttle Buses vary from ¥20 to ¥50.

Where to Take Shuttle Bus: If you want to save time, or want to get rid of hassle and crowds of catching the Express train or shuttle bus, or arrive Beijing during 11pm~6am, taking a taxi is the best option. It takes about 40~60 minutes to transfer from the airport to downtown area, but may takes more time when the traffics are heavy during rush hours (8am~9:30am; 6pm~9pm). The prices depends on the distance to your destination, usually around ¥80 – ¥150.

It’s very important to choose a legal taxi because there are many illegal private cars or limo driver may try to promote their transfer to you but cost you usually double the prices charged by the legit taxis. Luckily, it is not difficult to find the legal taxis because there is an area outside the arrival hall where the official taxis queue in lines. And the license plates of all legal taxis in Beijing start with 京B.

Where to Take Taxi: Taxis waiting for passengers at T3

How to Transfer to Important Attractions in Beijing