You are here: Home » Yangtze Cruises » Tribe of the Three Gorges

Tribe of the Three Gorges Facts

Tribe of the Three Gorges in Yichang is one of the most favorite shore excursion sites for Yangtze Cruise visitors. In this tourist area, the picturesque landscapes, primitive life style of local people, historical folk culture and traditions, and the perfect mixture of Ba and Chu culture present well here to give you a go to the wonderland.

Best Time: All year round, but March to September are the best for sightseeing

Overview of Tribe of the Three Gorges

Tribe of the Three Gorges, located in the area of the charming Xiling Gorge, on the “Two Dams, One Gorge” Tourist Line, has long been a popular scenic area, especially for the Yangtze River Cruise ship travellers from different countries and regions, also, it is the only one large scenic spot having not been influenced by the Three Gorges Dam project in Yichang. Within this 14 square kilometers wide place, reputed as a National AAAAA Tourist Attraction, multiple types of natural sceneries and primitive scenes of local people could be seen. Moreover, as a shining pearl on the Three Gorges golden tourist line, the Tribe of the Three Gorges will show you many mixed cultures, and make you immerse into a dreamland.

What to See at Tribe of the Three Gorges?

Once you enter the Tribe of the Three Gorges scenic area, you could easily be touched by the natural sightseeing and thick culture. You can savor from a lot of places there, like the Village on the Water, the Stream-like Tribe, the Mountain-top Tribe, the Stone Tablet, Shadow-play Stone, etc., besides, you can appreciate the wonderful performance of local wedding to know more of the cultural custom.

The Village on the Water

The Village on the Water is at the junction of Longjin Stream and the Yangtze River. Several old sailing boats docking in the wind, small fishing boats stop with the fishing nets stretching, emerald and clear stream water with the reflection of the forest and bridge, birds flying above the water… Everything is so dreamlike and fine to make you get lost in the picturesque place. Many generations of people at Three Gorges lived there by fishing, conflicting with the waves and wind on the water, companied with the fishing boat. Therefore, there forms the Village on the Water. Though, the living standard of locals has improved, the ancient custom has been well preserved, and you can stroll along the narrow and natural path to enjoy the beauty of wide, magnificence, and gentleness when you visit the Tribe of the Three Gorges. 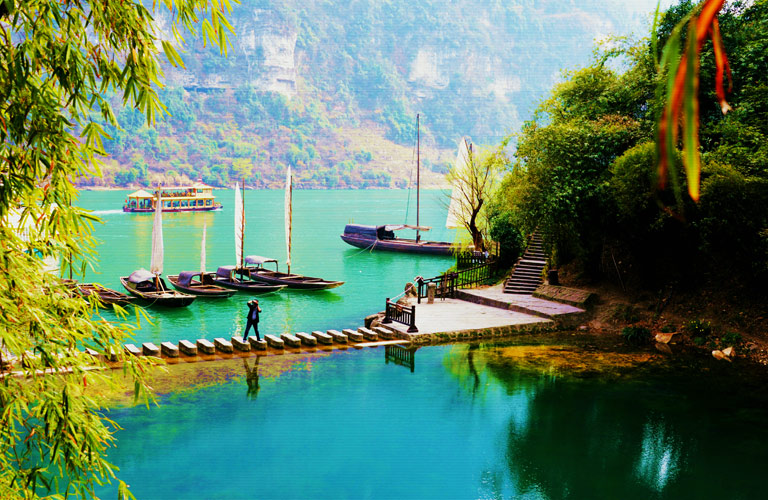 The Village on the Water

The Stream-side Tribe in Tribe of the Three Gorges leaning the hills and off the water is mysterious and fabulous like an idyllic poem and a landscape painting, with the verdant mountains, crystal clear water, beautiful sunshine coming through the plants, mists, and rains. The stilted houses are the living places of local residents, on which are hanging, like the red chili, corn, straw rain cape, and bamboo hats, etc. You would feel so amazing to surprisingly see so simple and original scene in the past time. Particularly, when there is smoke rising from the chimney of local houses, ducks playing in the stream in front of the house door, local maidens washing clothes with their rods. The sounds of those simple scenes in the village are so ear-pleasing to get to back to the pure life in the ancient China. 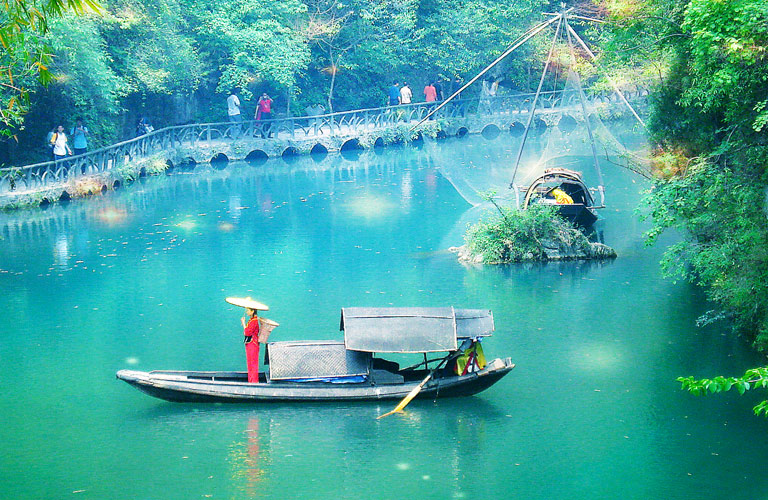 The Mountain-top Tribe locates at an area with precipitous landform, so people there build their house on the hill with wooden structures, and their house is called the “Ganlan (stilt) Style Architecture” by modern architects. Since the landform is very steep and the houses must be flat and stable with the support of pillars or constructions of wall, they are called stilted houses. Usually the houses have 2 to 3 floor, with the 1st floor for storage or feeding domestic animals, and the 2nd and 3rd ones being the living place for hosts. Walking to a residence of local people, you may feel it so primitive and pure. What’s more interesting is that you could walk from one door to another room and after some stairs, you would enter another room, which is like having fun with the hide-and-seek. Since the complicated structure for new people, they may easily enter the stilted houses, but feel difficult finding the exit. Moreover, the covers of the house roofs are made from various materials and with different says, however, people there would say it with good words and opinions because they have optimistic attitude and love for the life. Visiting this place in Tribe of the Three Gorges, your time will be filled with good mood. 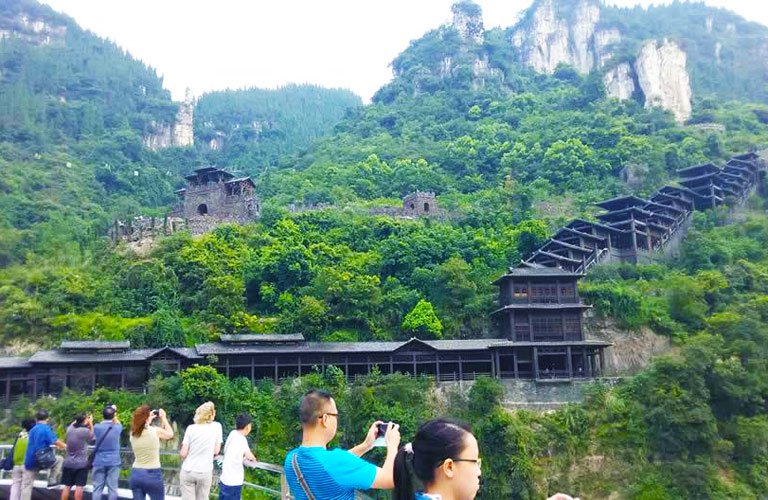 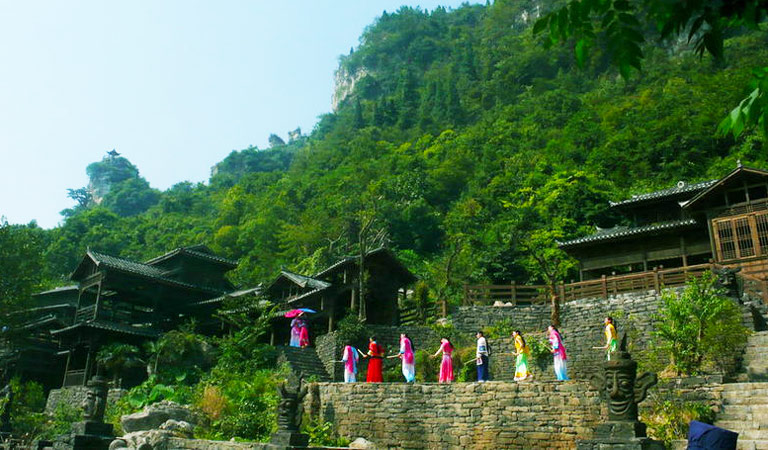 The Stone Tablet is 32 meters high, with the top of 12 meters wide, bottom of 13 meter wide and weighing about 4,300 tons. This pure white stone is vertical like a blade. Also, the surface of the stone is so smooth like having been elaborately made into a tablet by people, forming a strange geological wonder. There is a folk tale says that this stone tablet is the holy tablet coming from the Jade Emperor who is the Supreme Deity of Taoism, with duty to protect and bless the people on earth. Locals say it really works for praying and so it becomes the holy place for people to worship for good fortune, wealth and other wishes. 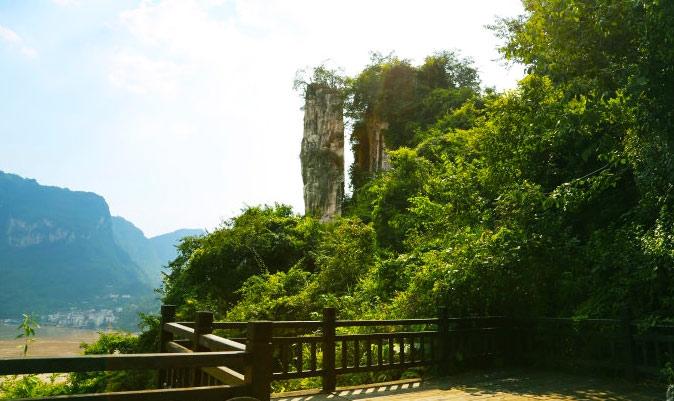 The Shadow-play Stones at Tribe of the Three Gorges actually is consisted with 4 rocks, which seem extremely the four characters in the famous “Journey to the West”. Every time when it comes to the sun set, the four rocks look like those figures performing the shadow play. Therefore, the rocks have the name of Shadow-play Stones. And among all the four rocks, the most well-known is the Monk Sha Rock that is reputed as the “No.1 Stone on the Yangtze River”. Appearing in the shape of a mushroom, this stone weighs over 100 tons with only a supporting point of only more than 200 square centimeters, in another word, there is 0.5 ton weight on every one square centimeter averagely. You would visit to see why this so “thin” rock can stand there for tens of thousands of years without any change so that it could be called a “wonder of the world”. 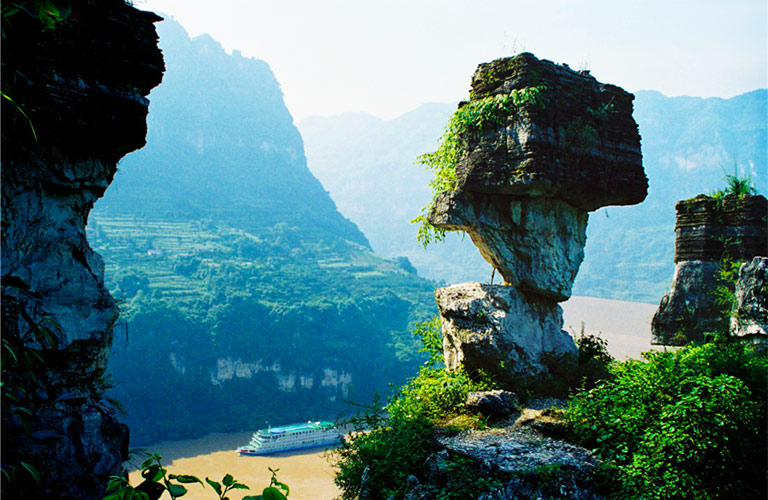 The wedding custom performance is one of the must-sees if you visit Tribe of the Three Gorges. This special custom of local Tujia ethnic group represents their featured value and opinion about wedding and marriage. About half to one month before the wedding ceremony, the girl begins to cry for the marriage, which not only shows her unwilling to live far away from her birth family, but also expresses her delightfulness for the upcoming marriage with her loved boy. In this performance, the bridegroom comes to the bride’s home to escort her back to the wedding, with the jubilant composition of the drums and gongs. Everything is well prepared with red and other lucky colors to celebrate this festival day. Thus, you could go to the Marriage House at Longjin Stream to watch the joyous wedding performance and know more about the local custom and be influenced by the humorous and happy atmosphere. 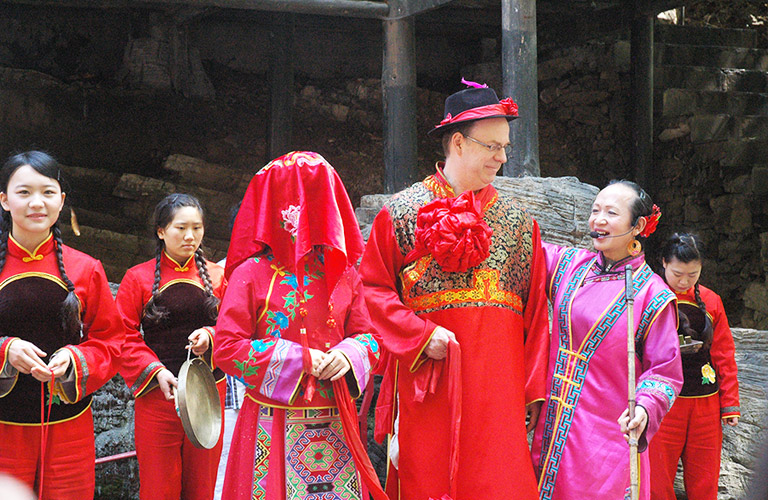 Besides, there are many other worth-seeing attractions at Tribe of the Three Gorges Scenic Area, like the Mingyue Cave, Shadow-play Cave, Frog Spring, Stone Tablet Anti-Japanese-war Memorial Hall, and so forth. If you have enough time, you can visit those places to enjoy more natural sceneries, savor more interesting culture and know other stories happened there in the past times.

Location & Transportation to Tribe of the Three Gorges

Tribe of the Three Gorges is situated in the northwest side of Yichang City in Hubei Province.

Usually, it is arranged as an optional shore excursion site for Yangtze River cruise travellers, so cruise visitors can travel to this charming place during your cruising time. Since local guide would lead you from the ship to the scenic area, you do not have to worry about how to get there, and you would have more time and energy to focus on the highlights.

For other visitors, you could arrive at the Tribe of the Three Gorges by various means of transportation from many places in Yichang.

If you arrive in Yichang by air, you could reach the scenic area by a taxi for about 1.5 hours for about 64km long distance.

From Yichang Railway Statio, the most convenient way is to take a taxi for about 1 hour and 10 minutes. Besides, you could also take the bus No.10-1 or others to get there for about 2 hours.

If you get there from Yichang East Railway Station, you could take a taxi for about 1 hour and 15 minutes.

Useful Tips for Traveling Tribe of the Three Gorges

Wedding performance: in the wedding custom performance, sometimes the bridegroom may toast to visitors with the local corn wine, if you do not drink, you could refuse politely.