Sitting in the north side of Yangtze River, Shibaozhai Pagoda is considered as one of the most exceptional examples in the world. This vermilion 12 storey pagoda was built into the side of a cliff face, rising almost 100 feet high. Climb on the top and there is a great view of the town and river for you.

Located at the north river bank of Yangtze River in Zhong County, 32km from Zhong County and 190km from Chongqing City, Shibaozhai (石宝寨) is actually a rocky and craggy hill on the river side. It is a “National AAAA Tourist Attraction” and has been praised as one of the “Top 7 Wonders in China” and the “World 8 Strange Constructions” by the US Discovery Channel. This rock hill is about 200 meters tall, and according to the legend, this huge rock was a colorful stone left by Goddess Nvwa when she repaired the sky, thus it's called Shibao (means precious stone). While in Ming Dynasty, Tan Hong, the leader of peasant uprising, had taken this place as its fortress, thus this place was named as Shibaozhai, literally means Precious Stone Fortress in Chinese. Shibaozhai is a tourism resort which combines mountain scene, water scene and ancient architecture into one. With so many great and special features, Shaibaozhai Pagoda is reputed as the “Bright Pearl on Yangtze River”. 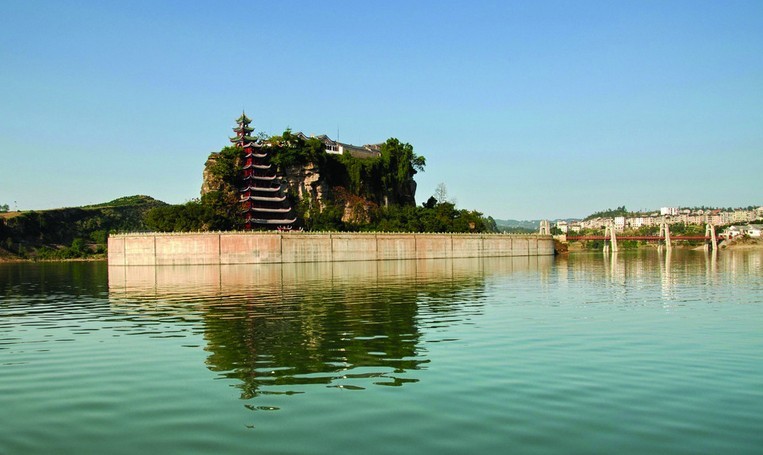 Shibaozhai Pagoda is a wooden pagoda built along the cliff face of Shibaozhai. First built in Qing Dynasty by the local craftsmen, Shibaozhai Pagoda is the existing largest wooden architecture with crossing bracket type. The pagoda is 12 layers in total, with a height of 56 meters, and all of them were made of wooden, without using any single nail in the construction. The pagoda originally had only nine layers, which indicates the nine levels of the heaven. The top three layers were constructed in 1956 when repairing the pagoda. The overall layout of Shibaozhai Pagoda was designed according to the topography of the cliff, while parts of the pagoda were processed flexibly. No matter the arrangement of the axis, the position of the front door, the design of the stairway in the pagoda or the appearance of the pagoda are designed imaginatively. It's a pearl among the southern architectures in China.

Flying Pagoda: to get on the top of Shibaozhai, tourists need to go through Shibaozhai Pagoda, which was built along the cliff face. Inside of the pagoda, each floor is connected by zigzag wooden staircase, and in the stone wall of each layer, there are stone carvings, stone paintings and scriptures left from various dynasties. When you climb up to every layer of the pagoda, you could have a great view of Yangtze River.

Ancient Temple on the Top of Shibaozhai: on the top of Shibaozhai is an ancient temple called Ganyu Palace. With an altitude of 230m, the temple was constructed in early Qing Dynasty. There are colorful life size figures in the temple. Nowadays, the temple has no monks anymore, and there are only craft store here.

In the rear hall of Shibaozhai Pagoda, you could see the Rice Flowing Cave (or Hole)(流米洞) with a statue of a monk digging a stone hole in there. It is legendarily said that rice flows out from the stone cave, but the amount is only enough for the monks there. And later, a greedy monk dug the cave for his desire for more rice. However, it turned out with no rice flowing out from that cave any longer. That legendary tells that a contented mind is a perpetual feast in the Buddhist culture.

The Duck Cave (鸭子洞) also has an interesting legend. It goes that when spring turns into summer, if you drop a live duck into the hole there, after about 15 seconds, it would float down in the Yangtze River. And in the past, monks there made pipes of bamboo to get their drinking water from this hole.

Besides the above recommendations, there are also many other nice relics about the culture and history of Shibaozhai Pagoda and the whole China. You could see a lot of different statues of the legendary figures in colorful costumes and vivid facial expressions, a series of outstanding calligraphies and carvings in the walls and cliffs, ancient battery, old and difficult but worth-trying ways to the top of the pagoda, and encounter with many interesting stories and legends about the Buddhism, Taoism, and other values in ancient China. 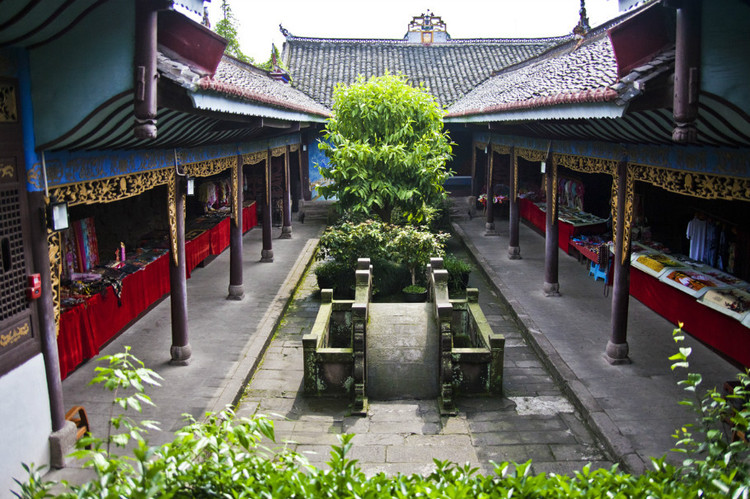 Temple on the Top of Shibaozhai 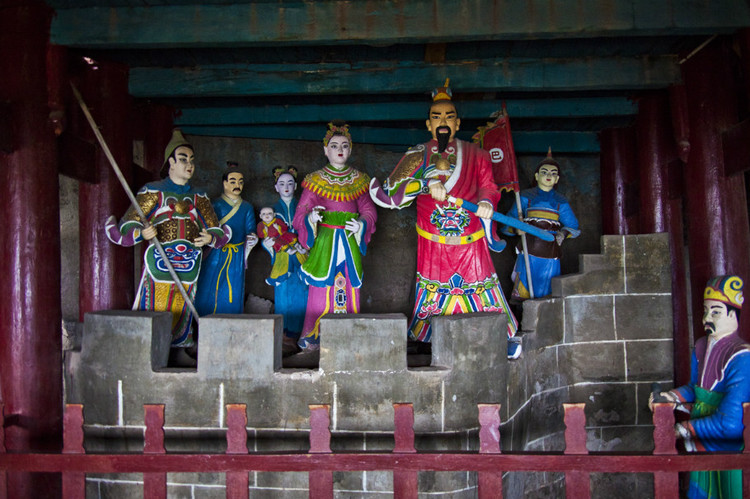 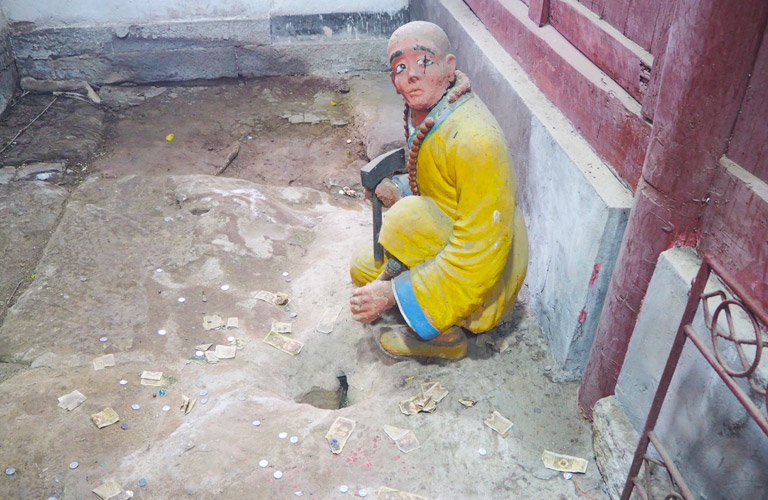 The Monk Statue in Liumi Cave 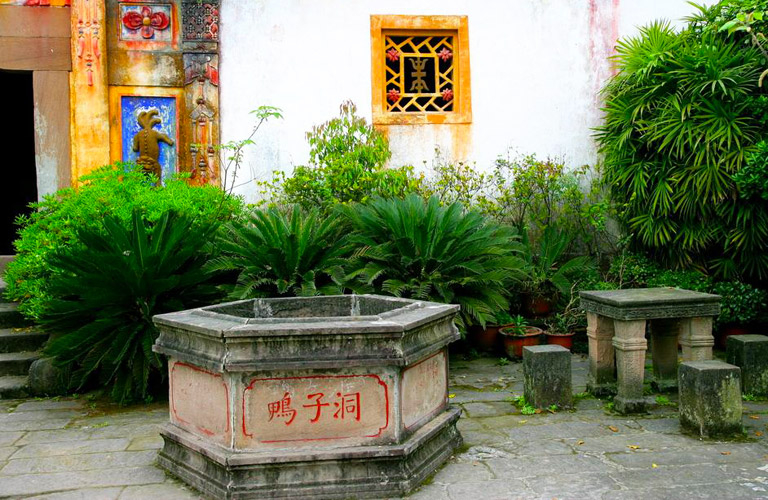 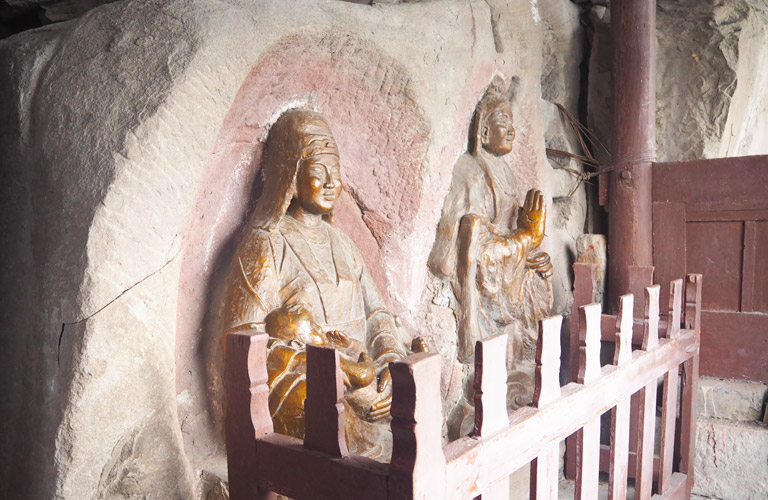 After the establishment of Three Gorges Dam, the water level of the upstream of Yangtze River had been risen a lot, and the water reached to the front door of Shibaozhai Pagoda, forming a lake of about 20 acres around Shibaozhai. To protect the Shibaozhai Pagoda from the water, from 2005, the government started the protection project, which built an 800m long and 50m high dyke around the pagoda, with 30m under the ground and 20m above the ground. On the top of the dyke is a footpath. Shibaozhai was opened to public again in 2009 after the finish of its protection project. Surrounded by a circle of giant dyke, the newly Shibaozhai is just like a giant bonsai in Yangtze River.

Shibaozhai Pagoda is one of the shore excursions of Yangtze River cruise ships, so tourists who take the cruise ship will visit it during the cruise. This is the best way to visit it, because you don't need to waste time on the road.

To reach this pagoda, tourists will have to walk over a strung bridge, which is very rickety and bounces a lot, so make sure to take your time and be careful.

To climb on the 12-storey pagoda, tourists will walk up for quite a few steps to the top of the pagoda. The wooden steps are a little bit steep, so be careful in the climbing. The climb is not easy, but it's well worth it, because the view from the top is amazing. However, for tourists with weak legs, it's not recommended to climb on the top, just walking around the pagoda to appreciate it is also great. 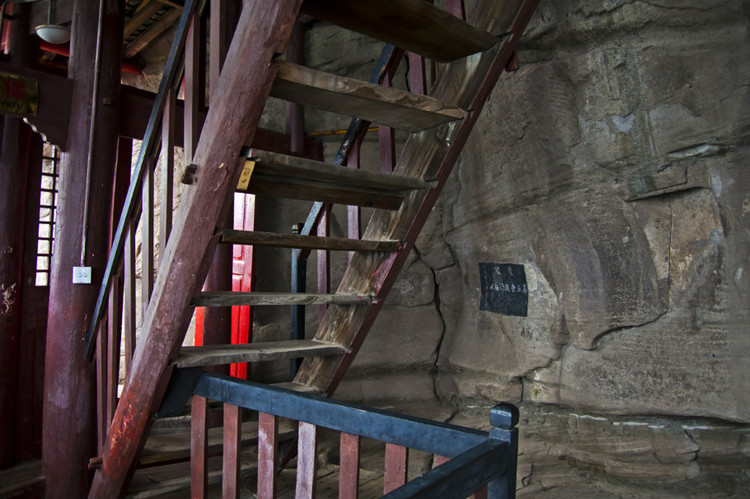