You are here: Home » About Us » Travel Stories » An Interesting Visit to Mogao Grottoes

The Meaning of Travel - 1000 Years of Buddhist Art Visit

"I always travel alone when visiting other countries, planning the itinerary, the hotels, train and metro connections etc, However, In case of my tour of China, considering the language problems, that I am a 70 year old man with weak eye sight, and that I would be travelling alone, I decided on a private tour. I chose China Discovery the Chengdu based travel agency through the Internet. Right from the initial show of interest, one of their travel consultants, Stephanie Kuang interacted with me throughout. I was truly impressed by her quick responses, professionalism and guidance. With her I finalised a 13 day itinerary covering Beijing, Lanzhou, Dunhuang, Xi’an, Guilin, Chonqqing, a Cruise from Chonqqing to Yichang on board the Victoria Anna, a short sightseeing at Yichang and lastly Shanghai. All the five domestic flights were arranged by her. I had originally planned to fly to Dunhuang from Beijing but at the time of my visit, the airport at Dunhuang was closed for renovation. Stephanie quickly worked out an alternative involving train journey from Lanzhou to Dunhuang and back."

The modern Digital Exhibition Centre is where the tourists gather before visiting the caves. The visitors are shown two movies in the Centre. While waiting for the movies to start I wandered around the place which had a nice gift shop. I liked some of the items but Donna advised that there were better items near the cave and so I did not buy anything. It turned out to be a great mistake. The first movie shows the history of Dunhuang and the caves. It was in Chinese with English subtitles. We then went to the next hall for a 360 degree view of the caves. It was marvellous depicting the cave interiors in bright colour. This is extremely helpful as no photos are allowed inside the caves. 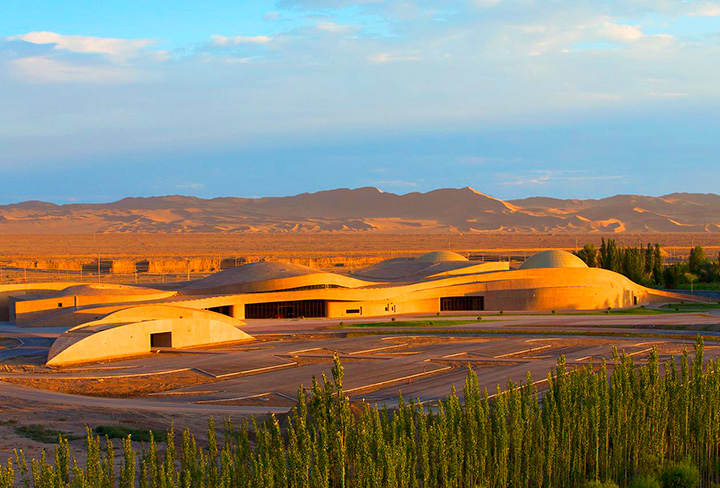 
Way to the Caves

After the show we were taken by coaches to the site. A short walk from the parking lot brought us to the cave entrance. On the way we passed the Dachuan River that was dry during our visit but flash floods do occur.

On the way to the caves we passed a courtyard containing a number of stupas. Next we came to a number of shops selling various items. However, these shops did not have the type of souvenirs I had seen in the shop in the Digital Centre. I came across a shop selling Durian ice cream.

Passing the shops we came to the art gallery where artists were displaying their paintings. Then we went to the entrance of the caves. The visitors were divided into different groups depending on the language spoken by them. I was the only one who spoke English and had to wait a while an English speaking lady guide came over and took me to the caves.

The UNESCO World Heritage site, the Mogao Caves were carved into the cliffs above the Dachuan River in the Gobi desert. The cave paintings and statues which started in the 4th Century span 1000 years of Buddhist Art. It was also the largest depository of manuscripts, scrolls and paintings before these were dispersed across various museums around the world. 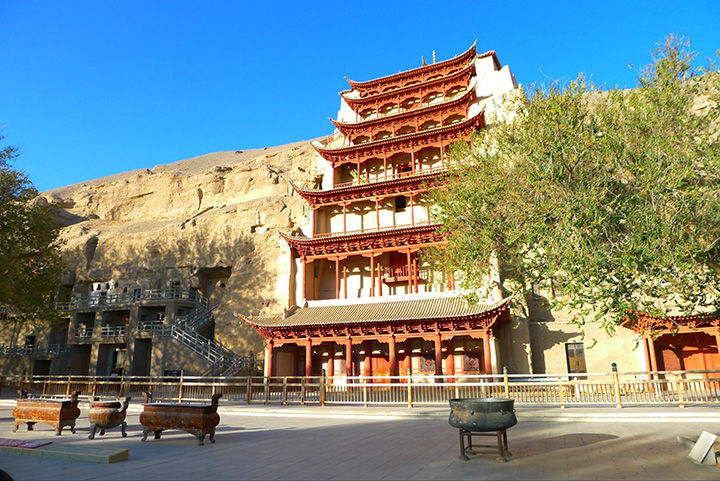 
There are 492 caves of which 8-10 are shown by rotation to the public. It spans 10 dynasties and is reflected in the different styles of paintings and sculptures.

Buddhism was brought to China from India through the Southern Silk Road by the monks, scholars and travellers. The Silk Road was not only a road for trade and commerce but also the road for flow of thoughts, ideas, art and cultures. The first caves were curved during the Wei Dynasty and the influence of the Indian Graeco Gandhara style of sculpture and painting can be seen in these early caves - the men have long nose and the women large breasts. A distinctive Chinese style emerged around the 6th century under the North Wei period Under the short Sui period Buddhism took a strong hold and the art style also changed in the Mogao caves. The Song and the North Zhao periods also left their mark. However it was under the great Tang Dynasty which brought stability to the country and poetry and arts flourished, that the art of the Mogao caves reached its zenith as can be seen in the wonderful Cave 45. Under the Mongolian Yuan dynasty which lasted for about 100 years the paintings came under the Tibetan influence.

The caves have several levels with each level having a balcony running the full length. All visitors must be accompanied by an authorised guide. No photos are allowed inside the caves and so my review is based on my recollections of some of the memorable caves that I visited. The Lady guide led me through a flight of stairs to the upper balcony and all the caves open up to the balconies.

We started with Cave 130 containing a giant Buddha statue attributed to the High Tang Period. It is a statue of Maitreya regarded as the future Buddha in Buddhist eschatology. Apart from the giant Buddha the cave is noted for its well preserved murals. 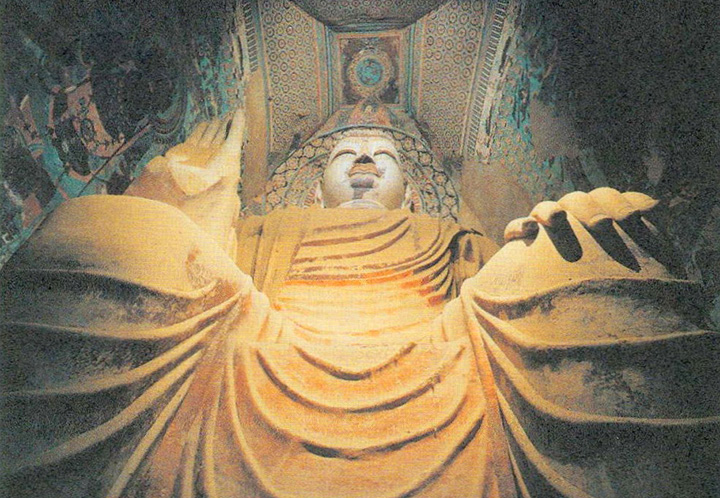 
Next we went to Cave 148 with the beautiful figure of reclining Buddha and is a great example of art of the High Tang Period. The cave is in the shape of a coffin as befits the depiction of Nirvana of Buddha. The thousand Buddha motif, which is common to many of the Mogao caves that I visited, is painted on the ceiling and still retain their original colour. The Buddha is lying on his right with the right arm under his head. While coming out of a cave, I noticed the remnants of a lovely mural on the outside ceiling of a cave.

After seeing some more caves, we passed Cave 96 popularly known as the Nine Storey Building and is Mogao’s landmark. It was built for the protection of the colossal Buddha statue inside the cave. The statue is that of Maitreya and is now the world’s second largest Buddha Statue. It was actually the fourth largest statue but after the wanton destruction of the Bamiyan Buddhas in Afghanistan, it is now the second largest. Notable is Cave 45 depicting Sakyamuni surrounded by his disciples among them Ananda and Kasyapa both wearing luxurious robes reflecting the splendid time of the great Tang Empire. Undoubtedly this is one of the finest caves in China. 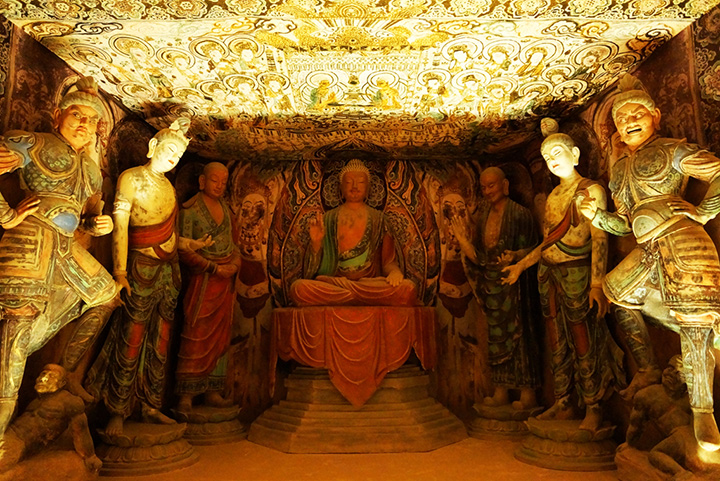 
Lastly we visited Cave 17 the so called Library Cave. The cave has a statue of the monk Hongbian in deep meditation. The cave when discovered contained nearly 50,000 manuscripts, silk banners and paintings, silk embroideries dating from before the early 1000 CE. These manyscripts are now scattered in museums in different parts of the world. Thankfully the British Library has digitalised the manuscripts that are with them. Among the major finds is the Diamond Sutra or Vajracchedika-prajnaparamita-sutra' in the original Sanskrit. It is one of the major texts of the Prajnaparamita.

It must be mentioned of the great work that the Dunhuang Academy and the Getty Institute are doing in restoring the caves and digitising the caves’ paintings. A step has been taken where the entire paintings and images of a few caves have been successfully digitised and is being exhibited in a museum near the caves. It may be that in a few years the entry to the caves will be closed to visitors and they can see the digital reproductions. This has already been done in case of Tutankhamun’s tomb in Luxor, Egypt where visitors cannot visit the original tomb anymore.

" Hi, I'm Wonder, Mr. Gautam Sen's travel consultant! Are you interested in Mr. Gautam Sen's Dunhuang Mogao caves experience? Want to know his trip itinerary, accommodation, transportation or other arrangements? Feel free to contact me, and I will be glad to tell you more stunning stories about the places he visitied. Or, if you want to customize a tour on your own, I'm always ready to help at any time. Providing a quality premium experience during your journey as well as create a lifetime of memories for you in China is my goal. " 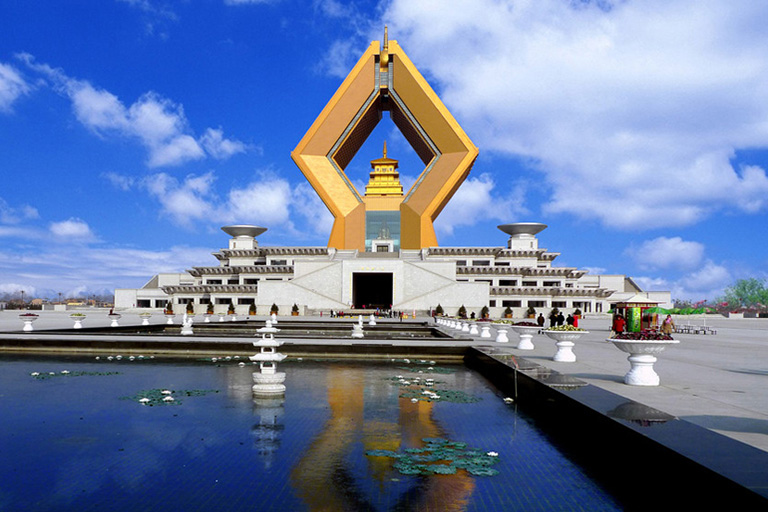