A trip may not only for sightseeing to release pressure, or learning culture and history to enrich yourself. A trip may be for an important goal to achieve one’s wishes. And this trip for Cindy from the USA is to help her nearly 80-year-old father find his birthplace in a small village in Shandong Province, after his leave for more than 40 years from China to the opposite side of earth.

“My father was born in Chengwu County in the 1930's, so I am not sure if his village is still there - I am trying to get more information to see if we can find it. We would really like to spend a few days in Shandong to see the place of our roots.” (Email from Cindy)

That moved me really when I received the email from Cindy, and on that same day, I contacted our colleague in Keza City in Shandong Province immediately to help find the village Cindy mentioned. But at first, we could not find the exact place for Cindy, and after several communication and so many complicated searches on maps and asking local villagers and one of the village officers, we finally successfully found the exact village where Cindy’s father has been born. Cindy and her family showed more reliance on me and extend their thanks for me to find that important place for their coming China trip. I now still feel very happy to customize a China trip for them, but more importantly, I feel really proud to help them achieve the longing for the original birth village for their dear elder father who cannot fly too long time back to his hometown.

Cindy and her husband took their son and daughter to China on June 19, 2019 from Jinan, the capital of Shandong Province. And another touching part is that Cindy’s elder male cousin specially and surprisingly flied from Shenzhen to Chengwu to reunion with them in their hometown. I was influenced a lot after receiving the photo from Cindy, since I can really help my customs and others make their wish or dream come true through my effort and sincere hope for love in the world. 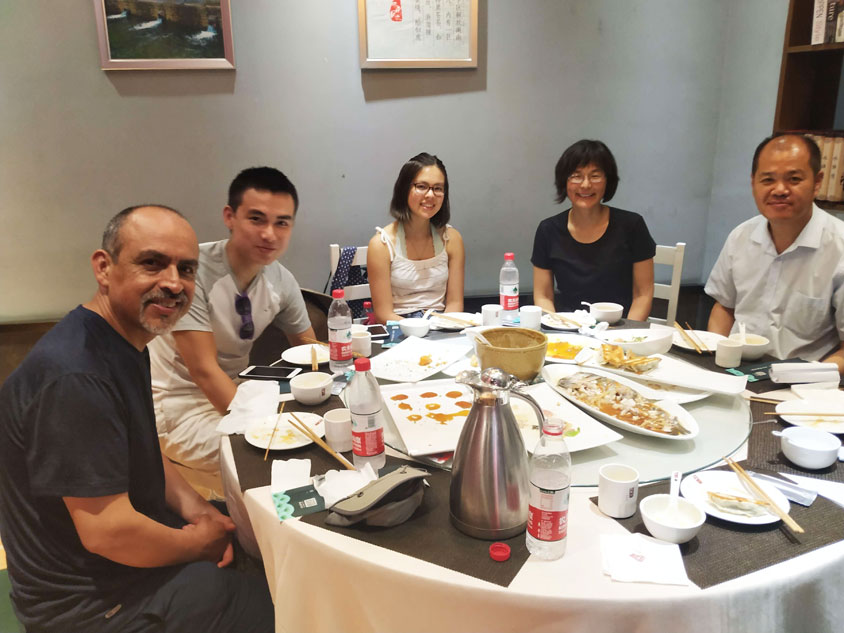 Cindy's Family Reunioned with Her Cousin in Chengwu 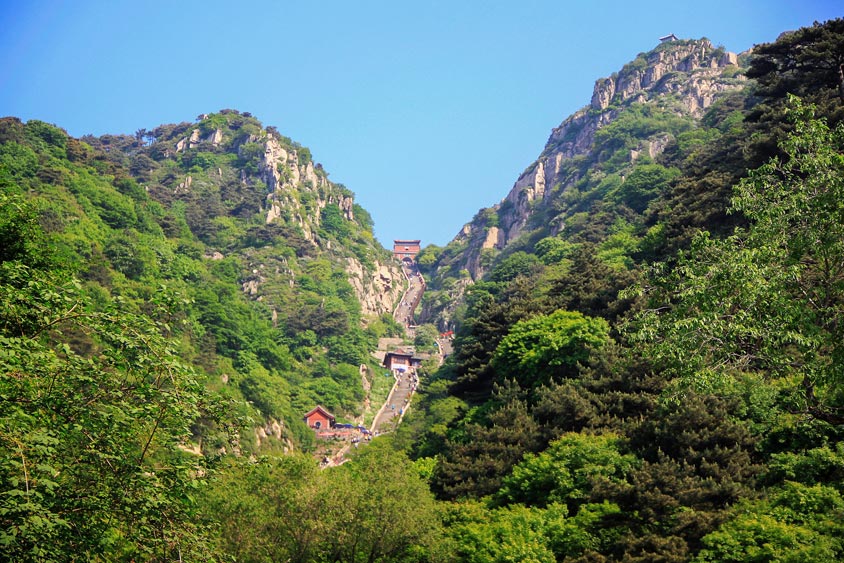 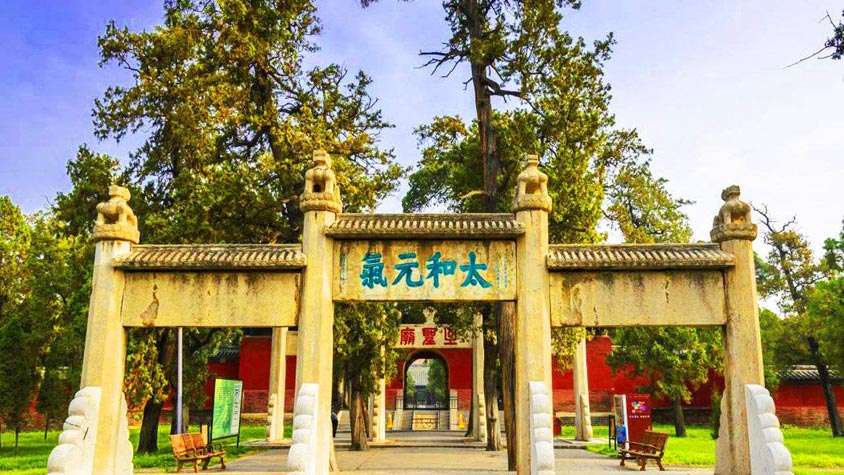 And after they said goodbye to their cousin, the family of four transferred to Huangshan with a fresh high speed train riding experience. Our local guide took them to the world impressive Yellow Mountain to see the odd stone and fabulous natural views with some hiking experience. After they went down the mountain, our driver also transferred them to the most classic Hongcun Village and Xidi Village to admire the beautiful Anhui style old villages. 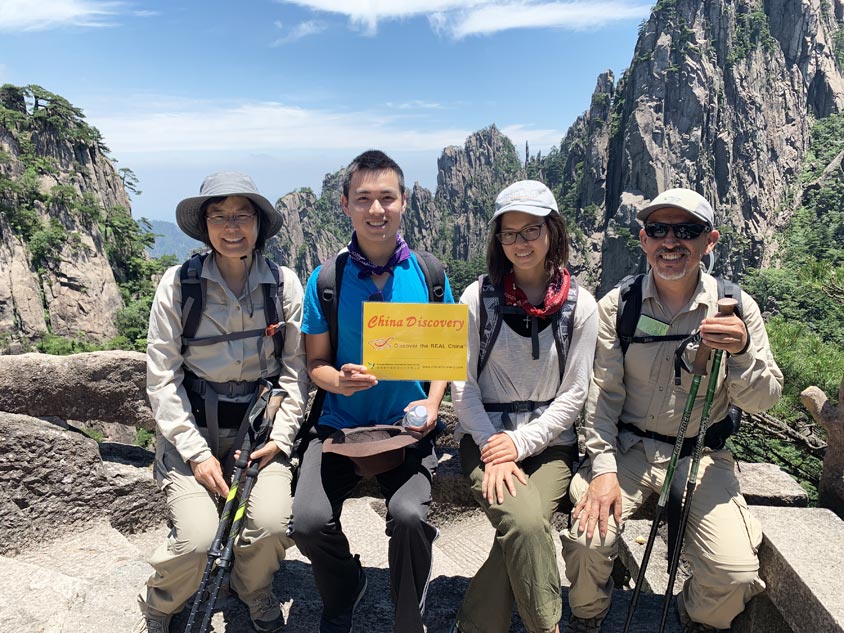 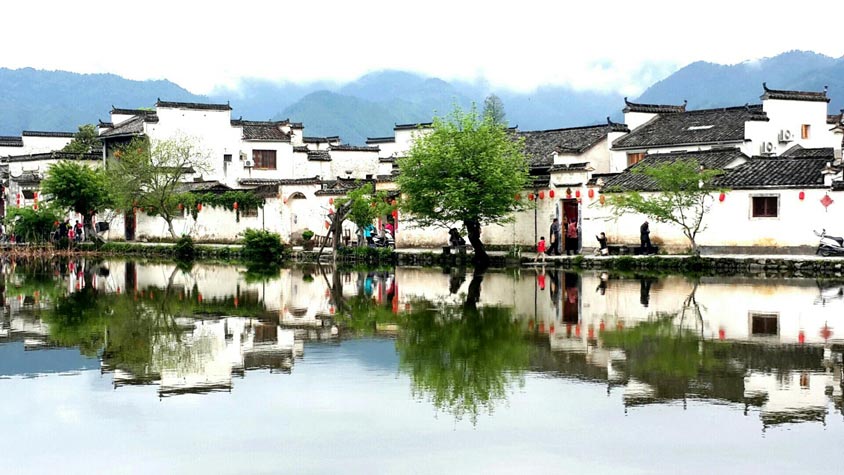 For Cindy and their family’s likes, I also arranged Zhangjiajie to let them enjoy the charming landscape at Zhangjiajie Wulingyuan National Forest Park. During those two days, they hiked high to Huangshizhai and lower in the deep valley of Golden Whip Stream with pleasant atmosphere. Moreover, they visited Yuanjiajie to see the amazing Avatar Mountains and the splendid sea of pillar peaks at Tianzi Mountain in the northeastern part of Wulingyuan park. 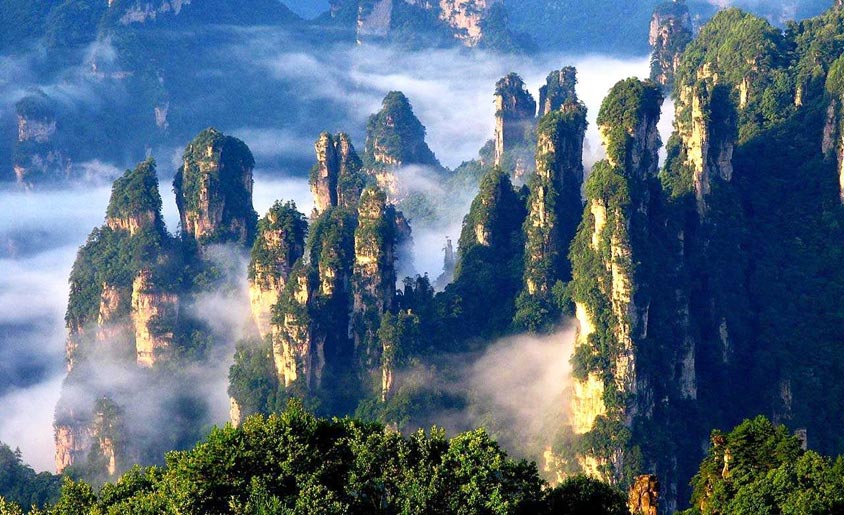 After nearly 10 days’ discovery in China, Cindy’s family flied to Beijing, the capital of China, to see its royal quality. At the early afternoon, our local guide took them to stroll in the must-see Forbidden City and Tiananmen Square to see the splendid ancient palaces. And on their second day in Beijing, I arranged the hiking experience at Jinshanling Great Wall where is really great to see wider great wall and original natural views. Apart from that, Cindy enjoyed the visits to see local life and more conspicuous places of interests, such as Hutongs, Temple of Heaven, Summer Palace, Beihai Park, and so forth. 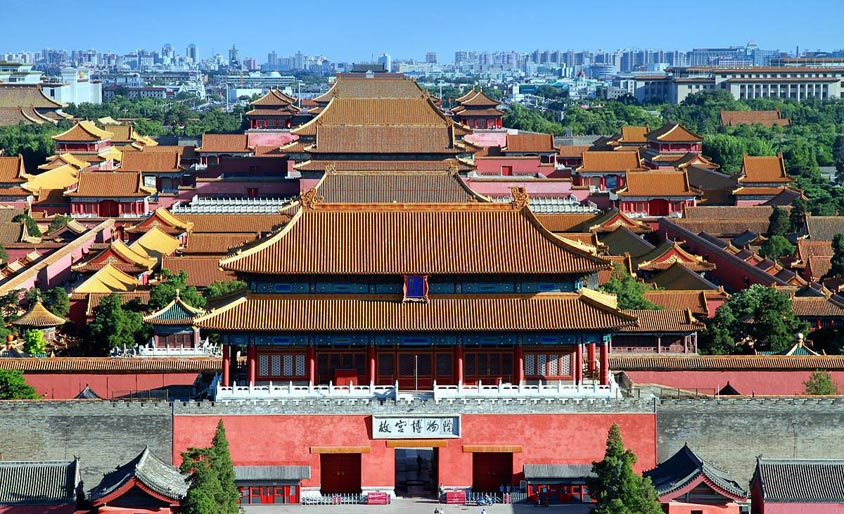 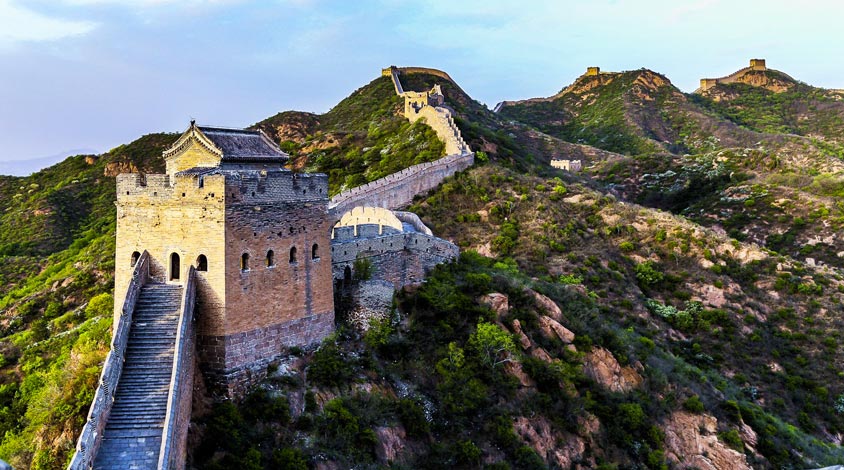 Cindy shared their comments and experience of their meaningful China trip on Trip Advisor:

After researching and reviewing a number of tour companies on the web, we chose China Discovery for a 15 day custom trip to China from mid-June to early July. This is the China Discovery stationed in Chengdu, China and associated with Chengdu Bamboo International Tours Company. I was nervous about going with a company located in China that I only communicated with through email and that I had never heard of before, but their reviews on Trip Advisor were so strong and the tour agent that worked with me, Wendy Dan, was so responsive and professional that I decided to take a (potentially really big) gamble and sign up with them. The price for the tour was also very reasonable, especially since this was a completely custom tour in which my family of four would visit specific places in Shandong, where most tourists do not go, including a small village where my father was born, and then travel to Huangshan, Zhangjiajie, and Beijing.

In fact, we weren’t sure if the village was still there, so Wendy engaged her network of contacts and actually confirmed the village was the right one. I can say now, several weeks after returning back to the U.S., that China Discovery is the real deal - they did what they promised to do, plus more. Our trip involved quite a bit of traveling - several plane flights and train journeys - logistically, China Discovery was excellent. They had a tour guide and driver waiting for us at each new location, and comfortable private, air conditioned van to take us to our hotels and our targeted destinations. Our first two tour guides, Bruce and Ellen in Shandong and Huangshan, were outstanding - very intelligent and articulate guides who pampered us. Bruce was unfailingly attentive during our visits to Taishan and the Confucius temple, which were rich cultural experiences, although the best part was visiting the old village. Ellen took us shopping at Huangshan and even bargained down some prices for us on Chinese brushes and inkstones, and then taught my kids some beginning Chinese painting lessons as we watched the sun set from a gorgeous viewpoint. Our tour guides in Zhangjiajie and Beijing were excellent at logistics and walked with us for many miles, including a beautiful hike along the Golden Whip Stream and a truly amazing and memorable hike along the Jinshanling section of the Great Wall.

The hotels we stayed in were air conditioned and comfortable and in outstanding locations, and the food was good - breakfast was typically ok to good, and lunch was always excellent. The only time we had stomach problems was when we ate some odd food at a restaurant that had not been recommended by one of our tour guides. There were several changes to our itinerary during the trip - one hotel cancelled our rooms and gave them to government officials instead, and a planned train journey was cancelled - these were handled well: the tour guide booked us in a similar substitute hotel near the original one, and Wendy arranged for a plane flight instead of the train ride, which only cost us $60 American dollars more per person. I never felt as if this company was trying to rip me off or be dishonest - they seemed to be sincere, honorable people who were trying their best to deliver their product - which was a great time touring China.

There was one incident in particular that we were extremely grateful for - my son lost his passport on the plane during a domestic flight and we only realized this at 4 in the morning when trying to check into the hotel in Beijing. I called Wendy on a Saturday and she contacted the airport and located the missing passport. We were so thankful! Overall, this was a fantastic experience. China was not what I had imagined it to be - we felt safe and the people were very friendly in the smaller towns (less friendly in Beijing, with the least friendly people being the foreign tourists!). Shandong, Huangshan, and Zhangjiajie were great places to visit, as was the Great Wall, as I had mentioned.

We were less thrilled with the crowds at the Forbidden Palace and other touristy destinations in Beijing, but it was still very interesting. I was worried about the temperature and the air quality, but both were pretty good for most of the trip. Thank you, China Discovery, for a wonderful visit to China that my family will never forget.

I feel very lucky to meet Cindy and their family in my work and let me help them and their elder father achieve the so important wish for the hometown far away. There are lots of immigrants in the enormous world, so it is really a highly meaningful feat for me to help anyone in our world find his original birth place.

Hi, I'm Wendy, Cindy’s travel consultant. Are you interested in their 15 days trip to vast China? Please feel free to contact me for more details of their travel such as trip itinerary, accommodation or other arrangements. If you want to take a similar trip or customize your own China tour, just e-mail me. It's my pleasure to invite you to our country and join us in appreciating this charming land. 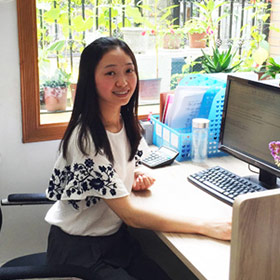 Other Stories of Similar Route 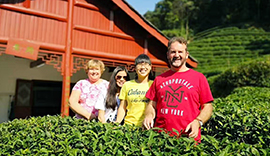 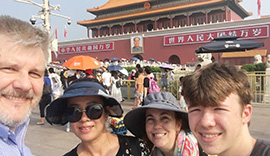 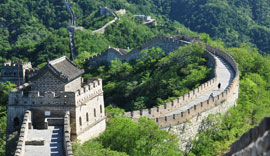 15 Days Trip to China - Family of 4 from New Zealand 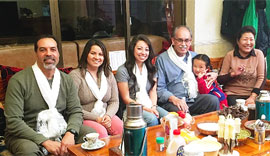 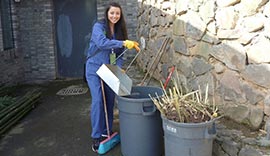 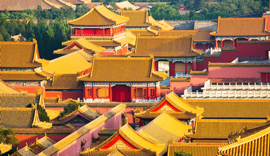 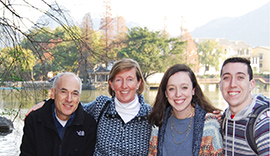 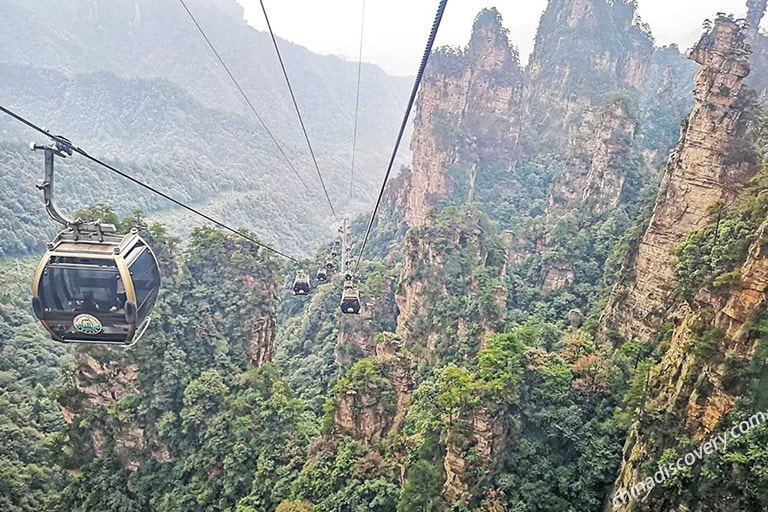 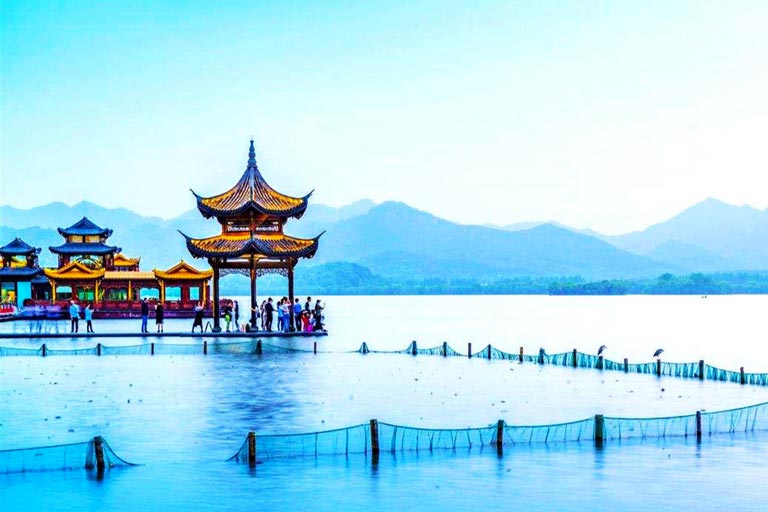