I highly recommend this company. They organized a great trip for us and we managed to see a far bit of the country.

We started in Beijing had 4 days there and we went to The Forbidden City, we paid extra as we didn't know about it but you can go to the top and overlook Tiananmen Square which was amazing, Summer Palace, Temple of Heaven ,had a rickshaw ride to the Hutongs and a walk around Beihai Park and saw the White Pagoda. We went to the Mutianyu Great Wall. For us this was the highlight we went up on the chairlift then walked from watchtower 6 to 12 and back again and we went back down on a toboggan it is the quieter of the Wall walks and you can get photos without lots of people in them. We also snuck in a bike ride around Shichahai Park. Nights were on our own so we went and saw a Peking Opera Show which was different but enjoyable and found some food markets which sold weird insects on sticks just interesting to see, the markets were called Wangfujing snack street. 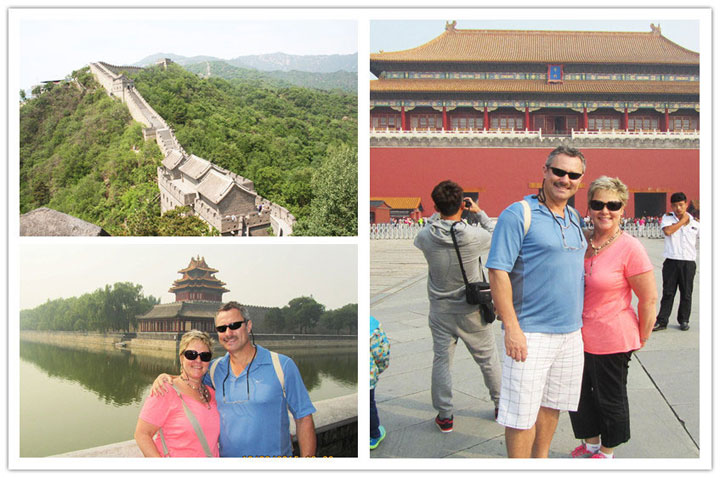 Amazing Attractions in Beijing, photo shared by our customer Marina

Next we were put on a train to Datong which is a "D" Class bullet train (only goes to 241kph) only the "G" Class from Beijing to Xian goes faster except the Maglev bullet train in Shanghai goes even faster (431kph over 7 mins).

In Datong we went and saw the Hanging Temple amazing and the Yungang Grottoes they were spectacular both well worth seeing. Then we drove down to Pingyao such a wonderful city with lots of atmosphere. Here we walked the city wall and went to the first bank of China and went and visited the Court House.

Before being put on a plane and we flew into Xian, this was just a 2 day stop to see the Terracotta Warriors, wow we both got goose bumps an amazing feeling to stand and look at them, we also went to the Wild Goose Pagoda and Muslim Street a very vibrant market very interesting. At night our guide suggested we go to a Dumpling Banquet and Tung Show food was good but the show was fantastic. We also hired bikes and rode around Xian City Wall it is approx 14 kms around and takes about 1 1/2 to 2 hrs to complete but we loved it. 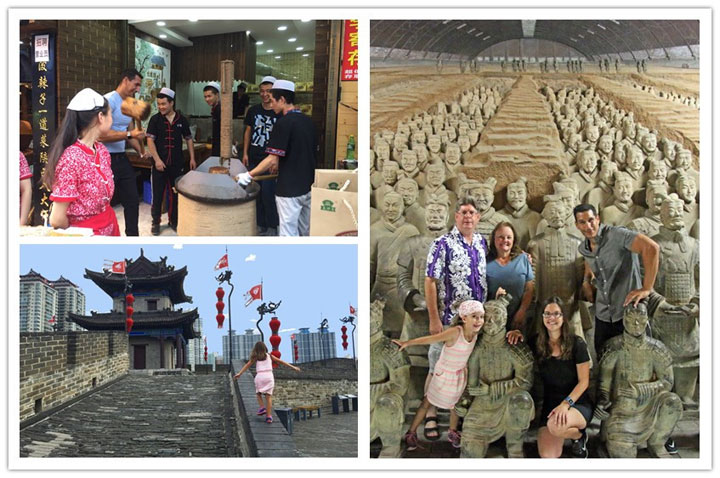 Next we were put on a plane to the City of Chengdu where the Chengdu Panda Base is , was very excited to see my first Chinese Panda and lucky for us it was breeding time and saw 3 two week old pandas in incubators and we were very lucky to watch the pandas being very active. 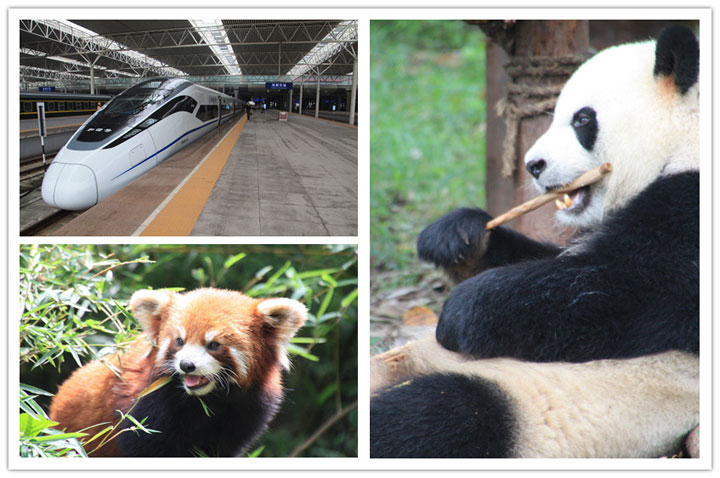 Next stop a flight to Guilin were we visited the Reed Flute Cave , a nice big cave with lots to see and lit up in beautiful lighting, a walk around the Elephant Trunk Hill and then an evening meal which we were offered snake and declined as it was in a cage and were going to cook it for us. A trip down the Li River on boat was very nice (if you have been to Vietnam it was. Try similar scenery as is at Halong Bay but this is on a river not the ocean ) it is also the scenery on the 20 Yuan note. 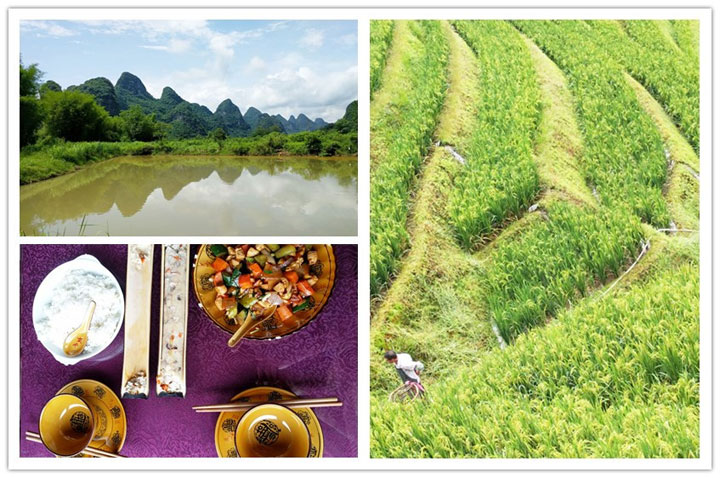 Picturesque landscape of Guilin, photo shared by our customer Elisa

Next stop Chongqing where we picked up our cruise boat Yangtze Gold cruises boat 8, for a 4 nights and 3 day cruise down the Yangtze River. Our room was ok 2 single beds so we were offered an upgrade which we took so ended up in a king size room which was more suitable at our cost. There were 300 people on our boat and 7 of us Westerners. They are very good at getting money out of you they offeted us VIP dining of course at our expensive but I'm really glad we did it as after talking to the other Westerners that weren't offered , it did get a bit busy and chaotic. Unfortunately the river in parts is very stirred up so looks very dirty. We did a couple of tours in the 3 days a couple were included and the best ones weren't. We chose to do all the tours as I didn't want to miss out and I did enjoy them. We did an evening one to a show called The Three Emperors or something like that it was fabulous a not to miss if you get the chance.

The three gorges we went through were very pretty but because of the timing we missed out on watching the boat go through the 3 locks as it was at 0100 in the morning. Was a little disappointed with the 3 gorges as you couldn't walk on the wall and mooned fault but the smog was pretty bad so you couldn't see a lot.

Next we flew to Shanghai where Modern meets old wonderful city. We headed up to the Financial building known also as the bottle opener for our first views of Shanghai spectacular. Then onto a Silk factory which was interesting enough. Next stop Jade Temple (by this stage a little over temples). Had an interesting walk around the Bazaar and had a go at bartering with the help of our guide which was fun, and them onto the Yu gardens which are very different to our gardens and very old . That night we were highly recommended to do the night cruise well worth doing but you have to get there at 5.30 pm buy your tickets and see what boat you can get on , we had to wait til 7 pm . The night lights of Shanghai are one of the best I have seen , the cruise lasts exactly 45 mins nor more no less but a must see. 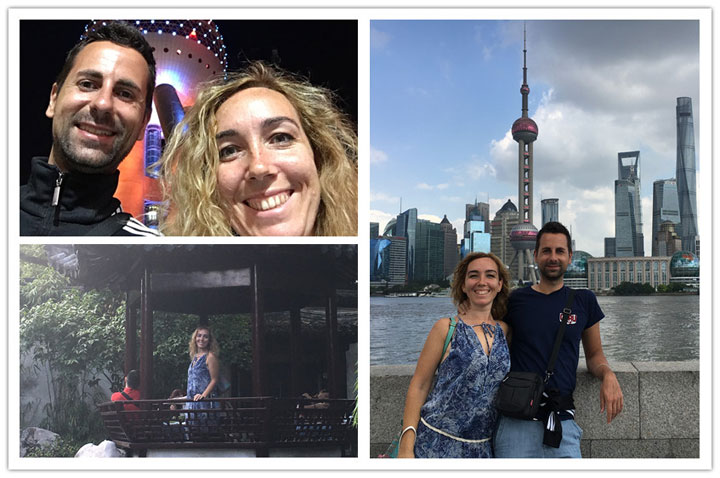 Next day we had a day trip out to Suzhou which is about an hour or more out of Shanghai, it's there a equivalent to a mini kind of Venice lots of houses on the canal was ok and then we went to Tiger Hill to see the Pagoda there that leans, if you don't have a lot of time in Shanghai I would miss this but it was enjoyable enough. 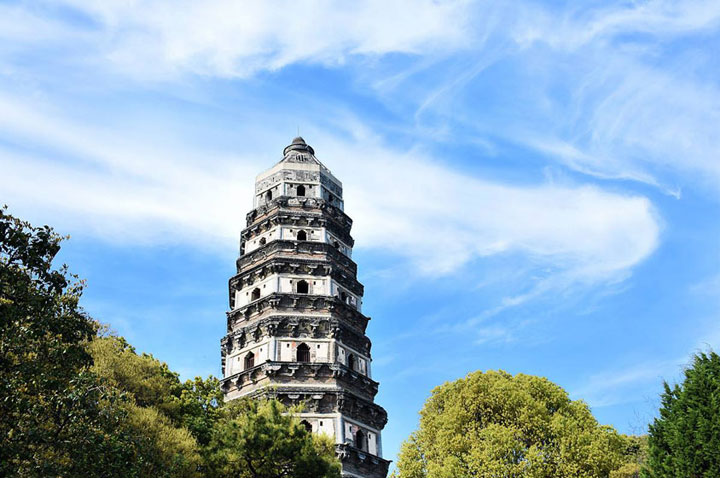 The Leaning Pagoda in Tiger Hill

Up nice and early again and we did the walk on the Bund which means waterfront in Indian and a walk to Nanjing Road for shopping the first shopping centre in Shanghai. We were then taken to the Urban planning exhibition centre actually very interesting showing the growth of Shanghai. Then we moved into the French Concession area where the French resided back in the day very different styles of housing.

The next day we had as a free day so we decided to take the fast train the Maglev for a spin and had a blast we got a returning ticket and got up to 431 kph over a 7 minute journey was lots of fun.

So my overall rating of China is 9/10

Crowded: If you don't like crowds or queues this isn't the place for you , also as we experienced the month of July and August is there holidays so it is actually there busiest time except in the first week of October which is there National Holiday.

Weather: Also the weather at this time of year is very hot and humid +++++ no exaggeration, you just walk out of a place and sweat is dripping off you so a fan and an umbrella is highly recommend.

Toilets: The toilets are very backward most are squatting and you need to bring your own toilet paper and hand wash and it's quite funny cos the guides will say this toilet is 5 star.

Guides: The guides with this company were excellent spoke great English very knowledgeable and professional and very willing to help you with anything and if you want to change a few things around they will try and help with that too.

Food: Found the food great in some places a little too spicy but the guides helped with our choices so that was great.

Thank you China Discovery a wonderful holiday and I highly recommend this company. Great travels!

" Hi, I'm Lyn, Mr. Paul's travel consultant. Are you interested in Paul's 22 Great Days in China 2017? Want to know his trip itinerary, accommodation, transportation or other arrangements? Feel free to contact me, and I will be glad to tell you more stunning stories about the places they visitied. Or, if you want to customize a tour on your own, I'm always ready to help at any time. Providing a quality premium experience during your journey as well as create a lifetime of memories for you in China is my goal. "