How to Plan a Pingyao Tour | Pingyao Trip Planning

Situated in central Shanxi Province, Pingyao is the location of the famous Pingyao Ancient City, a remarkable well-preserved ancient city of China that has been listed as UNESCO World Cultural Heritage. Authentically keeping the core of Shanxi culture and history, Pingyao is one of the top must-visit destinations in Shanxi and an excellent halfway point between Beijing and Xian. When planning your Pingyao tour, you must consider a lot of factors to make sure your Pingyao trip go convenient and interesting. When is the best time to visit Pingyao? What are the must-sees in Pingyao? What’s the best and fast way to get to Pingyao Ancient City? Which area is recommended staying in Pingyao? Here China Discovery provides you the most useful and comprehensive Pingyao trip planning ideas and advice to help you grasp the whole picture and arrange a wonderful Pingyao tour.

Top Places to Visit in Pingyao

Located just 6 km southwest of Pingyao Ancient City, Shuanglin Temple is a World Heritage off the beaten track, but definitely worthy of your exploration. It is a temple complex with a long history of over 1,000 years. A large collection of over 2,000 ancient painted clay sculptures wins it the honor of “A Museum of Chinese Ancient Sculptures”. The temple is very quiet with few tourists. There are 10 shrines symmetrically distributed in three courtyards. Spending several hours in the temple, you can see thousands of painted statues made in different figures (Buddhas, Bodhisattvas, saints, mythical and historic characters…), different facial expressions and gestures, different crafts from each dynasty. The top treasures of Shuanglin Temple are the sculptures of four imposing Heavenly Kings, Wei Tuo and Avalokitesvara, Thousand-hand Bodhisattva and the eighteen arhats.

Known as the largest Shanxi courtyard house, Wang's Family Compound is considered to one of the best examples of ancient residences in the existence in Northern China. The local wealthy Wang Family built the compound during Ming and Qing Dynasties for over 300 years, expanding it to be a huge estate covering 250,000 square meters, 3courtyards and hundreds of rooms. Inside the multi-tiered walls, you can walk though alleys to visit each courtyard, view layered roof of gray tiles, many elaborately decorated houses of living rooms, private schools, gardens, ancestral hall, etc. From the large scale to small carvings and decorations, the compound just likes a cultural museum, for you to learn the layout and construction of classic Chinese buildings and know the old rich people lifestyle.

Other Tourist Attractions in & near Pingyao

Beside the above sites, tourists can also pay a visit to Zhenguo Temple and other attractions nearby Pingyao. In Pingyao, Zhenguo Temple is another heritage property which is most famous for its old wood structure of Wanfo Hall and massive Buddhist frescoes. Qiao’s Family Compound located between Taiyuan and Pingyao is also an outstanding residential complex showing the owner’s profound financial power and superb ancient architectural art. On your driving journey to Wang’ Family Compound from Pingyao, you can tour Zhangbi Ancient Castle en route. It is a unique fortress which has a long tunnel underground and a cluster of ancient buildings above. Caves underneath were used for food storage, living quarter and operation command. You can learn some interesting combat and survival skill during the ancient wartimes. About 1 hour’ s drive from Pingyao Ancient City and 30 minutes’ driving from Wang’s Family Compound, Mount Mian is a large National AAAAA scenic spot and the cradle of “Cold Food Festival” of China. The mountain offers tourists both stunning natural scenery on the cliff and lots of antique-style architectures like temples, Taoist palaces, pavilions, towers, archways, etc.

▶ Top Things to Do in Pingyao | Pingyao Nightlife, Activities & Festivals 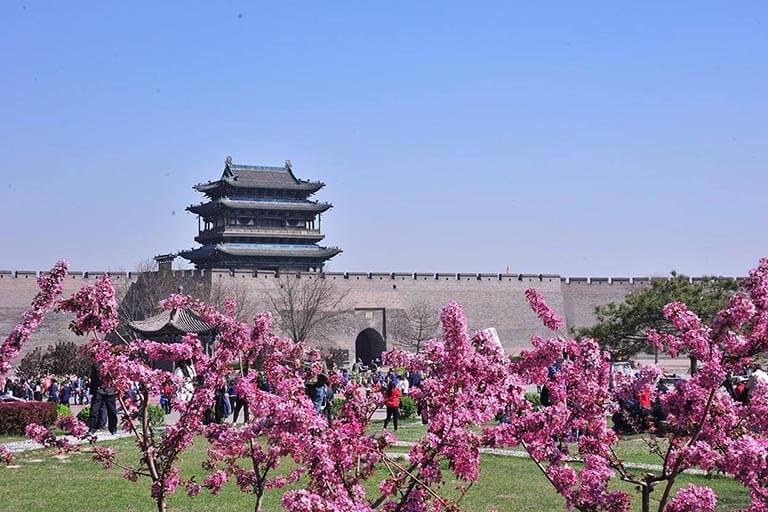 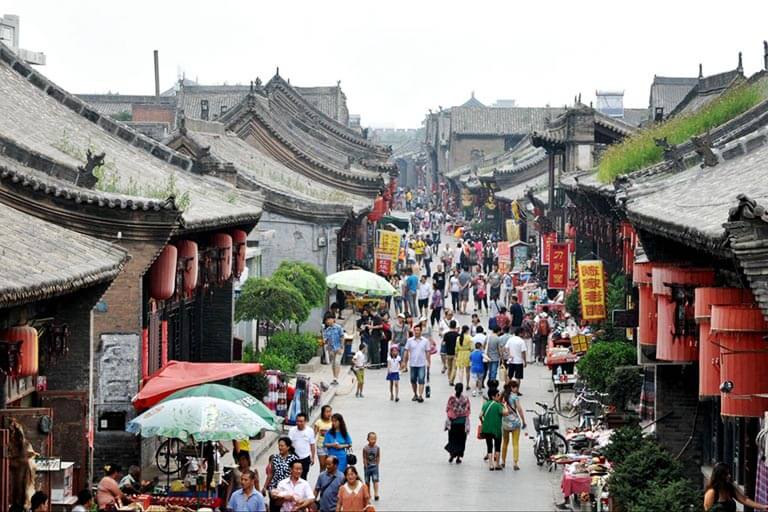 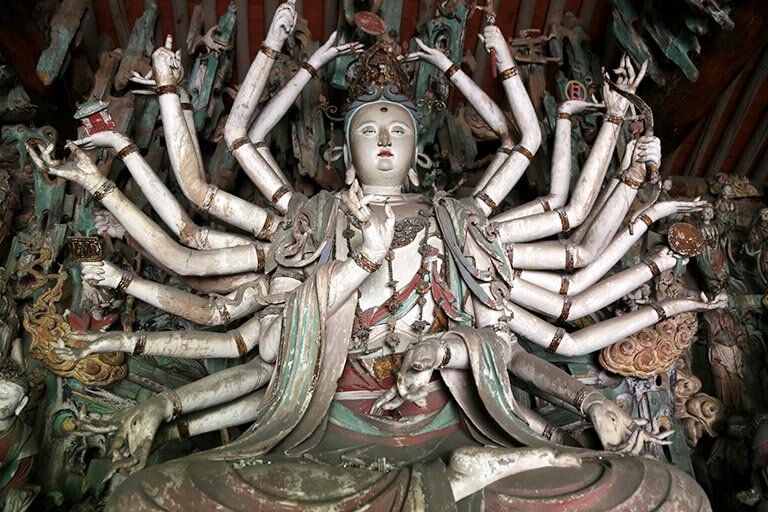 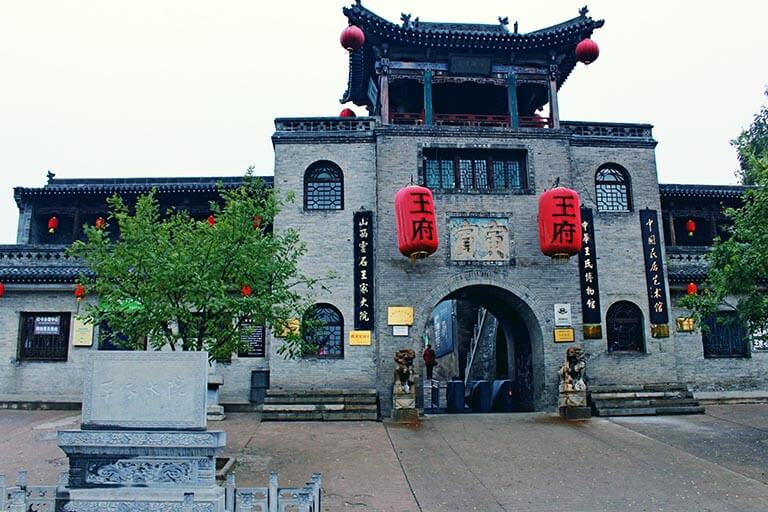 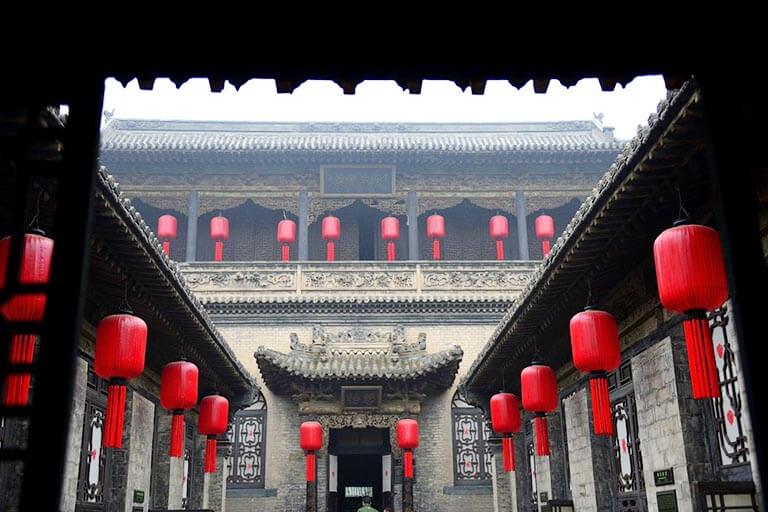 How Many Days to Stay in Pingyao

According to your plan, you can take 1 day or 2 days to discover Pingyao except the arrival day. And, 2-day Pingyao tour is much more popular, because you can take most of your time visiting more must-sees and getting in-depth insight to ancient Pingyao and China.

The first day is to explore main spots in Ancient Pingyao City, get real sense of history in the old walled city, capture glory of this China’s previous financial center and watching local daily routine. It’s quite fun to stay overnight in the ancient city to watch the famous Encore Pingyao and take an evening stroll through the old streets. 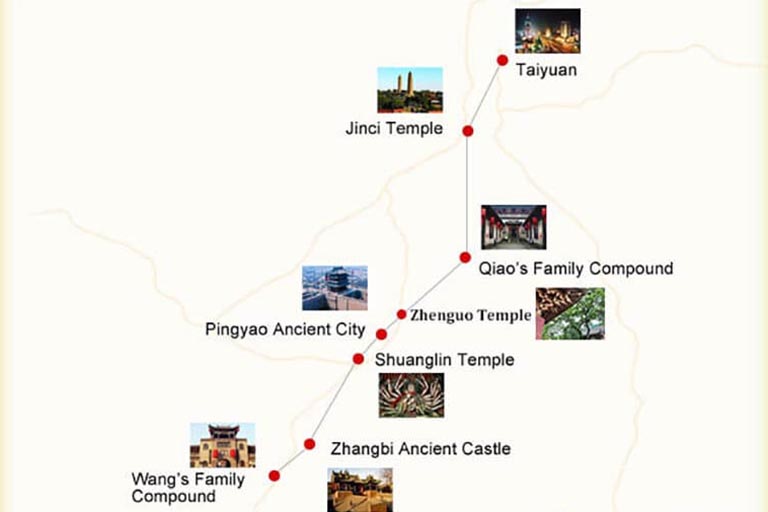 Since most places to visit in Pingyao are cultural sites, so you can visit Pingyao all year round. Being an inland county in Northern China, Pingyao has a Temperate Continental Semi-arid Monsoon Climate, featuring in four distinct seasons. Its annual average temperature is around 10.6℃. It rains a lot in July, August and September and may snow in late December and January. July is the hottest period of Pingyao when the monthly daytime temperature often rises up to 35℃ and still keeps around 20℃ in the evening. The coldest time is January, usually temperature at day and night drops below zero. It’s very cold in Pingyao in winter but some local featured festivals will be held during this time. Considering outdoor temperature and travel convenience, the best times to visit Pingyao are September and November in autumn when temperature is pleasant and less crowded than during national public holidays, and January when traditional Chinese New Year is celebrated via various local folk shows and snow scenery is beautiful. 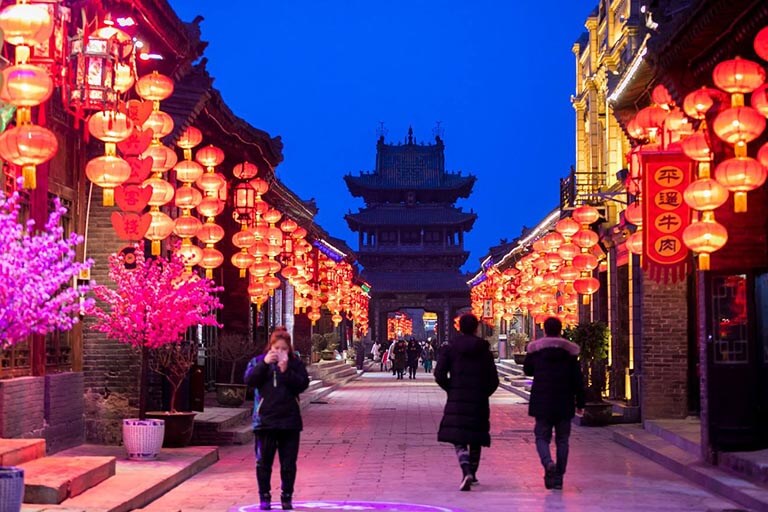 How to Get to Pingyao

Pingyao is a tourist county located in Jinzhong City, central Shanxi Province. Based on your departure city and preferred transportation, you can choose to take a train or flight with extra transfer to get to Pingyao.

Thanks to the operation of Datong-Xian High Speed Railway, a fast and convenient high speed bullet train travel to Pingyao is realistic and popular. Currently, you can take high speed bullet trains to Pingyao from Beijing (about 4 hours), Xian (about 3 hours), Chengdu, Chongqing and other cities out of Shanxi, and from Datong (3-3.5 hours), Taiyuan (30 minutes), Linfen, Jiexiu and more cities within Shanxi. After arrival at Pingyao Ancient City Railway Station (Pingyao Gucheng Railway Station), you will take about 20-minute driving to Pingyao Ancient City and other attractions in Pingyao.

Take Flight to Pingyao via Taiyuan

Pingyao has no airport and the nearest airport is Taiyuan Wusu International Airport (IATA: TYN), which lies 100 km (2 hours’ ride) away from Pingyao. If you prefer a time-saving air travel, or intend to visit Taiyuan, or travel long distances, you can first fly to Taiyuan from Beijing (about 1.5 hours), Shanghai (about 2.5 hours), Guangzhou (nearly 3 hours), Chengdu (2 hours) and other Chinese cities. And then, take a private driving from Taiyuan Wusu International Airport to Pingyao or take a high speed train from Taiyuan to Pingyao.

▶ How to Get from Taiyuan to Pingyao

How to Get Around Pingyao

Pingyao is not very large, so it’s quite easy and convenient to transfer between Pingyao Ancient City and other attractions within a short time. Taxi and bus are the main local transportations available. Thinking about cost of time, sense of direction, language barrier and better understanding of all cultural sites of Pingyao, it’s important and helpful to book a Pingyao tour package with China Discovery. We will pick you up at the airport and escort you to your hotel in Pingyao by a safe, clean and comfortable vehicle. With our help, you don’t need to worry about the additional transfer, just rest well and enjoy landscape on the way.

▶ How to Get to & around Pingyao | Useful Pingyao Transportation Maps

Where to Stay in Your Pingyao Tour

The best accommodation area in Pingyao is inside the old city wall of the downtown, where has a wide selection of antique hotels, ranging from luxury starred hotels to budget guesthouses and is located within walking distance to the main ancient sights and lots of restaurants and shops. Main streets like West Street, North Street and Ming and Qing Dynasties Street are the most popular locations, because they have many hotels near bars, restaurants lively at night. But the room rate is much higher and can be a little noise at night. You can also find quiet hotels to rest well in some alleys near the main street. One unique accommodation experience is that, most hotels in Pingyao Ancient City are local traditional courtyard house decorated with both classic features and modern facilities. Besides, you can choose to stay in a hotel just a few minutes outside the old city wall.

▶ Where to Stay in Pingyao 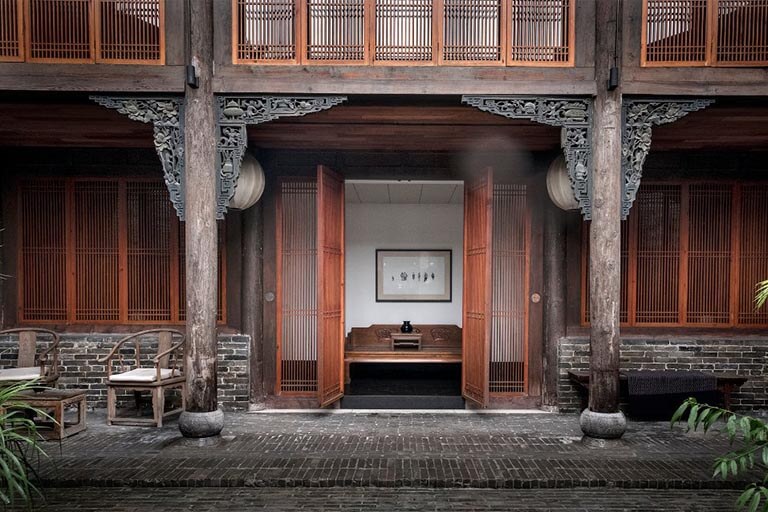 How to Extend Your Pingyao Tour

Recognized as “An Art Museum of Chinese Ancient Architectures”, Shanxi has over 70% of well-preserved ancient buildings before Song and Jin Dynasties and 3 UNESCO World Heritage sites. Beyond the ancient city exploration in Pingyao, you can also visit Datong Yungang Grottoes to witness magnificent Buddhist grottoes art and culture and cliffside Hanging Temple to experience miraculous feat of ancient engineering. Or, make a sacred pilgrimage trip to Mount Wutai - the top of Four Great Buddhist Mountains in China, immerse in Buddhist culture and mind-blowing nature. Even you can get to Hukou Waterfall (World’s largest yellow waterfall) to see the thundering Yellow River and view more splendors in Shanxi. 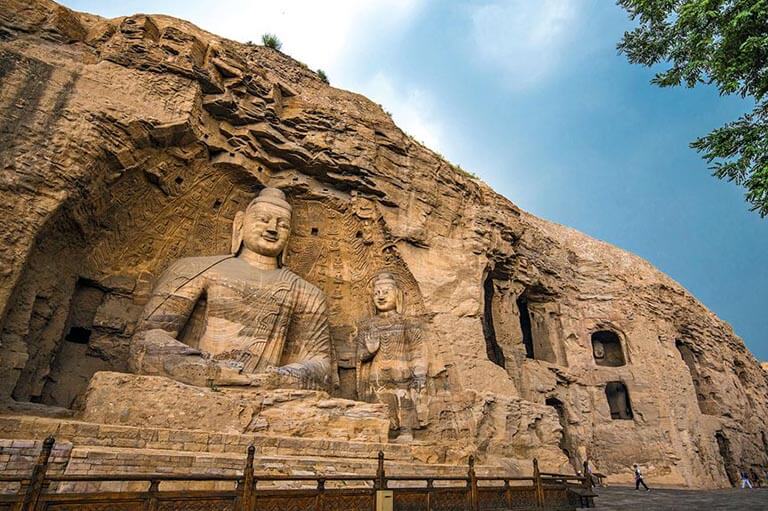 Long history and vast land make China a country filled with various great destinations to explore. With extra time, you can take the convenient transportation to visit Pingyao, other attractions of Shanxi together with Xian, Beijing and more destinations in China. A combined journey will help you learn and experience different Chinese culture. Just within a few hours’ high speed train travel, you can get to Beijing, take 2 to 3 days to hike the Great Wall and see many majestic imperial architectures, and travel to Xian, use 2 to 3 days to visit the lifelike Terracotta Army made over 2,000 years ago and lots of ancient tombs. It’s quite interesting to find the distinction and connection between these ancient cities. If you have more time, you can travel further to Luoyang, Shanghai and other Chinese cities. 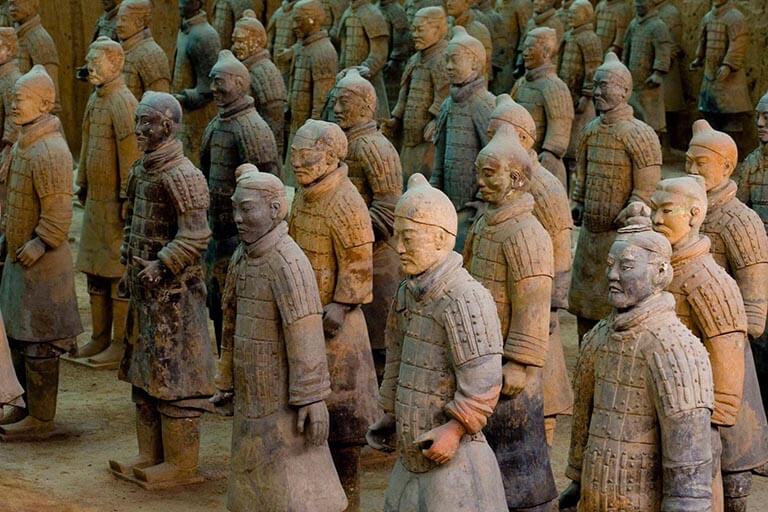 China Discovery is an experienced, professional and reliable travel companion devoted to offering high-quality and the best tour services for all travelers to China. In order to have a better travel experience of Pingyao and other parts of China, it’s highly recommended traveling with us. We not only has one-to-one tour planning and visa assistance before your departure, but also provide convenient transfer, knowledgeable local tour guide, excellent accommodation and dining arrangements based on your requirements. Thus, you can enjoy a China tour with worry-free transportation and better understanding of local culture and history. You may select from our most popular Pingyao tours or contact us to customize a special one! 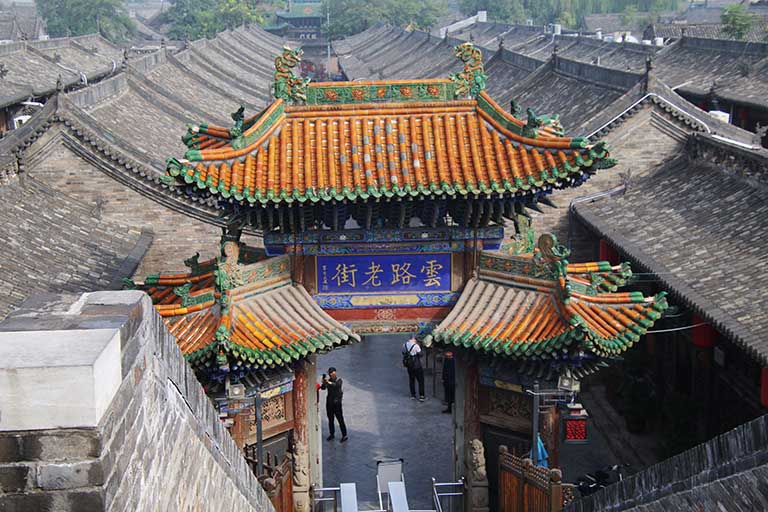