Once to be the center of politics, economy, military and culture of west Hunan Province in the South Song Dynasties for nearly 600 years, Laosicheng Tusi Site is materialization of Tusi system. Apart from the long history, you will also have the splendid ethnic culture and amazing nature scenery to explore.

The Tusi refers to the hereditary tribal leaders who were appointed by the central government to rule ethnic minority regions in south-central and south-west areas of the country from the 13th century and 20th century. The Tusi system was one special kind of administrative systems in multiethnic China and it regulated the responsibility, investiture, succession, geld, and reward or punishment of Tusi. Based on the theory of “administration according to minorities’ custom”, the Tusi system protects the balance of interests and mutual development of the central government and the frontier minorities. The Tusi City, the place where the Tusi governed and lived, is the most representative Tusi-related cultural heritage with most comprehensive information. With the help of the Tusi City, the schoolers can better study on the life style and cultural feature of Tusi system and ancient society of China.

Located in the west part of Hunan Province, Laosicheng (literally meaning old Tusi City) Site is a famed Tusi Relic Site where the 11th Tusi of Peng’s family began to settle in 1135. The governed area of Peng’s family covered ancient Xizhou(溪州) (including several counties like Yongshun, Baojing, Longshan, Guzhang in Xiangxi Tujia and Miao Autonomous Prefecture). With 25,000,000 square meters of total area and 250,000 square meters of urban area, there were large walls and buildings once in Laosicheng. According to the historic texts, there were eight streets and ten lanes with dense population and boisterous atmosphere.

Honored as the Machu Picchu spot in China, Laosicheng Tusi Site shows a great historical value and significance. It effectively filled the vacancy of Tusi system in archeology and showed the generation, development and extinction and Tusi system. Laosicheng Tusi Site was also a gathering place of Tujia nationality, so it offers precious historical materials to learn ancient Tujia nationality. As the living specimen of ancient China’s ethnic autonomy system, Laosicheng Tusi Site was listed in Key National Cultural Protection Unites in 2001 and Archaeological Parks in 2010.Having long been a quiet place isolated from the society, the cultural significance of Laosicheng was recognized by UNESCO became a World Cultural Heritage together with Tangya Tusi Site in Hubei and Hailongtun Site in Guizhou in 2015. Among the three, Laosicheng Tusi Site is the largest, oldest and best preserved one.

The central part of Laosicheng Tusi Site is perched in the mountainous area with Lingxi River flowing through. Main parts including Palace District, Office District, Residential Area, Education Zone, Burial Area and Sacrificing District are scattered along the river, independent but linked by lanes and rivers, making a hilly city with rational distribution, perfect function and pleasant landscape. Many ancient buildings like Peng’s Ancestral Temple, Yuhuang Pavilion and different Archways are preserved well. In fact, the central part of Laosicheng is an excellent model of scenic city in Southwest China. An ideal combination of Tusi City and external environment shows the harmony of politics and military as well as nature and human beings.

There is an architectural complex in the Religious District with an axis lined with Patriarch Palace (祖师殿), Huangjing Deck, Guo Tower and Yuhuang Pavilion. Patriarch Palace is the main building in this complex, covering 580 square meters. This ancient and majestic palace is a featured architecture with Tujia characteristics. It is a timber building with a double eaved roof supported by 34 nanmu columns. Both ridges and brims are carved with fine patterns. In front of the golden column in the center of Patriarch Palace is a cabinet housing the statue of the immediate ancestor. You can also find an iron bell in the palace made in 1531. When it rains, the palace will give off slight fragrance.

There is a 200-meter-long official way (exclusive for the officials in ancient times) leading you from the main street to the Peng’s Ancestral Temple (彭氏祠堂) in the center of Laosicheng Tusi Site, passing by four platform and five sections of steps. The escalating steps create an awe-inspiring environment. Peng’s Ancestral Temple, also known as Tuwang Temple (土王祠), was built in 1591 by the 24th Tusi. Two stone drum placed in front of the gate, each 250 kg, are said to be carried here from Wuguan Ping (50 km away) by a herculean man. The survived part of the temple is a crossing-bracket-type building supported by 18 Mahogany columns. There are memorial tablets of Tusi in successive dynasties housed in the temple and you can see lively wooden statues with delicate carvings. Some texts about the principles of feudal moral conduct are also collected here.

Ancient Tombs Complex (古墓群) of Tusi concentrates on Zijin Mountain. As the exploration data suggests, there are as many as 109 tombs of Tusi and other nobles. The scale of the tombs depends on the job title of the deceased. From the more than 30 excavated tombs, it can be judged that all the tombs are shaped as a stone arch and guarded by the stone guarders and stone horse. The tomb is surrounded by an enclosure and the only entrance is an iron gate. The walls in the tomb are decorated with beautiful patterns of plants and animals. Funerary objects are also abundant, like gold flowers, gold hair clasp, earrings and a diversity of jade articles.

Tusi Dezheng Monument is standing in the left side of the Official Site, 2.7 meters high and 1.2 meter wide. This monument is built in 1713 in memory of Peng Honghai – the 34th Tusi once making a great contribution to unification of China. In the 19th year of Kangxi, a traitor called Wu Shifan fled to Chenlong Pass which was easy to hold and hard to attack. With the help of Peng Honghai and his men, the army of Qing Dynasty attacked Chenlong Pass successfully. His life story and great achievement were inscribed on Tusi Dezheng Monument. Now this inscription enjoys important status in the archaeology for its calligraphy work as well as historical materials.

Laosicheng Museum is the symbolic building in Laosicheng Archaeological Park. It acts as a necessity to display Tusi system, Tusi culture, history of Tujia nationality etc. Occupying 2,000 square kilometers, Laosicheng Museum can be divided into 8 exhibition halls with different themes including the prefecture, Laosicheng relics, Tusi system, Xizou bronze columns, multimedia exhibition, folk-custom Culture, relics protection and conclusion. The cultural relics on display mainly focus on the archaeological achievement, and they accurately interpret the geological environment, infrastructure, and layout. Entering Laosicheng Museum is like admiring a fantastic historical scroll, and you can get a better understanding of the local culture and characteristics of the “Tusi Times”.

Hibiscus Town (Furong Town in Chinese), an AAAA Scenic Area 50 km away from Laosicheng Tusi Site, is an ancient town with a long history of more than 2,000 years. Originally named Wangcun, it was renamed as Hibiscus Town in that a famed movie Hibiscus Town starred by famous actress Liu Xiaoqing was shot here. A long waterfall flowing through Hibiscus Town, so people always call it the ancient town hanging on the waterfall. Hibiscus Town features in its peaceful and natural environment as well as unsophisticated folkways. Walking on the cobbled lanes, feeling the antique flavor and communicating with the simple but kind local people, you will get an enjoyable experience. 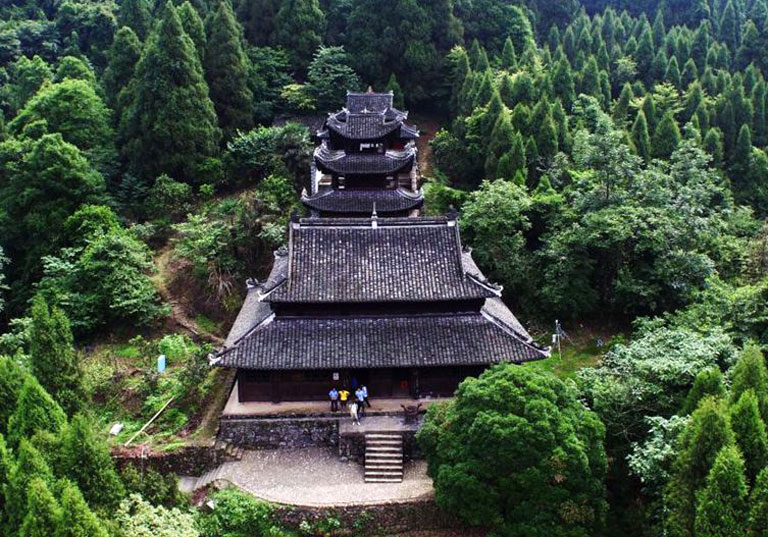 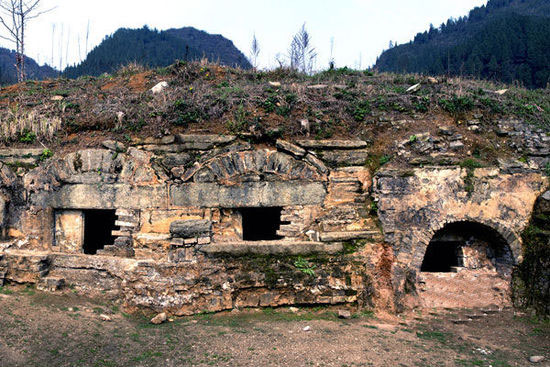 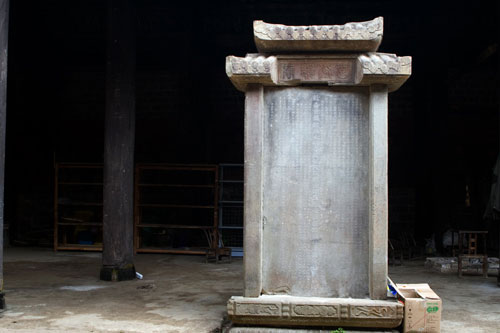 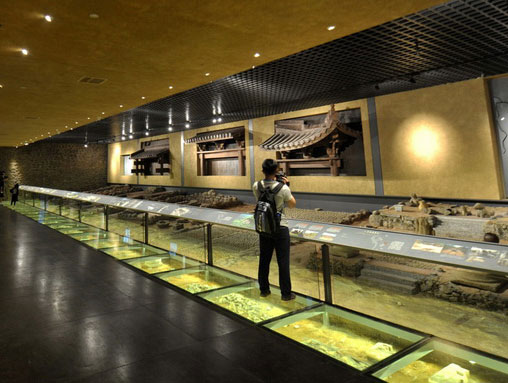 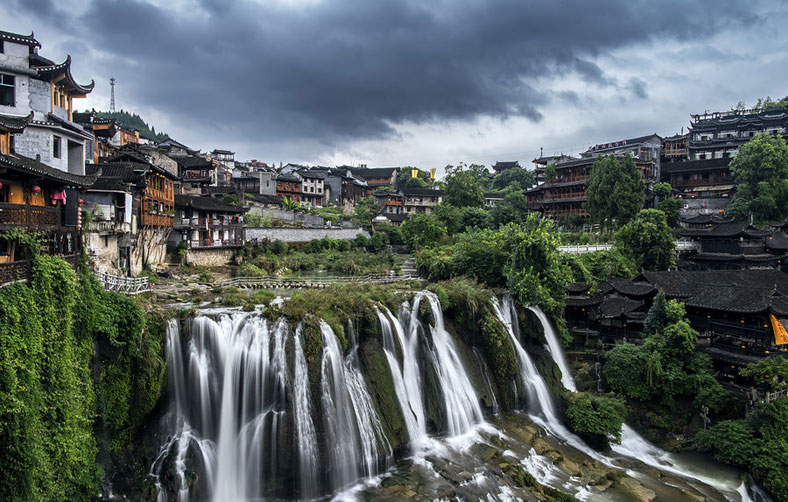 Where is Laosicheng Tusi Site

Laosicheng Tusi Site is located in the Lingxi Town, about 20 km from the east of Yongshun County, in west Hunan

How to Get to Laosicheng Tusi Site

Most tourists tend to begin their Laosicheng Tusi Site journey from Zhangjiajie or Jishou.

From Zhangjiajie: There are many daily buses from Zhangjiajie Bus Station which can bring you to Yongshun Countly directly. The ticket is nearly 40 RMB and 3 hours are needed to cover the distance of 100 km. Then you have to take a coach to Laosicheng Tusi Site within half an hour.

From Jishou: Buses starting from Jishou (the captain of Xiangxi Tujia and Miao Autonomous Prefecture) Bus Station are also available. With 3 hours’ time, you can get to Yongshun County. Afterwards, you still need to transfer to Laosicheng Tusi Site. 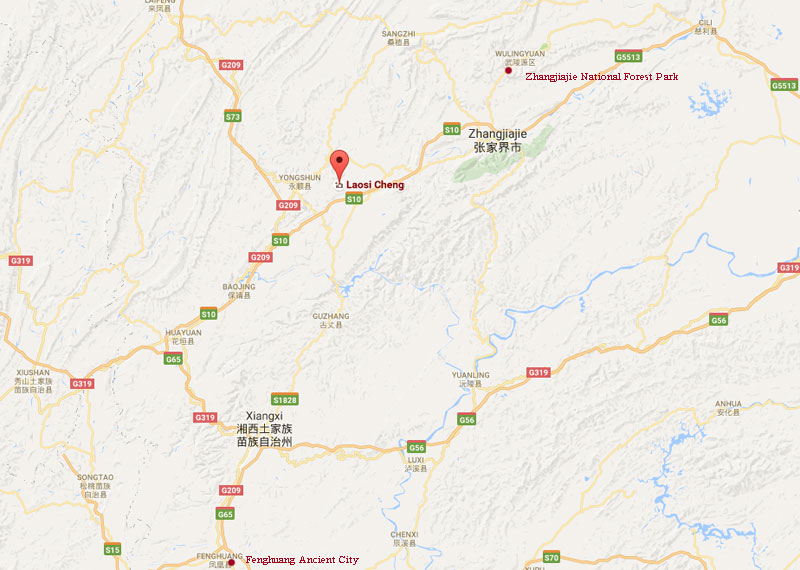 If you want to get rid of hustle of public transportation and troublesome navigation, you can book a private tour package which covers sightseeing, dining and transfer from us. Our knowledgeable local tour guide and skilled driver will escort you to Laosicheng Tusi Site with speed and convenience, and take care of all the details. You just need to focus on sightseeing.

How to Plan a Laosicheng Tour

It is suggested that you have a 5 or 6 days tour combining Yongshun Laosicheng Tusi Site with fabulous Zhangjiajie National Forest Park and impressive Fenghuang Ancient town.

Not far from Zhangjiajie National Forest Park, Laosicheng Tusi Site has always been chosen as an extension of Zhangjiajie tour. Starting from Zhangjiajie National Forest Park, you will get to the fantastic Laosicheng Tusi Site with half and two hours’ drive-time. After appreciating the exquisite forests, odd-shaped rocks, the limestones caves and breath-taking panoramic views of Zhangjiajie, you would be pleasant to seek the ancient history in Laosicheng Tusi Site or just immerse yourself in the peaceful nature. Three hours are enough for you to have a deep discovery, and then driving to Yongshun County to have a good meal. If you want to explore the folk custom of Tujia and Miao Nationalities more, don’t hesitate to visit Fenghuang Ancient Town. It is 195 km away on 3 hours and 40 minutes’ drive from Laosicheng Tusi Site. In Fenghuang Ancient Town, you can feast on the antique buildings, good-looking folk costumes and feature snacks.

Top 3 Xiangxi tours chosen by most customers to explore Xiangxi in the best way. Check the detailed itinerary, or tailor your own trip now with us. 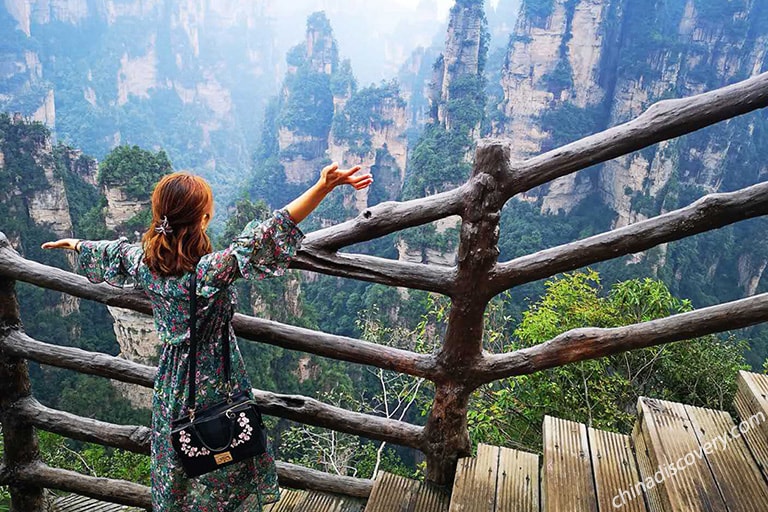 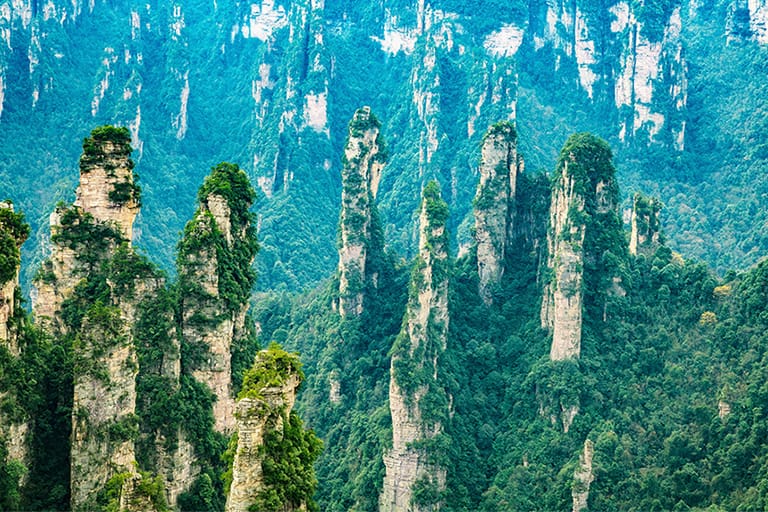