You are here: Home » Hainan Tours » Haikou Tours » How to Get to & around

Things to Do
Get There & Around

Haikou Transportation: Get to Haikou by Flight, Train or Cruise

Haikou (海口), also known as “the Coconut City”, is the capital city of Hainan Province. Located in the north of Hainan Island, Haikou City is not only a southern coastal city rich in tropical resources and natural beauty, but also a famous historical and cultural city in China, which has a history of thousands of years since it opened as a commercial port during the Northern Song Dynasty. Visitors can reach Haikou by flight, liner and train. This Haikou transfer guide will help you to know how to get to/around Haikou efficiently. 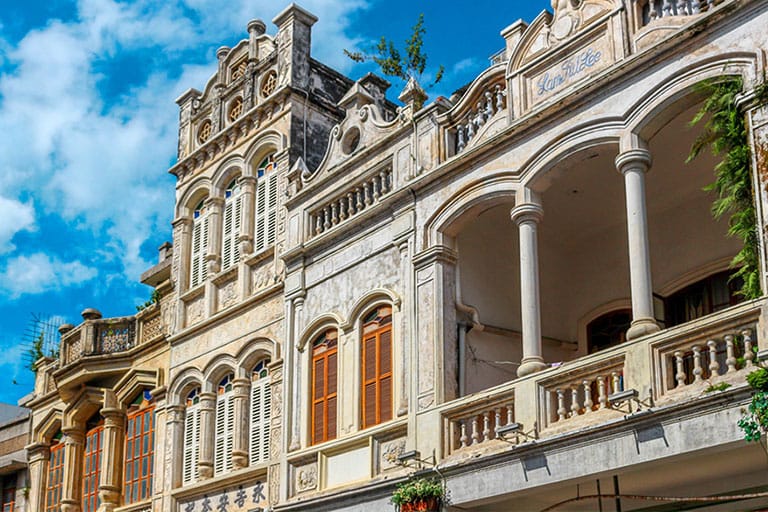 Haikou Meilan International Airport is about 25 kilometers southeast of Haikou City Center. It is one of the busiest airports in Hainan and the first airport in China which has an off-island duty free shop. Till the end of 2019, there are overall 2 terminals in Haikou Airport. The airport provides about 169 airlines, connecting over 105 domestic and foreign cities, including Beijing (4 hrs), Xian (3 hrs), Shanghai (3.5 hrs), Chengdu (2.5 hrs), Guangzhou (1.5 hrs), Chongqing (2 hrs), Hong Kong, Macao, and Taiwan, etc. in China and foreign cities like Seoul, Singapore, Sydney, Moscow, Bangkok, Kuala Lumpur, Bali, etc.

There are mainly 2 railway lines connecting Haikou with mainland of China and other hot destinations on Hainan Island, which are Guangdong-Hainan Railway and Hainan Roundabout Railway.

Haikou Railway Station is located along the seaside, over 20 km away from downtown Haikou, which takes 30~40 minutes by car. It’s an important stop of Guangzhou-Hainan Railway and Hainan East Ring High-speed Railway. There are normal trains from Guangzhou (11.5~13 hrs), Beijing (about 34 hrs), Changsha (19.5 hrs), etc. that may stop at this station. Trains that connect Hainan with cities on the mainland of China are normal trains, which means it might take much longer than flights. Therefore, it is generally not recommended for foreign travelers to choose.

Haikou East Railway Station is located in the downtown area and about 6 km away from the city center, which takes 20 minutes by car. It is the main high-speed railway station in Haikou city and mainly operates bullet trains to Sanya (about 2 hrs) and to other popular cities on Hainan Island. 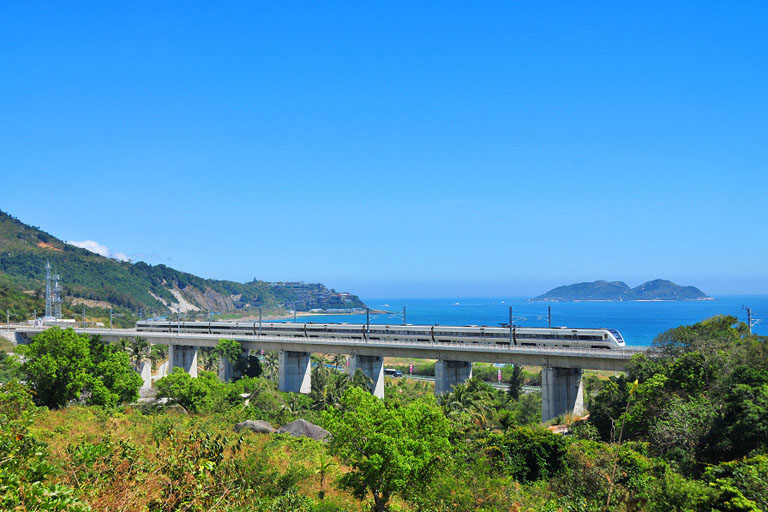 Sanya, the most popular scenic city in Hainan and one of the most popular winter resorts in China, is about 280 km (about 174 miles) away from Haikou. The best way to transfer between two cities and have an overview tour of Hainan Island is by taking bullet trains. Every day, there are nearly 70 bullet trains operating between Haikou (Haikou East, Meilan Airport, Haikou) and Sanya (Sanya, Yalong Bay, Yazhou, Fenghuang Airport) from 06:40~22:20. 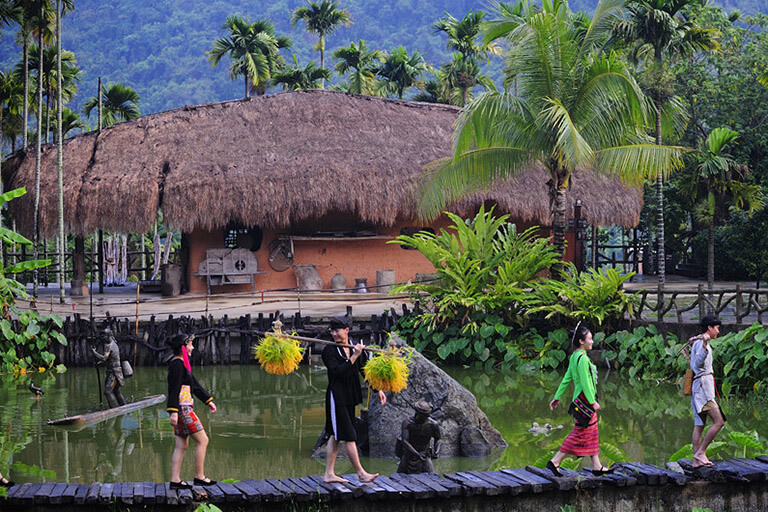 Taking a cruise into Haikou is a unique experience. Every day, more than 40 passenger ships sail to/from mainland coastal areas and Hong Kong, etc. Recently, most passenger ships to Haikou are from Hai'an Port (海安港) or Xuwen Port (徐闻港) in Zhanjang City, Guangdong Province. The ferry route is 15~24 miles in a straight line. The whole cruise journey takes 2.5~4.5 hours (include embarkation and disembarkation time and sailing time).

Haikou New Port mainly operates passenger and car ferries to/from Hai’an, Zhanjiang and Beihai. It is about 20 km away from Haikou city center, which takes around 40 minutes by car/taxi and 1.5 hours by public buses.

Xiuying Port is mainly bound for Zhanjiang and Beihai routes. It is about 7 km away from downtown Haikou, which takes 20 minutes by car/taxi and 50 minutes by public buses.

How to Get Around Haikou

By City Bus: There are over 80 bus lines in Haikou City, all of which are air-conditioned buses. Besides the “Meilan” Tourist Bus, there are also special sightseeing bus No.1 and No.2 can transfer you between the Five Officials Temple and Hainan Tropical Wildlife Park.

Worry-free Haikou Private Car Service by China Discovery: Want to get rid of the troublesome of finding taxi or city buses after landing or before departing and explore all the highlights in and around Haikou City without worrying about transfer? We China Discovery can help! Contact us to book a private car service in advance and get the best price!

How to Plan a Haikou Tour

Best Time to Visit Haikou: October ~ Next May

Normally, it takes 1~2 days for travelers to explore Haikou City, 1 day to visit historical sites, museums, architecture and old streets in the downtown area including Five Officials Temple, Hairui Tomb and Qilou Old Street, etc. and enjoy delicious local cuisines and snacks. Take another day to immerse yourself in the embrace of nature, bathing in the tropical sun. You are suggested to rent a car and visit East Harbour Mangrove Forest, Hainan Tropical Wildlife Park and Leiqiong Global Geopark in one go.

To fully indulge in the coastal landscape and activities, lie on the beach and bathe in the sunshine, you may continue your tour to Sanya (3~5 days), which is praised as “China's tropical answer to Hawaii”. It is one of the best places to visit in China in winter and an ideal place for vacations and honeymoon. 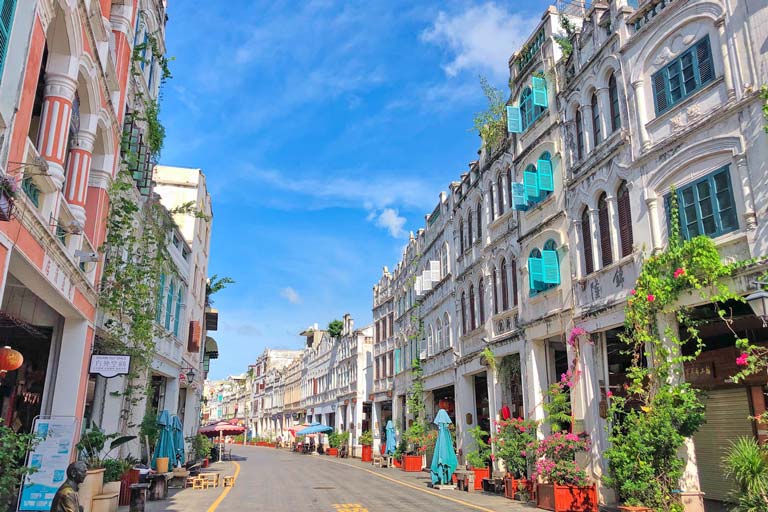 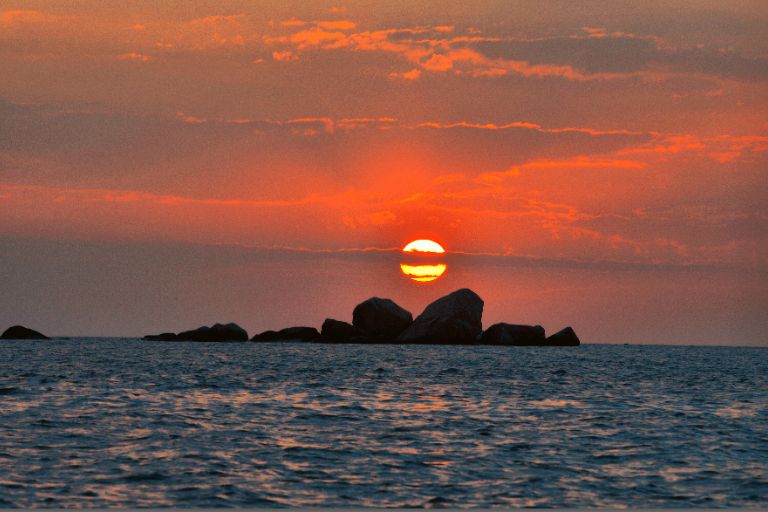 Let our professional travel consultant to help you with the hotel booking, airport pick-up and drop-off and day-by-day arranging! Even though Haikou has already built a convenience tourism system, it maybe still a troublesome thing to get to some top attractions in rural area, such as Leiqiong Global Geopark and East Harbour Mangrove Forest, etc. by yourself. Moreover, our experienced travel guide can take you on an immersive exploration of local food, culture and slow pace of life. The tour is customized for you with your interest, need, group size and every special requirement. If you are interested, please feel free to contact us! 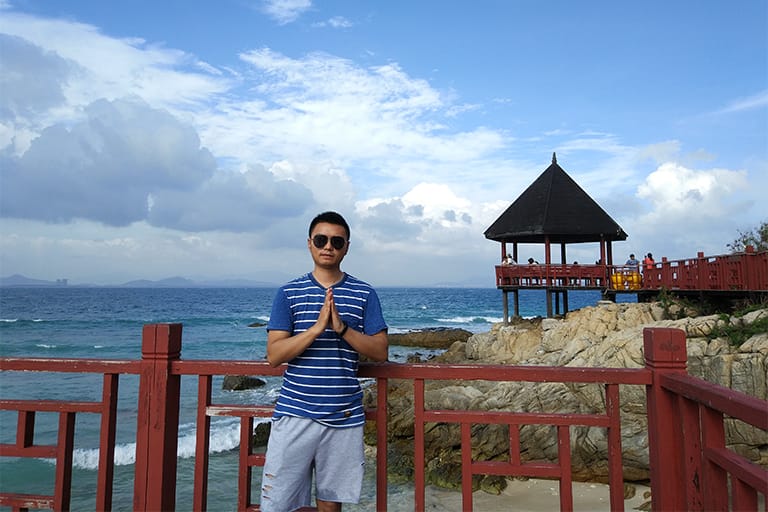 Top 3 Haikou tours chosen by most customers to explore Haikou in the best way. Check the detailed itinerary,or tailor your own trip now with us.