Kaili and around, in Southeast Guizhou, becomes the top destination to explore the ethnic daily life, cultures, festivals and more. If you want to have in-depth ethnic minority exploration, you could take Guiyang, Kaili, Rongjiang and Congjiang route. 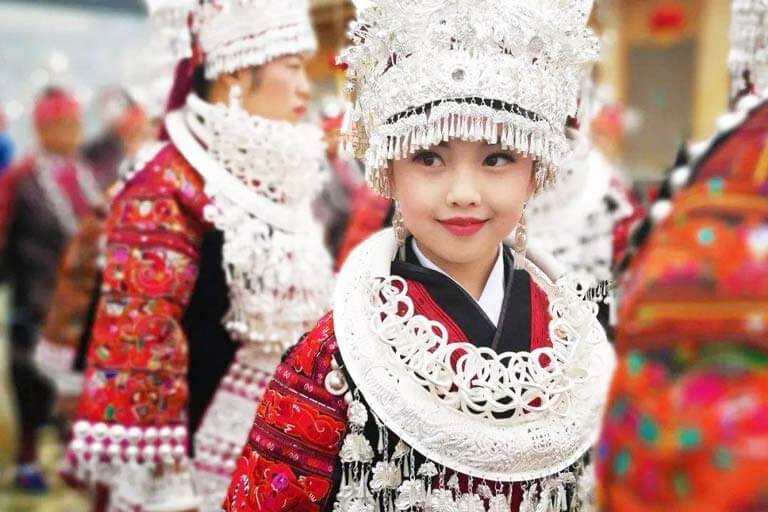 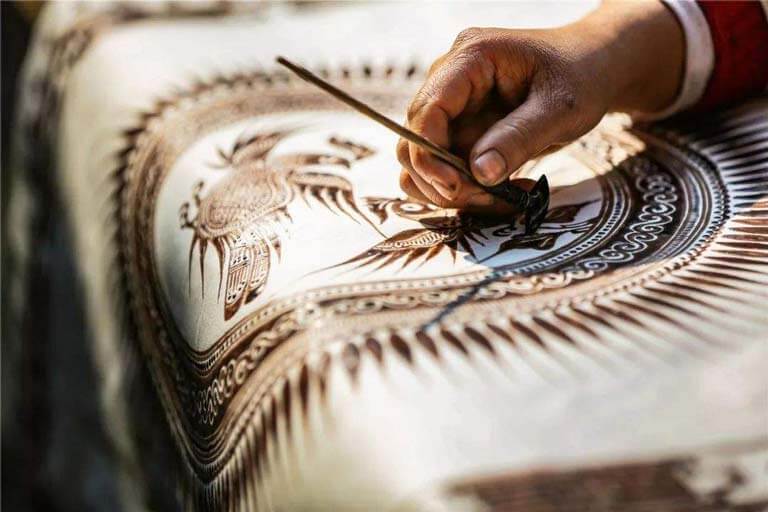 Miao people are very talented when it comes to weaving, embroidering, batik, paper-cutting and jewelry casting. The Miao silver jewelry casting and embroidery is very famous around China.

Due to their unique migration history, the Miao people form their own unique architectural style in materials and construction. Miao people prefer wooden buildings which are generally in three-floor construction. The first floor is usually a half-side house for stacking sundries or keeping livestock to solve the problem of uneven slope terrain. The second floor is the main house and the third floor is used to stack grain.

The panoramic scenery of the largest Miao Village in China - Xijiang Qianhu Miao Village is stunning. The village is surrounded by orderly terraced fields, presenting an idyllic landscape to visitors. Travelers can see wooden stilted houses, wind and rain bridges and experience colorful Miao’s singing, dancing and grand festivals. The commercial pedestrian street here sells a wide variety of goods of Miao minority. The most attractive one is the Miao silver ornaments with exquisite workmanship and cheap price.

With more than 20 minorities living harmony at Zhenyuan Ancient Town, it is also being praised as the “World Cultural Protection Circle”. There are a large number of historical architectures, traditional folk houses and ancient wharfs waiting for visitors to explore. Highlights in and around Zhenyuan Ancient Town are including Qinglong Cave, Shiping Mountain, Wuyang River, Tiexi Scenic Area, etc. Besides, visitors can extend their journey to Shidong Town (only 36km away from Zhenyuan Ancient Town, only take less than an hour by car) during Dragon Canoe Festival and the sister festival to experience the fun and bustling scenes. 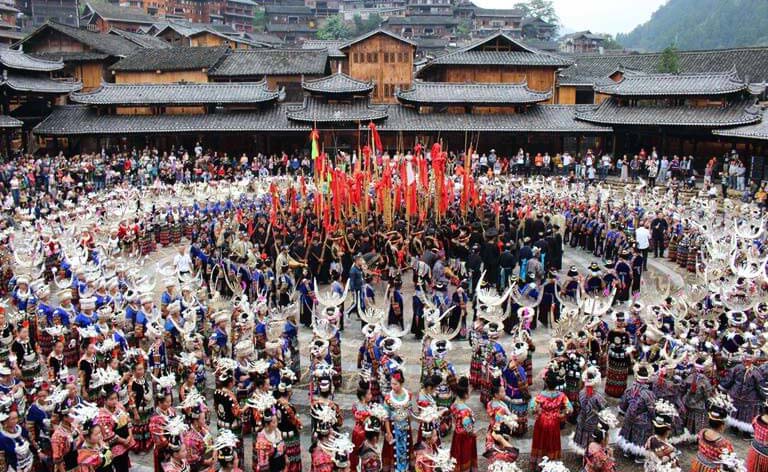 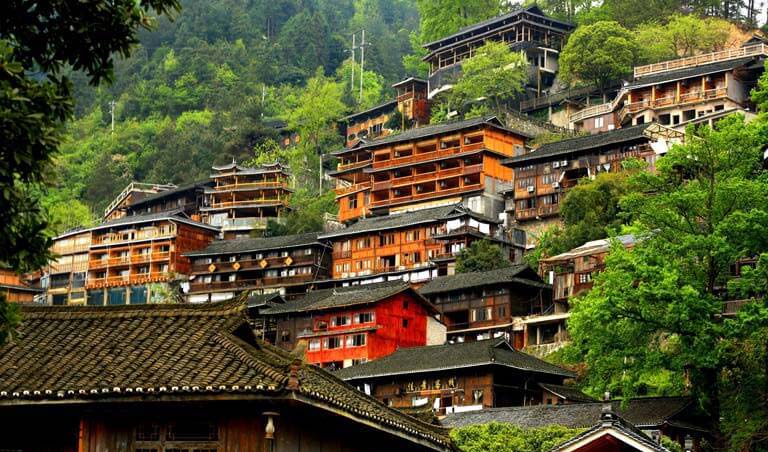 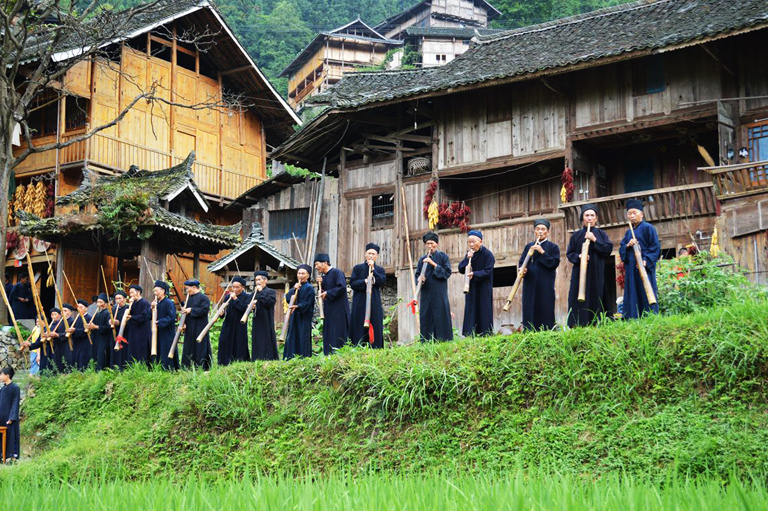 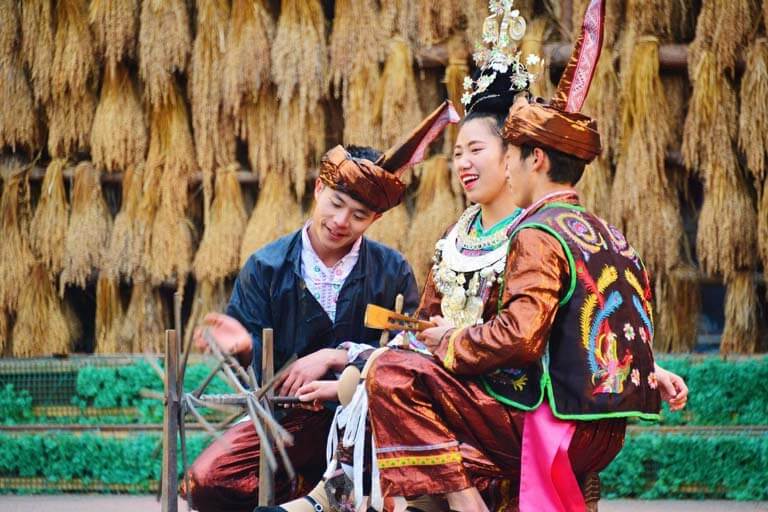 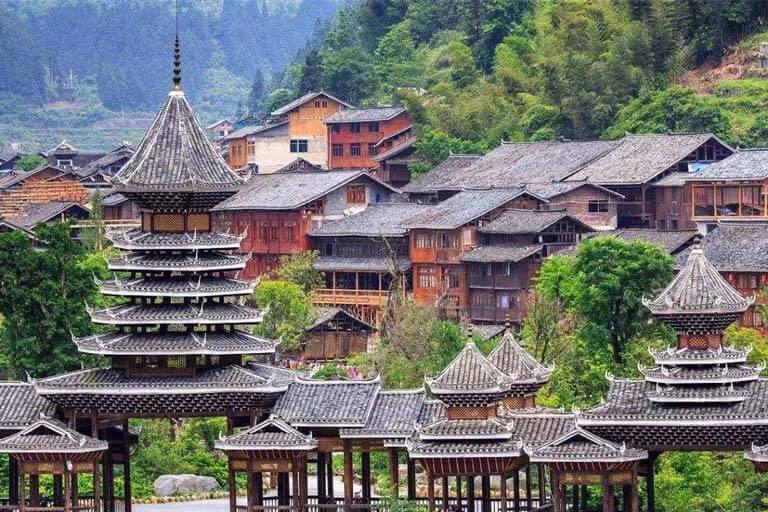 Generally, Dong villages has the characteristics of leaning against mountains and rivers. Dong Village is generally located in the place surrounded by mountains, layers of terraces, crystal stream and towering trees. The Dong houses, drum towers, bridges are made without nails. Dong Drum Towers and Wind and Rain Bridges usually house their gods and also use for gathering place for community events. While, Dong people live in villages of 20-30 households located near streams and some villages are very large with about 1000 households. Their houses , built in fir wood, are usually two or three stories high. The houses located on steep slopes, riverbanks stand on stilts. People usually live in the upper floors and the first ground floor is used for domestic animals and firewood.

The main food of Dong is rice. In the mountainous areas, glutinous rice is eating with peppers and pickled vegetables.

It was worth mentioning that the Grand Song of the Dong Ethnic Minority Group is famous throughout China also in the world. It is a kind of folk music and also a cultural treasure of Dong. Travelers could appreciate the Grand Song of Dong Minority in Xiaohuang Dong Village in Congjiang County, Guizhou.

Congjiang, Rongjiang and Liping, located in the southeast part of Qiandongnan Miao and Dong Autonomous Prefecture, are three top counties to appreciate the primitive Dong ethnic villages, culture and local traditional life. You may visit the largest Dong Village in Southeast Guizhou - Zhaoxing Dong Village or head to the idyllic Huanggang Dong Village in Liping County. Pay a visit to the hometown of grand song of Dong people at Xiaohua Dong Village in Congjiang County and continue to explore the primative village with mysterious legend in Zhanli Dong Village. If you have a tour plan to Rongjiang County, don’t miss the hidden pearl Dali Dong Village, it will take you back to hundreds years before. Check Top 5 Dong Minority Villages in Guizhou >>

Zhaoxing Dong Village, located in the southeast of Liping County, is one of the largest Dong villages in China and has been praised as "The First Village of Dong Township". Till 2012, it has more than 1,100 households and 6,000 residents. The village is built in a mountain basin. Two streams converge to form a small river passing through the village. Row upon row of stilted buildings are well-arranged in the village. Houses are all built of cedarwood, the hard top is covered with blue roofing tiles, simple but practical. Zhaoxing Dong Village is famous for its drum tower group, which has been listed in the Guinness Book of World Records and is honored as the "Hometown of Drum Tower Culture and Art". 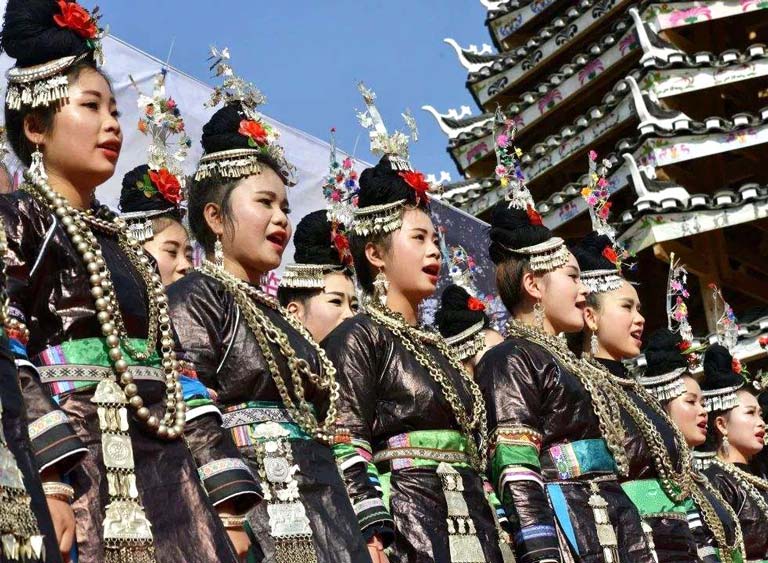 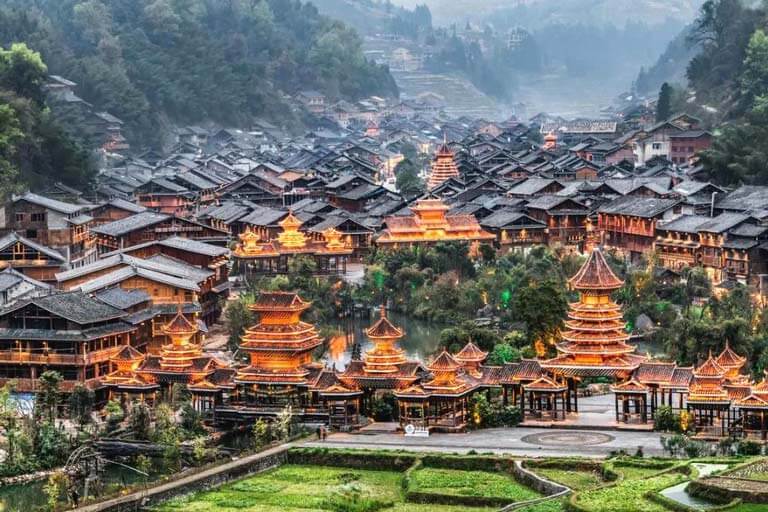 
Bouyei ethnic minority is the 11th largest minority of the 56 ethnic minorities. About 97% Bouyei people live in Guizhou province, in Bouyei-Miao autonomous counties in Xingyi and Anshun prefectures and Qingnan Bouyei-Miao Autonomous Prefecture in Guizhou Province. Some of other Bouyei people also live in Qingdongnan Miao-Dong Autonomous Prefecture or near Guiyang.

The Bouyei live mostly on plains or in river valleys in rural villages in two-storied houses. People often live on an upper floor and keep livestock on the lower. Bouyei people own a rich folk literature, including fairy tales, fables, folk songs, proverbs and poems. The Bouyei people are very skilled in arts and crafts and they make colorful and beautifully-patterned batik.

Buyi Cultural Festival (The sixth day of the sixth lunar month) is an important traditional festival for Bouyei people, also known as the local’s “Little New Year”. When the festival is approaching, each village begins to kill chickens and pigs, make triangular flags with white paper and animals’ blood, then plug the flag in the crop field to prevent locusts coming and eating the crops. According to the custom, men, women and children of the Bouyei ethnic group will wear national costumes and take glutinous rice, meat, water and wine to the hillside outside the village to “hide” (“hide” here means celebrate, many amusement activities are prepared that day).

Located 30km south from Libo County, Seven Small Arches Scenic area is surrounded by peculiar mountains and elegant water. Wandering around the vigorous and stylish scenic spot, visitors may wonder whether they are in a splendid landscape painting or in the real life. Seven Small Arches is a national 5A tourist attraction, being praised as the representative for Karst Landscape in South China and one of the most beautiful places in the world. Besides, visitors can continue to visit the “Arch of Triumph of the East” - the Seven Big Arches Scenic Area. 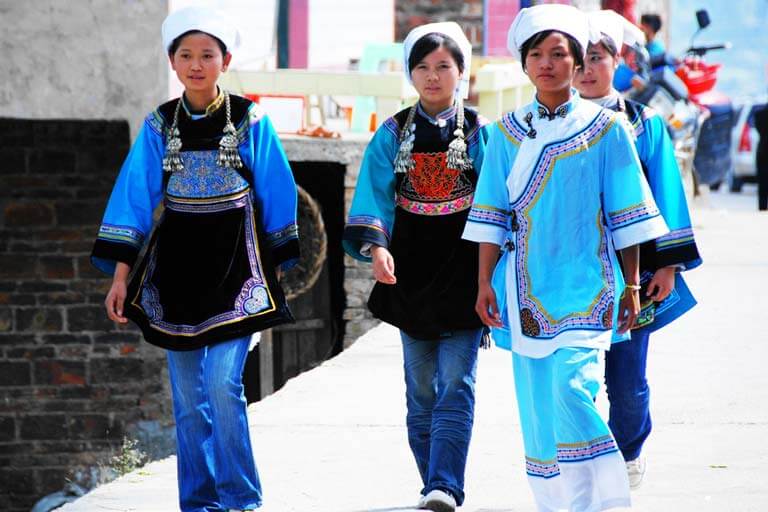 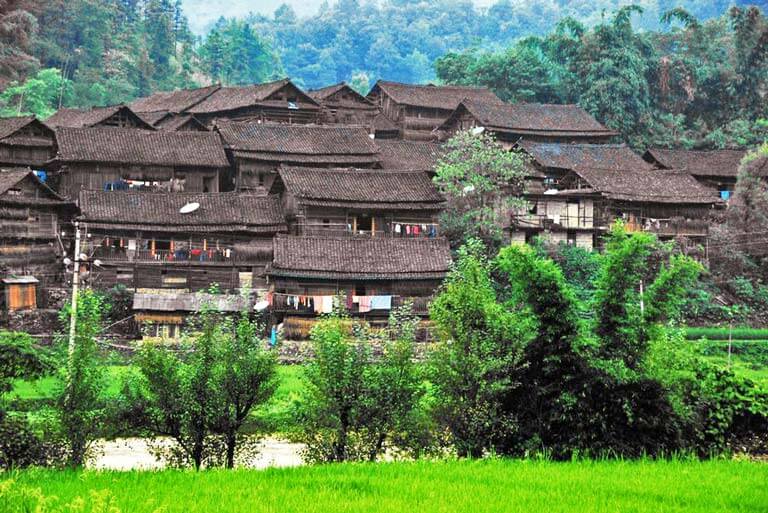 The Shui ethnic minority is known for their folk arts including paper-cutting, stone-carving, silver jewelry making, and batik techniques.

The Shui minority has their own calendar which basically follows the lunar calendar of Han people. Also, they have their own traditional festivals such as the Duan Festival, Mao Festival, Suningxi Festival, Jian Festival, Jingxia Festival.

How to Plan a Guizhou Ethnic Minorities Tour

For travelers who want to have a good exploration about Miao minorities can visit Miao villages in Guizhou, the top region to go is the Qiandongnan Miao and Dong Autonomous Prefecture. The capital of Qiandongnan is Kaili City with a few flights and many high speed trains linking with. If your time is limited within 2 to 4 days, you can just explore in and around Kaili City to see several Miao villages and experience their unique culture and customs. It is highly recommended to visit Langde Upper Miao Village, Xinqiao Miao Village, Matang Gejia Village, and Qingman Miao Village. For travelers who want to join in the crowds and have a good look at the largest Miao Village in this area, you can spend about one day visiting Xijiang Miao Village for both daytime view and night view. 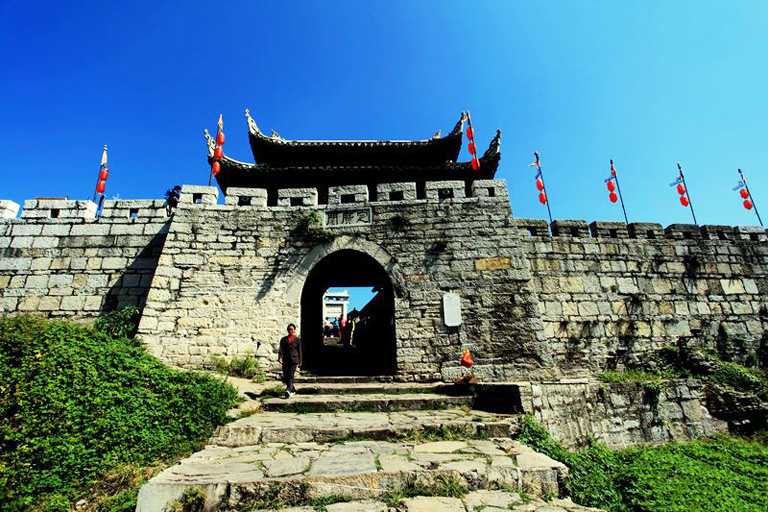 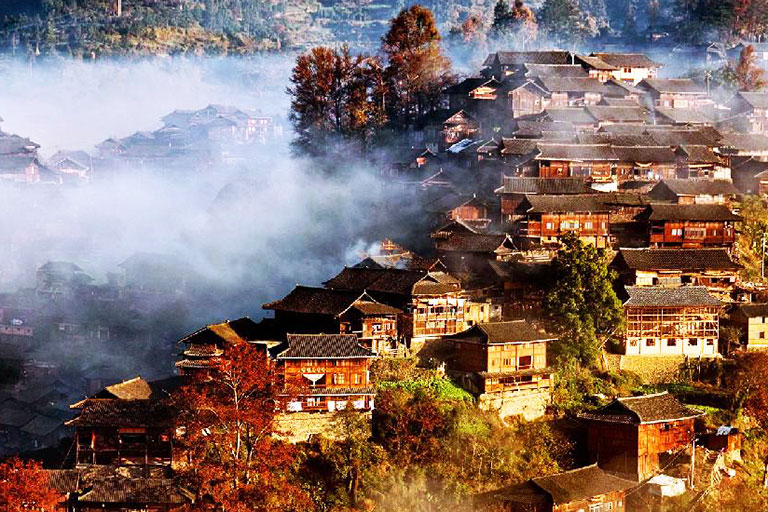 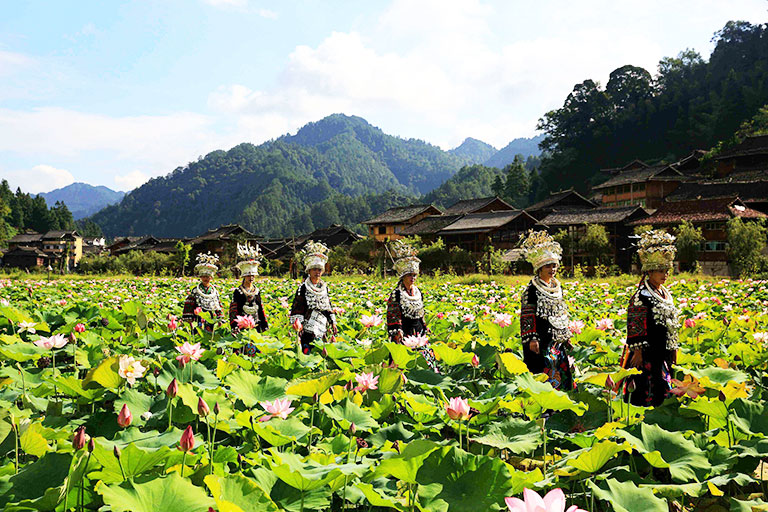 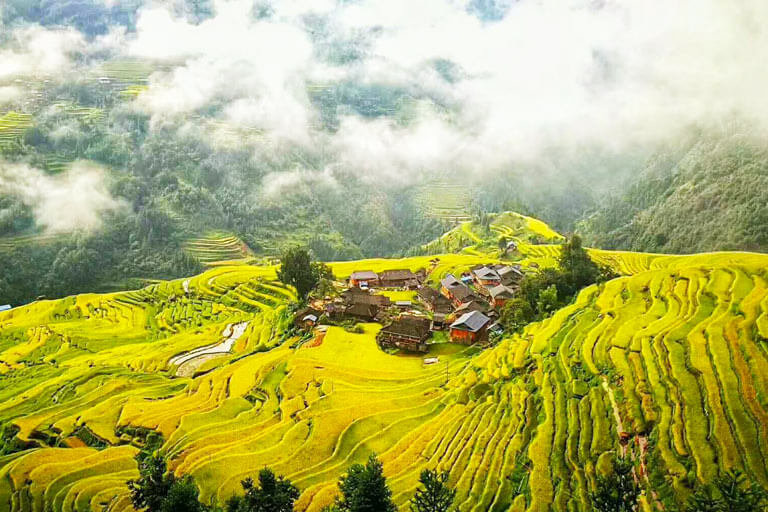 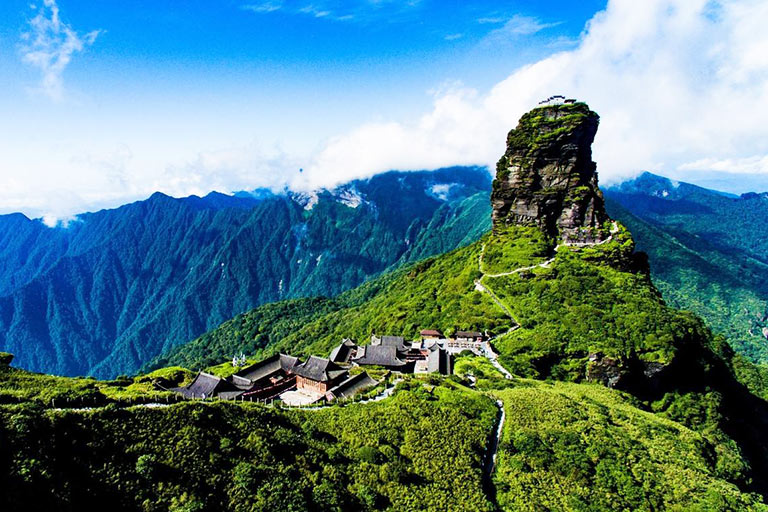 If you still have time and learn know more about the two remaining minorities - Bouyei and Shui Minority. You may continue your trip to Anshun or Libo. Besides primitive ethnic villages, there are many natural splendors waiting for you to explore, such as Huangguoshu Waterfalls, Small Seven Arches in Libo, Mount Fanjing in Tongren... Spending about 6 to 8 days traveling around Guizhou will be perfect to view all the best attractions! Travel with us now!

► How to Plan a Guizhou Tour

Have your own ideas of where to go and what to do in Guizhou Province?  Customize your personal Guizhou tour right now! The tour can be tailor-made according to your group size, time, physical condition, plan, interests, budget and any other special need!

If you travel with us, our experienced local driver and guide will tack care of everything for you. Our professional driver will await you at the entrance gate and then escort you to your next destination directly in ease and convenience. Besides, our English-speaking guide will accompany you all the way and give you warm insider tips of avoiding offending local custom taboos. If you are interested, please feel free to let us know!

This 6 days Guizhou tour will give you overall impression about the diverse Guizhou Province. You’ll start from the heart of Guizhou in its capital city - Guiyang.

This is the tour to take you to explore the diverse Guizhou - Hidden Ethnic Villages and Wonderland Fanjingshan, which is full of fun. 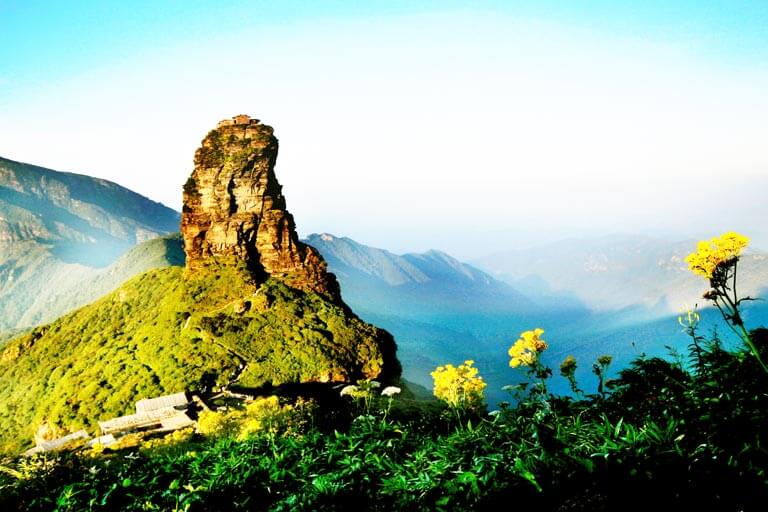 Wonderful 5-day vacation to Guiyang, Anshun and Fanjingshan to marvel at their culture, history and landscape! 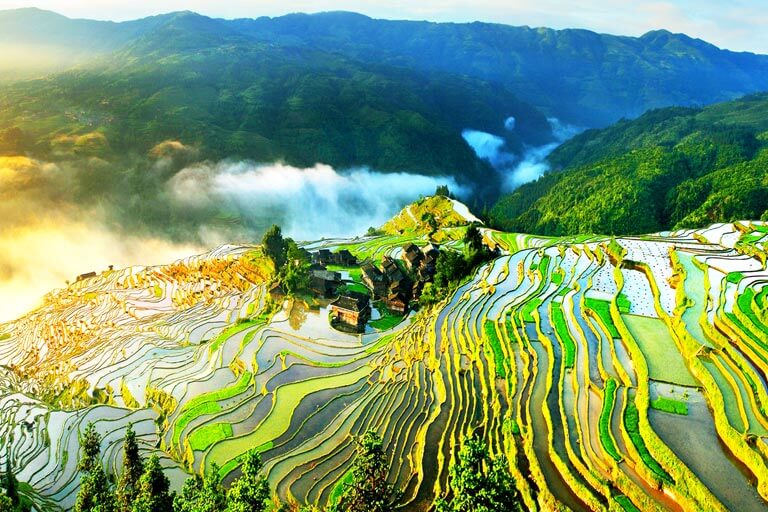 This 6 days Guizhou Miao and Dong ethnic tour is especially designed for travelers who want to have in-depth exploration in Southeast Guizhou, the last peaceful habitat for human being to rest their soul. 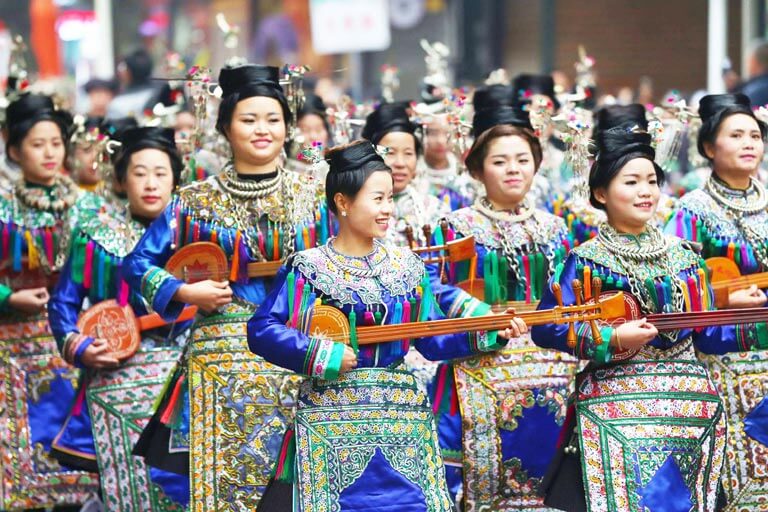 This 7-day Best of Guizhou vacation takes you to have the closest look at awesome natural treasures of special Karst landform and the best ethnic villages. 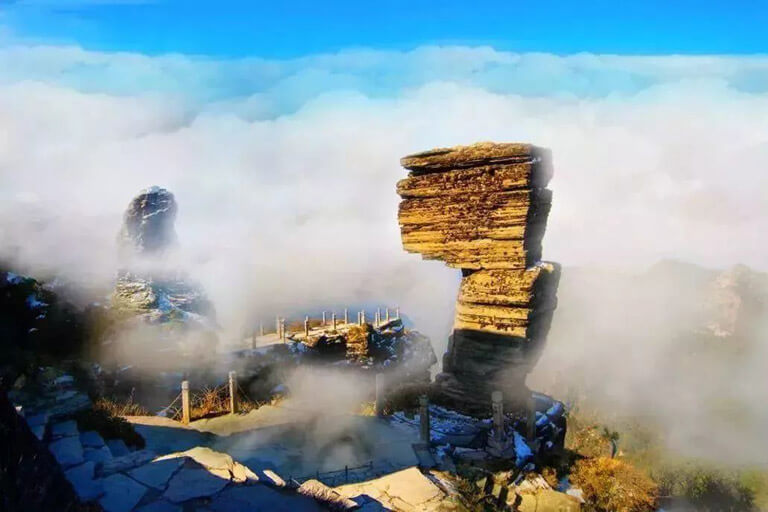 Both two places offer you some great opportunities to admire the beauty of our Mother Nature and experience local authentic culture. Extend your Guilin trip to Guizhou to visit the beautiful villages as well as the NEW Star - Fanjingshan.

This tour offers you an off the beaten path route to explore the real life of the local ethnic minorities, appreciate the marvelous Karst landscapes and enjoy a leisurely life in the rural villages.