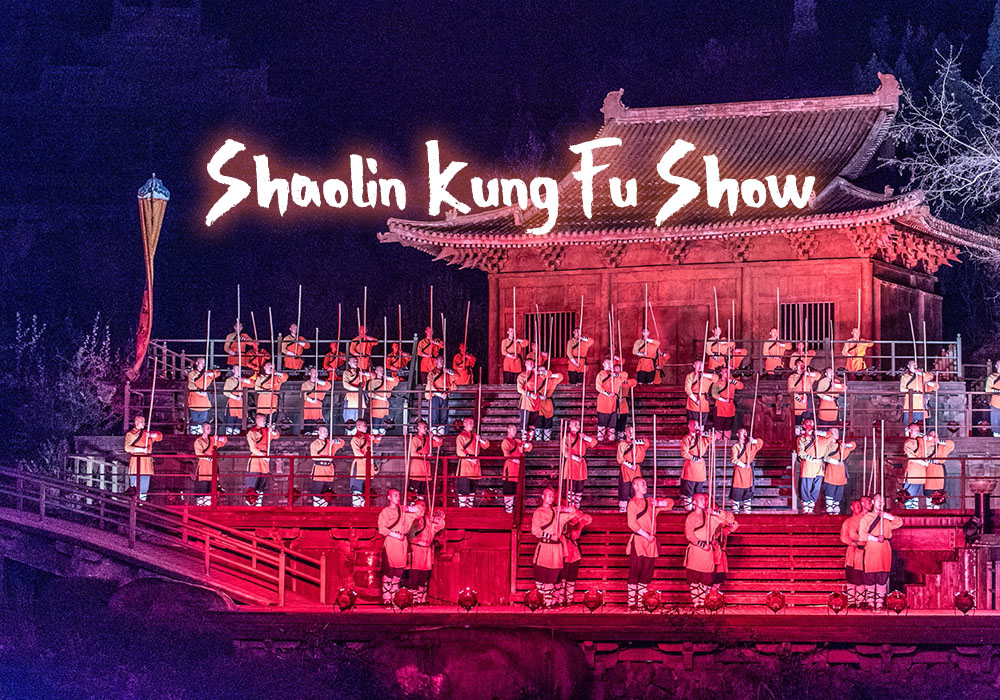 As the birthplace of Shaolin Kung Fu, Shaolin Temple is not completed without its Kung Fu culture. Besides learning Kung Fu from the masters in the temple, most short-term visitors will go to watch the stunning Kung Fu show in Shaolin Temple. Presently, there are two places to watch Kung Fu Show in Dengfeng, one is inside the Shaolin Temple scenic area in a small martial arts hall and it’s usually free to go in the daytime, and another one is on a large scale and only scheduled to perform at night with over 600 Kung Fu performers. The followings are detailed information about Shaolin Kung Fu Shows to help you plan your Shaolin Temple tour with Kung Fu shows. 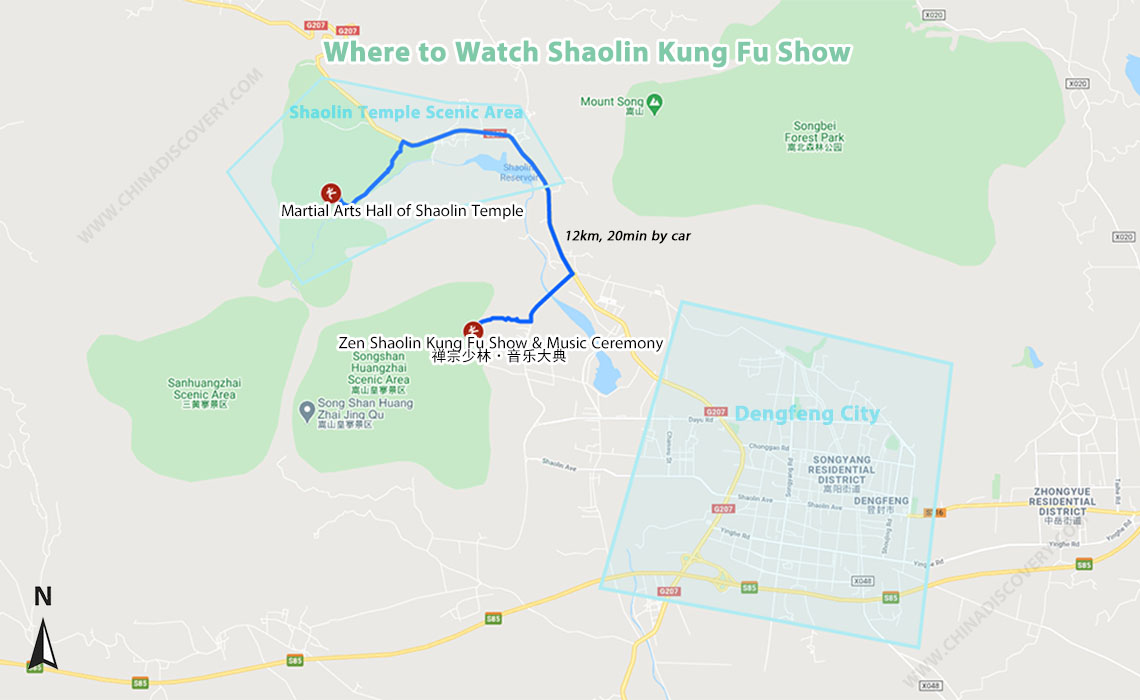 1. The largest stage lighting system in the world: More than 2800 lamps controlled by computers stretch from the foot of the mountain to the top of the 1400 meter high mountain.
2. The biggest stage project: The stage covers an area of 5km.
3. The largest man-made moon in the world. The moon rises slowly from the dense forest of Mt. Song. The moon is controlled by a computer and can be changed into wax or wane with a diameter of 20 meters.
4. The world's most difficult flying martial arts performance: In the dark night, the monk soars into the sky, flying, rolling, and fighting at a height of about 80 meters.
5. The largest-scaled monk chanting: Hundreds of martial monks and several eminent monks of Shaolin Temple go to the scene to chant before the audience with music played by the traditional Chinese instrument Guqin. 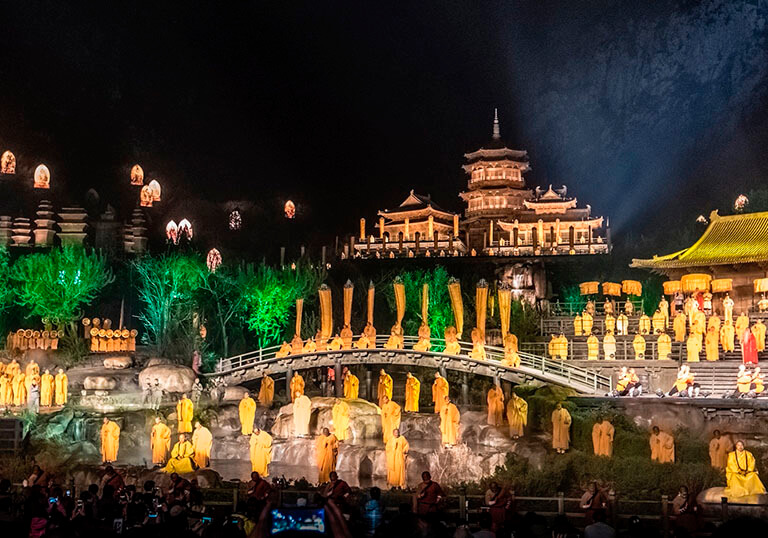 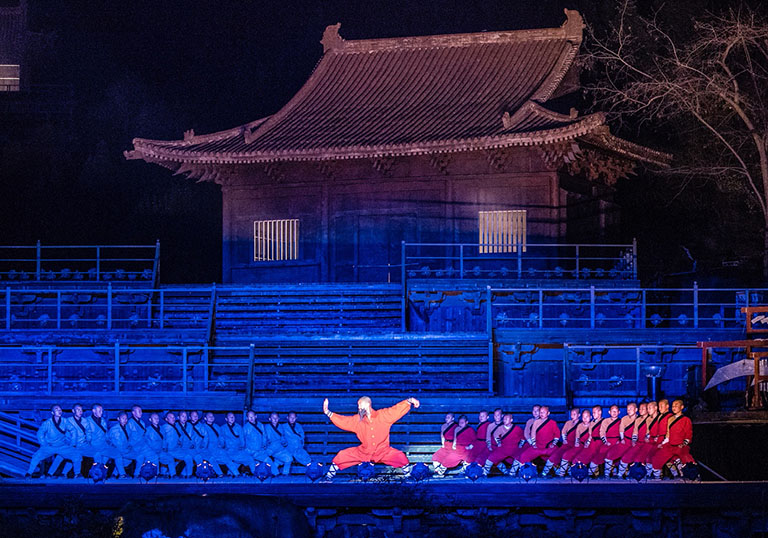 • Wood Music - Zen Meditation: The legendary shepherdess comes, and the singing breaks the monks’ meditation and brings audiences to this world of Buddhism...

• Wind Music - Zen Force: Starting from "Damo face wall", it tells about the inheritance of thousands of years of ancient customs of the Shaolin martial arts and explains the relationship between Zen and martial arts...

• Light Music - Zen Enlightenment: It is a colorful movement, which directly faces life and death, Buddhism, and secular life, expressing Zen's willingness and praise for all living beings...

• Stone Music - Zen Chant: It is a chanting performance, using the ancient stone of Mt Song as musical instruments. At the end of the performance, the huge lighting Buddha appears in the mountain...

▶ Tips: 1. The temperature drops a lot at night in the mountain area. Please bring or wear an extra layer when watching the show. 2. Since it is an outdoor show, the actual performing time may be subject to change depending on the weather condition. 3. It will have a seasonal close-down in winter due to the cold weather, please contact us for the actual performing date.

▶ Book a Ticket in Advance: The Shaolin Temple tickets are limited and get easily sold out, especially in the peak season, and you may need to book the tickets in advance. However, the ticket booking system has not opened for any non-Chinese citizens yet and foreign visitors can only book tickets through a licensed China tour agency like us. Please do not hesitate to contact us for ticket booking help! 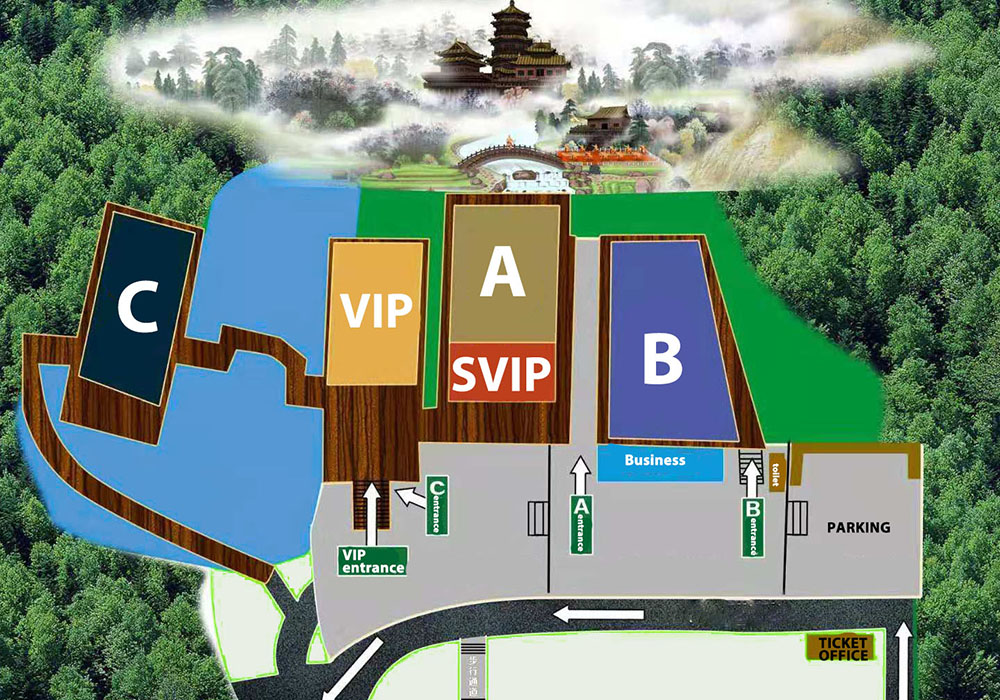 After entering Shaolin Temple Martial Arts Hall, you can go upstairs or downstairs and find a seat to watch the show, but after all, there are never enough seats for all the audiences. Especially during the peak season, you can see many tourists lining up to wait for their turn to go in and have a look, and the room is very crowded, so it's recommended that you avoid Chinese holidays and visit the temple before 10 o'clock to watch the show. Sometimes, due to the irregular events, the Kung Fu show might be arranged in the open space outside the Hall. Usually, it takes about 2 hours to visit the Shaolin Temple. When you come out of Shaolin Temple and go down the mountain along the road, you may encounter some young monks and apprentices practicing martial arts in the open space or in the woods along the road. Watching them practicing the patterns in the yard and woods is also very interesting. 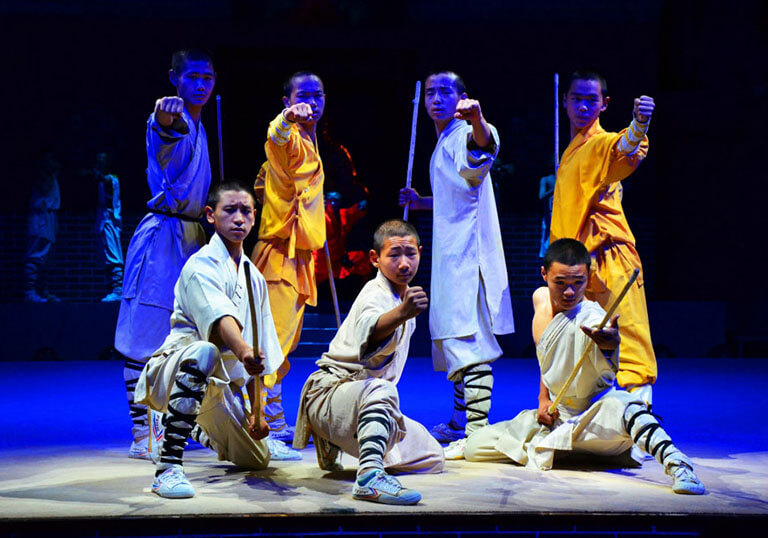 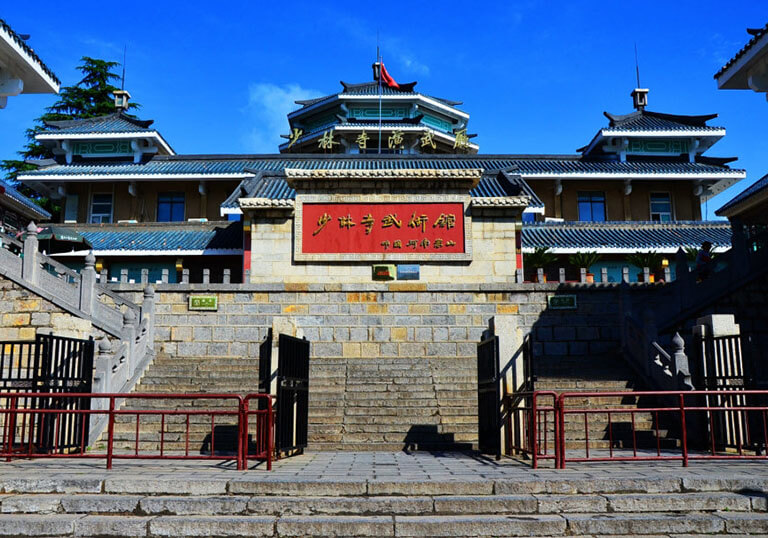 ▶ Tips: 1. You may need to get to the Martial Arts Hall 30min to 1 hour earlier before the show to line up. 2. If there are alreay lots of people waiting for the show outside the Martial Hall, you are recommended to visit the Shaolin temple first and head back for the show later.

Usually, one day is enought to visit Shaolin Temple - the birthplace of Chinese Buddhist Zen and Chinese Kung Fu (Martial Arts). One-day Shaolin Temple tour is a classic itinerary covering the best essence, which takes you to admire the sacred shrine with 7 courtyards, the Pagoda Forest and lots of ancient architectures. Besides the sightseeing, you can also watch a wonderful Shaolin Kung Fu show and even join in a short-period Kung Fu training class to learn some basic styles. Love nature and physical condition allows? Take half a day more to do an excursion on Sanhuang Village of Mount Song, walk on the amazing roads cliffside and witness unique mountain landform.
If you have one more day and are quite interested in ancient Chinese culture, Luoyang is another must-visit destination in Henan. The awesome Longmen Grottoes stretching by the riverside and China’s first Buddhist temple - White Horse Temple are iconic sites for your Luoyang tour. Still, there are many remarkable cultural and natural sights in Henan worthy your exploration, including the spectacular Yuntai Mountain, mysterious Guoliang Village, interesting Yin Ruins of Anyang, ancient capital Kaifeng, etc. Finishing your Henan tour, you may extend your journey to Beijing, Xian and other major destinations in China as you want. You can choose from our most popular China Shaolin Temple tour packages or contact us to customize a trip based on your requirements.

Private tour package with your own English-speaking guide and private driver. dig deeper into the very essence of Shaolin Temple. The Best local price guaranteed.

Driving about 1 hour 45mins from Zhengzhou to Shaolin Temple to experience real authentic Shaolin Kung Fu and extend your tour to nearby Longmen Grottoes with well organized itinerary and private tour guide.

Experience solemn ancient imperial culture in Beijing, and take a wonderful walking on the Great Wall, then take a high speed train to Luoyang to visit the magnificent Longmen Grottoes and Shaolin Temple. Finish your trip at Xian which has the world-famous site - Terracotta Warriors. 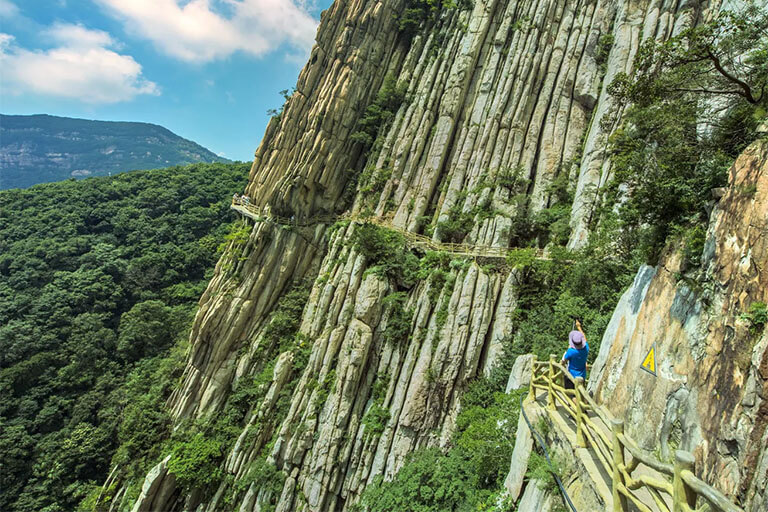 This tour starts from Luoyang (Zhengzhou also available), visit Shaolin Temple and hike Mount Song, then return to Luoyang to visit Longmen Grottoes. It is a trip of diverse experiences.