Hangzhou and Suzhou both are close neighbors of Shanghai Province. Hangzhou is located in the southwest of Shanghai, while Suzhou is located in the northwest. Due to their prosperity and enduring popularity since the ancient time, Suzhou and Hangzhou has been fondly called “Suhang” by Chinese. High Speed Trains make it easy and fast to transfer between the two ancient and popular tourist cities. Currently, there are 26 High Speed Trains travel from Hangzhou to Suzhou every day, including 22 G-trains and 4 D-trains. Both morning trains and night trains are available.

Hangzhou Railway Station is also locally referred to as the Chengzhan Railway Station (城战火车站). It is located about 25 min’s driving (around 13km) to the West Lake Scenic Area (西湖风景区) and about 35 min’s driving (29km around) to the Hangzhou Xiaoshan International Airport (萧山国际机场). Convenient transportation means are available there, including the Metro Line 1, Airport Express Bus Lines, Public Bus Lines and taxi.

Suzhou Industrial Park Railway Station, which also called Huning (Shanghai-Nanjing) Chengtie Yuanqu Railway Station, is a vital station on the Suzhou section of the Shanghai Nanjing Intercity High Speed Railway. No metro lines have already covered there, but with under construction metro line 3 and two other planning lines that will cover there.

Usually, there are three kinds of tickets are provided on high speed trains, Business Class Seat, First Class Seat and Second Class Seat. Second Class Seat is the most budget level you will share a row space with other passengers. And the First Class of Seat is more comfortable and quiet for those who prefer a good rest on the way. If you would like to try the most luxury and superior train travel experience, the Business Class better than the business level on airplane will shock you beyond expectation. Check All Types of Seats on China High Speed Train> 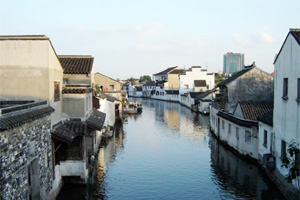