Traveling from Beijing to Xian and stopped off for two days in Pingyao is a good idea to explore what Old China looks like. Once you finish your Beijing tour, you can keep on searching more Chinese traditional culture and history in Pingyao Ancient City, which is still in authentic looks and arrangement. When strolling around the well-preserved streets and buildings, it seems you stepping back in time and into a Chinese movie set. Even you can imagine how busy and bustling once China was through this microcosm. Such a dream journey can be easily achieved by a 4 hours’ high-speed train journey from Beijing.

Beijing Pingyao High-Speed Railway, joined by three railway sections, is a high-speed railway connecting Beijing and Pingyao in northern China. It is only 606 kilometers long and drives across three provinces, namely, Beijing, Hebei, and Shanxi. All high-speed trains leave from Beijing West Railway Station and getting to Pingyao Ancient City Station in Pingyao after 4 hours' train journey.. The Beijing-Shijiazhuang section on Beijing Guangzhou High Speed Railway is the first segment with a length of 281 kilometers. The second part is the 232 kilometer-long Shijiazhuang-Taiyuan High-Speed Railway and the last Taiyuan-Pingyao section is on the Datong Xian Passenger Railway.

• Useful Links: Beijing Pingyao Tours Pingyao to Beijing Train Schedules | How to Get to Pingyao

Location: No.13, Maojiawan Hutong Jia, Dongcheng District, Southeast Beijing (北京市东城区毛家湾胡同甲13号)
Distance: It is about about 5km to the Palace Museum/Tiananmen Square. The Facade of Beijing Railway Station

Pingyao Ancient City Station (aka Pingyao Gucheng Railway Station) is a newly built high-speed train station serving tourists to Pingyao Ancient City. The station delivers about 34 high-speed trains, including 2 pairs of G trains between Beijing and Yuncheng, and Beijing and Yongji and more than 30 D trains to Beijing, Xian, Chengdu, Chongqing, Lanzhou, Qingdao, Jinan and lots of prefecture-level cities in Shanxi Provinces. Except for taking a taxi, tourists can also take the local Bus 108 to reach the Ancient City from this station. The bus departs every 15 minutes from 7:00 am to 8:30 pm. Read more about Pingyao Maps 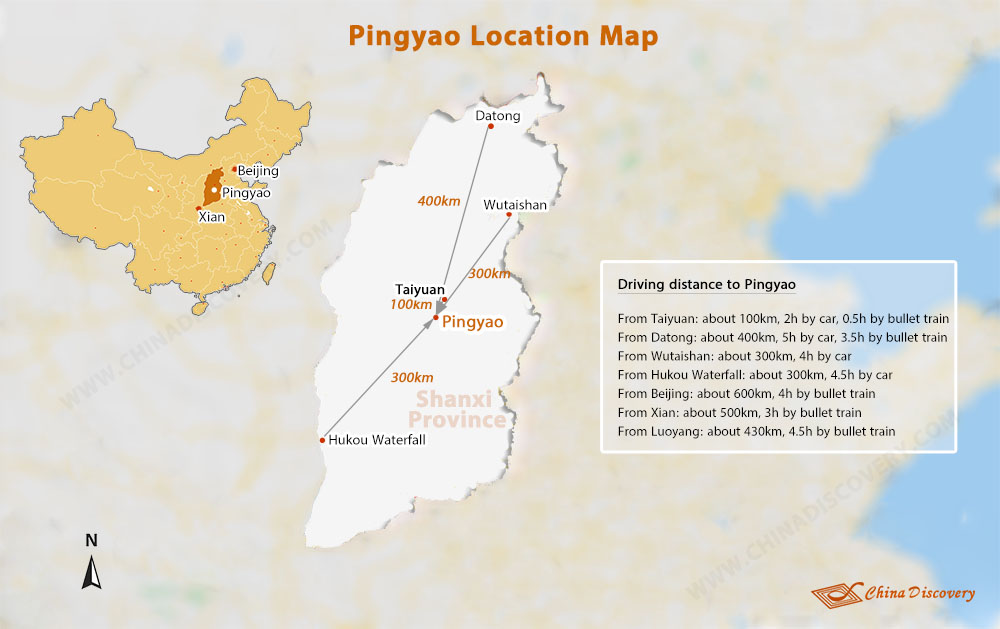 How to Plan Your Beijing Pingyao Tour

About 600km away from Beijing, Pingyao is noted for the World Heritage Site - Pingyao Ancient City. It is well-preserved, keeping the architecture style of the Ming and Qing Dynasty (14th-20th centuries). Here, you can leisurely stroll and get to learn about the traditions of the northern Chinese, especially during the Chinese Spring Festival. Usually, 2 to 3 days are enough for you to explore the attractions in Pingyao, including scenic sites and ancient streets of Pingyao Ancient City, Qiao’s Family Compound, Shuanglin Temple, etc.

There are three kinds of tickets are provided on high speed train from Beijing to Pingyao, Business Class Seat, First Class Seat and Second Class Seat. Second Class Seat is the most budget level you will share a row space with other passengers. And the First Class of Seat is more comfortable and quiet for those who prefer a good rest on the way. If you would like to try the most luxury and superior train travel experience, the Business Class better than the business level on airplane will shock you beyond expectation. Check All Types of Seats on China High Speed Train>