Chengdu Guilin High Speed Rail is the major part of Chengdu Guangzhou Rail. Except Guilin, the whole Chengdu Guangzhou journey passes through Chongqing, Zunyi and Guiyang before arrives at the last Station Guangzhou. This route makes a closer connecting of cities located in South part of China.

Chengdu and Guilin are both hot tourist cities of China. The history of Chengdu can be traced back to 3200 years ago. Culture and History elements can be easily found when traveling this “old city”. In nowadays, Chengdu is widely known for its lovely pandas, leisure lifestyle and numerous nearby UNESCO World Heritages Sites. “East or west, Guilin is the best”. Though the history of Guilin can be traced back to 12,000 years ago (the Neolithic Age), Guilin enjoys more popularity by its wonderful scenery rather than the history and culture. Along the Chengdu Guilin journey, travelers can have a deep feeling of Chinese charm, including the history, culture and beautiful scenery.

Chengdu East Railway Station is the only available Railway Station for High Speed Trains travel from Chengdu to Guangzhou via Guilin. Thus it will save a lot of time to find the exact railway station for the newly coming travelers.

Chengdu and Guilin are both tourist cities located in the south part of China. The life in the two cities is totally different from that in Beijing and Shanghai. People enjoy more peace and leisure there. Usually you are recommended to spend 1~2 days to explore Chengdu and 4~6 days to visit its nearby attractions. 3~5 days are needed to explore the beauty of Guilin. If you are planning a Chengdu Guilin tour or a separate tour over the two cities, you can check the following maps as reference. If you are interested in more map information, you can also get more Chengdu Maps and Guilin Maps from here.

China has world’s largest and still expanding High Speed Rail network, stretching over 25,000 kilometers (15,534 miles). By taking High Speed Train, you can get to almost every city of China including the tourist cities like Beijing, Shanghai, Guilin, Huangshan, Chengdu, Chongqing, Hangzhou, Suzhou, Wuhan etc. Check the below most popular China high speed train route maps, and find the perfect suit route for yourself. If you are interested in other route or cities, you can check all high speed train routes and more maps here. 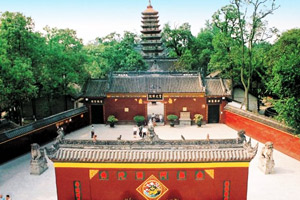